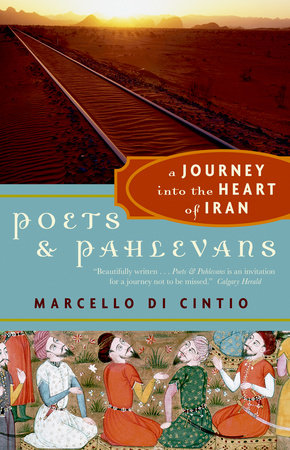 1. Di Cintio tells us that Tehran did not look like his “dream of Iran.” What do you imagine his dream of Iran was? To what extent did he find it?

2. Di Cintio looks for the spirit of the country mostly in rural areas and in what remains of Iran’s ancient past. What are the advantages and disadvantages of such an approach?

3. What effect does the author’s concentration on poetry and wrestling have on your engagement with the book and your understanding of Iranian society?

4. The culture of the pahlevan promotes the idea of “perfect men” who combine strength with gentleness. Do you see cultural equivalents in, for example, mythology, chivalric legend or Hollywood movies?

5. The author expresses “surprise” at finding IKEA furniture, black bras and Chris de Burgh CDs in Iran. Can you offer a fuller analysis of his reaction?

6. When the author sees a farmer sleeping among grapevines, he writes, “I wanted his life.” Why does travel make him desire less rather than more? Do you think he would be content as an Iranian farmer?

7. If Di Cintio had been able to speak with Iranian women, what do you think they would have told him?

8. Though not a Muslim, Di Cintio observes the tradition of passing under the Quran in a gateway in Shiraz, and later attempts to fast during Ramazan. As the Iranians do not expect this of him, why does he do it?

9. Di Cintio writes of Jeremy, his wrestling partner, “Like me, he wanted to reconcile his creativity with combat.” What do you understand from this, and what does it tell you about the book?

10. Iranians are extraordinarily welcoming to a stranger, yet suspicious and disparaging of their countrymen in the next town or village. Do you think a visitor to your own country would encounter the same reception?

11. What examples of permanence does Di Cintio discover in a place of revolution and upheaval?

12. Di Cintio reports hearing many opposing attitudes to the West and to recent Iranian history. He does not attempt to choose between them or to reconcile them. How do you feel about this as a reader?

13. Which incidents or conversations in the book remain vivid in your mind after reading it? Can you explain why?

14. How has reading Poets & Pahlevans changed your view of Iran, wrestling, or poetry?

Are You Really Going to Eat That?
Robb Walsh

Cooking for the Common Good
Larry Stettner and Bill Morrison

City of the Soul
William Murray

France in Mind: An Anthology

Not Quite Paradise
Adele Barker

Wake up and Cook
Tricycle Magazine

Wife of the Chef
Courtney Febbroriello

Spain in Mind: An Anthology

The Shameless Carnivore
Scott Gold
Back to Top