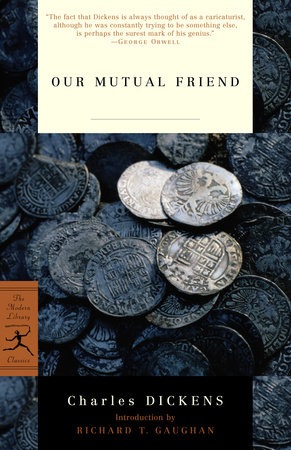 1. Many of Dickens’s contemporaries thought the world of eccentrics depicted in Our Mutual Friend went too far. Do you think this conceit got away from Dickens, or did he have a purpose?

2. Henry James, in his review of Our Mutual Friend in The Nation, says “In all Mr. Dickens’s stories, the reader has been called upon . . . to accept a certain number of figures or creatures of pure fancy. . . . He was, moreover, always repaid for his concession by a peculiar beauty or power in these exceptional characters. But he is now expected to make the same concession with a very inadequate reward.” Does Dickens offer little reward?

3. Do you think Dickens originally meant to have Boffin have a change of heart?

4. Some scholars characterize Dickens’s work as giving a voice to the masses that, in his society, were never heard. Is this true of his Jewish characters? Consider the character of Riah and the role he plays in Our Mutual Friend. Do you think Dickens was anti-Semitic?

5. Consider Bella Wilfer and John Harmon/John Rokesmith’s relationship. Was Dickens making the novel neat when the betrothed couple truly falls in love, or was he creating a plot twist? Is this a comment about marriage?

6. Could it be said that Jenny Wren and the life she leads is the true heart of this novel?

Middlemarch
George Eliot
Back to Top