Lake in the Clouds Reader’s Guide 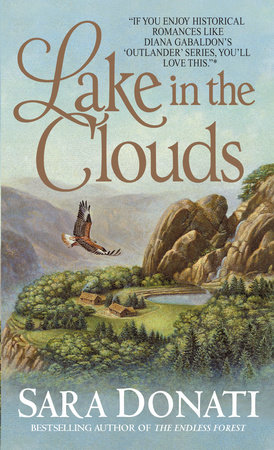 Lake in the Clouds Reader’s Guide

The questions, topics, and author biography that follow are intended to enhance your reading of Sara Donati’s Lake in the Clouds. We hope they will enrich your experience of this adventure-filled novel.

It is 1802. Lake in the Clouds continues the story of Elizabeth, Nathaniel, and Hannah, Nathaniel’s half-Mohawk daughter. A gifted healer, this beautiful young woman finds herself in peril when a dangerously ill runaway slave is discovered near the family’s home. Hannah’s determination to nurse the outlaw places both her family and her heart in jeopardy … for the bounty hunter tracking the runaway is Hannah’s childhood friend and first love. With the precise detail and powerful emotion that only a gifted storyteller achieves, Donati draws readers back to the dawn of our country where the rawness of the land and the challenge of survival come to life. Weaving adventure through the fabric of history, Lake in the Clouds reveals the passion in our pioneer spirit.

1. Nathaniel’s voice has such power over Elizabeth that when he speaks, her anxiety seems to give way to relief and pleasure. What are some examples of this? Are there situations in which Nathaniel does not have this effect on Elizabeth’s uneasiness?

2. Discuss the dynamics between the servants and the slaves in the Kuick household. In what ways are the two similar and/or different? How do they interact with one another?

3. Hannah felt that she did not belong in New York City. Why? Where do you think she belongs?

4. What effect does the riot in New York City have on Hannah and Ethan? What are their feelings on the city’s reaction to the display?

5. Selah left a lasting impression on many of the main characters. What are some of the life lessons she taught to these characters?

6. What are some changes that the Bonner family noticed in Liam since they had last seen him in Paradise? What about him has stayed the same?

7. Why didn’t Liam expose Elizabeth and Nathaniel’s fraudulence on the ship? Do you think he would have turned them in if he had found Selah on board?

8. Lily was easily bored and often unsettled, and had turned inward since Robbie’s death. What helped to recapture her attention and imagination? Do you see a major change in her by the end of the book?

9. Discuss the multitude of purposes Jemima Southern’s pregnancy served for her. How did her marriage to Isaiah change the dynamics of the home?

10. Why do you think Jemima believes that the worst thing a woman can do is to show a man that he has power over her? Does she find herself vulnerable to a man at any point in the story? Do you think that any of the other female characters in this book would agree with Jemima’s view?

11. What are some examples of the personality conflicts between Elizabeth and Nathaniel? What do you believe is at the root of their differences? What do they learn from one another?

12. Discuss the similarities and differences between Nathaniel and Daniel. What sort of man do you see Daniel becoming?

13. What is the turning point in Hannah’s indecision about marrying Strikes-the-Sky? What does he teach Hannah about herself?

14. Do you believe that Elizabeth finds closure in both Robbie’s and Selah’s deaths by the end of the book? What event plays a major role in this?

15. Gabriel Oak says, “The more that is taken away, the more clearly will thou see the value of what is left behind.” Which characters in the book is this true for? Which ones made an effort to appreciate what was left behind? Which ones gave up?

16. Discuss the symbolism of the characters’ Indian names. (i.e. Walks-Ahead, Bone-in-Her-Back, Hawkeye, etc.) Why do you think the author chose these names for the characters?

17. Most of the characters in this book have dealt with an eminent amount of loss. How have these losses shaped the characters’ weaknesses and strengths?

From the Hardcover edition.
Learn More About Lake in the Clouds
print
Back to Top