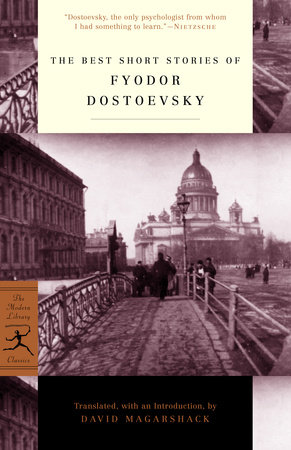 1. The philosopher Friedrich Nietzsche once wrote that Dostoevsky was the "only psychologist" from whom he ever learned anything. Discuss the psychological dimensions of Dostoevsky’s stories: in what ways does he illuminate human personality, passion, motivation, and character, and the role of the irrational in the human psyche?

2. What attitudes toward an analysis of religion-one of Dostoevsky’s great themes-can you discern in the short works contained in this volume? Are his ideas about or insights into religion consistent from story to story? Do they vary?

3. "Notes from the Underground," Dostoevsky’s most important and influential short novel, was in part inspired by distaste for a novel by Nikolai Chernyshevsky entitled What Is to Be Done?, a utopian work that embraces notions of human rationality, scientific determinism, and human progress. In what ways does "Notes from the Underground" respond to or critique such notions? What kinds of insights into human nature and its workings does this crucial work provide?

5. Many of Dostoevsky’s short works-particularly "A Gentle Creature"-were inspired by events in his own life (see David Magarshack’s introduction to this volume). In what ways, in your view, does Dostoevsky put personal experience to work in his art?

6. As David Magarshack notes, "lack of sympathy," or the "failure to realize what is passing in another human being’s heart," is a central theme for Dostoevsky, one rendered in an especially poignant way in "A Gentle Creature." How is this theme articulated in the various stories in this collection?

7. Many of Dostoevsky’s main characters could be described as dreamers (the protagonists of "White Nights," "Notes from the Underground," and "The Dream of a Ridiculous Man," for instance). Why is dreaming important for Dostoevsky’s protagonists?

8. Would you say that Dostoevsky offers a realistic portrayal of Russian life and society?

A Hero of Our Time
Mikhail Lermontov

The Yellow Wallpaper and Other Writings
Charlotte Perkins Gilman

Notes from Underground and the Double
Fyodor Dostoyevsky

The Double and The Gambler
Fyodor Dostoevsky

The Awakening and Selected Stories of Kate Chopin
Kate Chopin

The Book of Disquiet
Fernando Pessoa

Metamorphosis and Other Stories
Franz Kafka