A Study in Scarlet Reader’s Guide 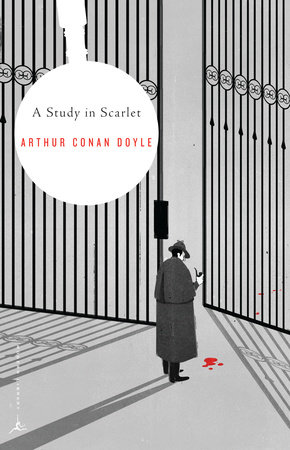 A Study in Scarlet Reader’s Guide

1. Before Arthur Conan Doyle created Holmes, there were few detective stories for Conan Doyle to use as a sort of template. Do you believe Conan Doyle was basing Holmes on a doctor or medical student instead? Why does Conan Doyle intentionally mention Poe and Gaboriau’s detectives? Is he poking fun at himself or setting himself apart from his competition?

2. Upon meeting Watson, Holmes immediately says “You have been in Afghanistan, I perceive.” Yet, Holmes does not indulge Watson with an explanation of his deduction until later. Why did Conan Doyle wait to insert the explanation until later in the book? Does it help or hurt the book?

3. What does Part II, “The Country of the Saints,” tell us about Conan Doyle’s view of religion? Do you believe Conan Doyle believed in the occult or spiritualism? If so, then how do you reconcile the fact he created a character who’s sole motivation is reason and science?

4. Do you like the American flashback? Why do you think Conan Doyle used this scene in the book knowing so little about the Mormon religion and the general geography of the American mid-West?

5. London had recently survived the Jack the Ripper attacks when Conan Doyle wrote this story. Do you think the Holmes stories became so popular as a direct result of the chilling crimes?

Learn More About A Study in Scarlet
print
Back to Top