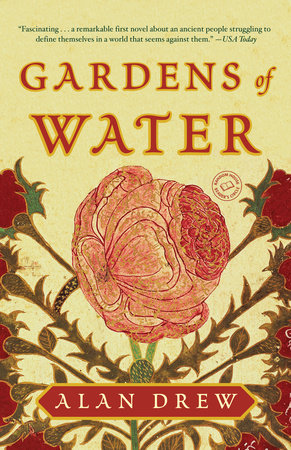 1. Sinan is a character that is full of contrasts. On one hand, he’s indebted to Marcus, and grateful to his help. But on the other hand, he’s resentful of Americans, and particularly Marcus’s Christian values. How does this inner conflict affect his judgment? Do you think he should have acted differently with regards to Dylan and Irem’s relationship? Do you think it would have mattered?

2. Dylan’s mother, Sarah dies while saving Ismail from being crushed by the rubble from the earthquake. Do you think Nilufer would have made a similar sacrifice for Dylan?

3. The relationship between Dylan and Irem has been described as star-crossed. In what ways is this true? How is their situation similar to the one in Romeo and Juliet? Do you think there was another way their story could have ended?

4. The idea of honor plays a large role in the book. Dicuss the differing standards of honor in men and women, Muslims and Kurds, locals and foreigners.

5. In what ways do Sinan and Marcus represent the larger issues of East vs. West?

6. Music plays a large role in Dylan and Irem’s relationship. Why do you think Drew chose Radiohead to be their favorite? Why do you think Irem identified so powerfully with the lyrics? Do you think music is the only thing universal enough to truly connect such different people?

7. In some ways, Gardens of Water could be seen as a commentary on the way Americans are often quick to come to the rescue in foreign countries, only to further complicate the situation. Do you think the story would have been different if Dylan and Marcus had been from a different country?

8. At one point in the book, Marcus says to Sinan: “Our children are not ours. That’s our mistake. We think they are. It seems so for a while—a few brief years—but they aren’t. They never were.” Do you think this is true? How does this opinion influence the different ways in which Marcus and Sinan view their children?

9. The story has an almost claustrophobic feeling to it at times, as the world literally crumbles around the characters. Describe the ways in which the different characters feel trapped, and how this affects their actions.

10. What do you think defines a happy life? How do the characters’ perceptions of this differ from one another?

11. There’s a big contrast between Irem’s family duties and her own interests and passions. Discuss the ways in which the story might have been different if it were about a Kurdish boy and an American girl, rather than the other way around?

Paris Was the Place
Susan Conley