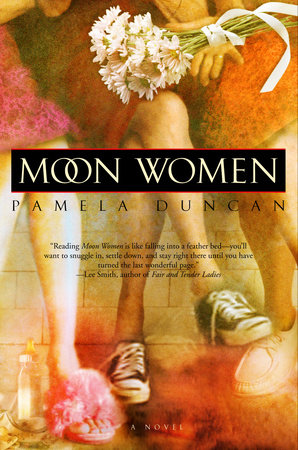 The questions, discussion topics, and author biography that follow are intended to enhance your group’s reading of Pamela Duncan’s debut novel, Moon Women. We hope they will enrich your understanding and enjoyment of this wise, funny and emotionally engaging novel.

With the grace of a natural storyteller, debut novelist Pamela Duncan crafts a mesmerizing tale of family and love, revelation and forgiveness. Beautifully wrought, deeply affecting, Moon Women is a resounding portrait of three generations of remarkable women, separated by a secret only one of them can tell.

In the lush North Carolina foothills, the Moon women have put down roots: matriarch Marvelle Moon, who’s starting to lose her grip on the world after more than eighty years of life; her middle-aged daughters, Ruth Ann and Cassandra: and Ruth Ann’s nineteen- year-old daughter, Ashley, fresh out of rehab, unmarried, and three months pregnant. Each of the Moon women must come to terms with her own flaws and needs–and each must learn to accept that the bonds that hold them together cannot be broken by conflict, by hardship, by tragedy–or by any man.

Fierce and tender, harrowing and heartbreaking, Moon Women resonates with emotional power, holding us captive under its beguiling spell.

1. Moon is a fairly common name in the North Carolina hills where the book is set. Nonetheless, do you think Pamela Duncan’s choice of the name for her characters has other significance? If so, what is there about the behavior and personalities of Marvelle, Ruth Ann, Cassandra and Ashley that are associated with their name?

2. At the center of the book are the female characters. The men in the story orbit around the women. Do the Moon women seem to follow a pattern in their choices of men: Jesse, A.J., Keith, and Lance?

3. We see both Marvelle and Ruth Ann as wife, sister, mother and grandmother. How are the two women similar or different in these relationships? If Ruth Ann relates to her family in ways that are different from Marvelle’s, do you think it’s a conscious decision? What, if anything, do you think she has learned from her mother?

4. By the end of the book, each one of the Moon women has changed. Whether she’s gained insight, made peace with the past, made peace with other members of her family, found the resolve to pursue a dream, each has been transformed. What are the ways in which the four main female characters change over the course of the story?

Pamela Duncan was born in Asheville in 1961 and raised in Black Mountain, Swannanoa and Shelby, North Carolina. She holds a B.A. in journalism from the University of North Carolina at Chapel Hill and a M.A. in English/creative writing from North Carolina State University in Raleigh. She lives in Graham, North Carolina, where her good neighbors watch over her, and is at work on a second novel.
Learn More About Moon Women
print

The House of Memories

More Than You Know

The Secret Lives of the Kudzu Debutantes

No One You Know

Daybreak
Back to Top