The People of Sparks Teacher’s Guide 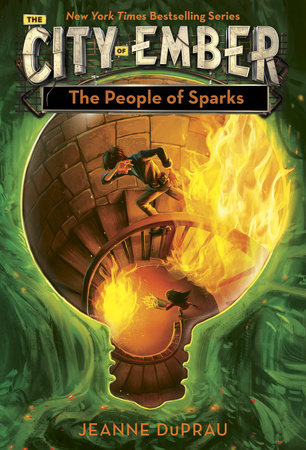 The People of Sparks Teacher’s Guide

The City of Ember

In the underground city of Ember, young Lina and Doon struggle with clues in order to reveal both the history of their city and a way to save the population before their source of light dwindles away to nothing.

Jeanne DuPrau presents a colorless society with a bleak future in The City of Ember. The citizens of Ember live underground where they face daily blackouts, food shortages, and corrupt politicians. With the source of light waning, two young citizens take it upon themselves to unlock the secret to Ember’s mysterious past. Lina Mayfleet and Doon Harrow navigate this post-apocalyptic world in an attempt to decode a cryptic message that may save them all.

The People of Sparks

Followed by fellow Emberites, Lina and Doon emerge from the underground city and are taken in by the first town they encounter–but the additional population puts a strain on the town’s resources, inciting conflict.

Having escaped from the underground world of Ember, Lina Mayfleet and Doon Harrow emerge into the post-disaster village of Sparks. The world of Sparks stands in stark contrast to life in Ember. Sparks glitters with its brilliant light, radiant color, and seemingly abundant resources. As the strain of adding new members to its community begins to take its toll, the people of Sparks resort to survival instincts in an effort to conserve resources. Conflicts emerge as leaders bicker and friendships begin to wane. It takes the courage and leadership of the novel’s young characters to unify the village as they attempt to create a harmonious world.

“What could be more interesting than thinking of mysterious happenings, finding the answers to intriguing questions, and making up new worlds?”–Jeanne DuPrau

Jeanne DuPrau writes for several hours each day and finds inspiration in a quote from Thomas Mann that says, “A writer is someone for whom writing is harder than it is for other people.” This quote guides. DuPrau’s writing, which she often finds to be a challenging task. DuPrau knew she wanted to be a writer at a young age and has tried related careers in teaching, technical writing, and editing. She has written three novels, six books of nonfiction, and with essays and stories. She lives in California where she loves to garden.

Check out the Author Spotlight http://www.randomhouse.com/teachers/authors/results.pperl?authorid=7639
on Jeannie DuPrau
or visit the author’s official site!
http://www.jeanneduprau.com/

The City of Ember Pre-Reading Activity:
Mock Assignment Day–Explain that today is “Assignment Day” and students will get a job placement that will determine their future within the community. Distribute mock job assignments to students and give a talk about service to one’s community. Ask students how they feel about being assigned to a profession. Ask them to speculate on what kind of world they are going to read about, where people are assigned jobs to work as messengers, laborers, electrician’s helpers, and supply clerks.

The People of Sparks Pre-Reading Activity
What Is Community?–Ask students to write an essay about community using the following writing prompt: What is the role of a community? Is the community responsible for taking care of every citizen? Ask students to share their writing responses and discuss how they would react if they were asked to give up vital resources for strangers being added to their community. Consider role-playing the idea of “survival of the fittest” to demonstrate what happens when a community’s resources are strained, and individuals begin to rely on survival instincts.

Family–The main characters of both novels have nontraditional family structures. Discuss with students how the main characters acclimate to their unconventional families in the towns of Ember and Sparks. How do their family relationships change from one book to the next? How does the absence of a mother affect both Doon and Lina? Both Doon and Lina are very responsible young people. How are their responsible dispositions related to their family roles?

The Effects of War–Both novels are set in a post apocalyptic world. Ember is a last refuge for the human race and Sparks is a post-disaster society starting over. Ask students to identify the lasting effects of war on both societies. What is the author’s message to readers? Ask students to imagine a world where technology and abundant resources no longer exist. How would their lives be altered?

Greed–How does greed escalate to conflict? Ask students to trace incidents of greed by both townspeople and politicians as the characters progress from one novel to the next. Create a timeline that illustrates how townspeople allowed fear and greed to lead them into battle. What is the ultimate message about greed in both novels? What is the message about humankind and war? What is the author trying to say about corruption and power? Are the events of these novels a realistic reflection of human nature?

Community Leadership–In small groups, ask students to discuss the role of community leadership in both novels and whether the leaders acted as good role models. Which characters provided true leadership for the towns? When times were tough, how did the leaders of Ember and Sparks provide for the citizens fairly?

Art–Lina dreams of a world full of color and wonders what it might look like. She uses drawing as a way to express her dreams about faraway cities and unknown regions. She says that pictures can capture an idea or a place in ways language cannot. Ask students to sketch a place they have often dreamed about, like Lina does, and carefully select colors that reflect the mood and tone of the dream. Request that students accompany their artwork with a one-page explanatory essay.

Science–Both novels hinge on electricity, whether it’s a waning light source in The City of Ember or the need to reinvent electricity in The People of Sparks. Using the internet resources in this guide, have students research the fundamentals of electricity. How does it work? Who discovered it? What are the key scientific principles behind it? As an extension, encourage students to explore the Watt’s on Your Mind Web site http://www.wattsnew.com/wattsnew3/castlegate/castlegate.html to learn about wasting electricity.

The idea of growing food and nurturing plants from seeds is paramount in both books. Have students grow food from seeds and research the science behind it, like photosynthesis and the life cycle of a plant. Helpful suggestions for lesson plans can be found in these Web sites:
http://www.nyu.edu/projects/mstep/lessons/howplants.html
http://www.kidsregen.org/educators/educators2.php?section=eduNga&ID=3#evaluating
http://www.sciencenetlinks.com/lessons.cfm?DocID=376

Social Studies & Geography–When the citizens of Ember escape their dark society for a more promising land, they became refugees. Ask students to define the word refugee and research the global refugee crisis. Provide your students with a brief overview of the top 10 locations on the planet with the highest population of refugees, then ask them to each choose one, and give a three page overview of that location’s current refugee situation as well as a brief history of its cause.

Ask students to use a map to pinpoint the 10 areas of the world with the most refugees: Afghanistan, Angola, Burma, Burundi, Congo-Kinshasa, Eritrea, Iraq, the Palestinian territories, Somalia, and Sudan. Have students consider why refugees flee their homelands and why some countries deny refugees access into their territories. This assignment is suitable for older grades.

Economics–The principles of supply and demand dictate what resources are available in the towns of Ember and Sparks. As Lina says in The City of Ember, “You can’t divide a can of applesauce evenly among all the people in the city” (p. 153). Teach students about the concept of supply and demand and ask them to make a list of all the items in the novels that are in demand. Then ask students to think about the creative ways in which the novel’s characters supply these items.

Music–The townspeople of Ember have a “Song of the City” that describes the town and its people. Ask students to write a song, the lyrics of which reflect the spirit and the mission of their community and describe the kind of people who live there. Encourage students to use melodies that reflect the tone of the written descriptions.

Vocabulary / Use of Language

The language in The City of Ember is descriptive and thought provoking. Students should define the following words by using the context of the novel: resonant (p. 29), enmeshed (p. 55), moldering (p. 57), pungent (p. 59), and chortled (p.92).

The language in The People of Sparks is equally as challenging. Words for study include: tasseled (p.25), flummoxed (p.67), and thermodynamics (p. 110). To deepen vocabulary understanding, challenge students to use the words in a descriptive paragraph about an event or character from one of the novels.

Learn More About The People of Sparks
pdf

The Barren Grounds
David A. Robertson

Minecraft Dungeons: The Rise of the Arch-Illager
Matt Forbeck

His Dark Materials: Once Upon a Time in the North
Philip Pullman

The Warden and the Wolf King
Andrew Peterson

In a Glass Grimmly
Adam Gidwitz

Minecraft: The Shipwreck
C. B. Lee

Dragons in a Bag
Zetta Elliott

The Indian in the Cupboard
Lynne Reid Banks

Things Not Seen
Andrew Clements
Back to Top