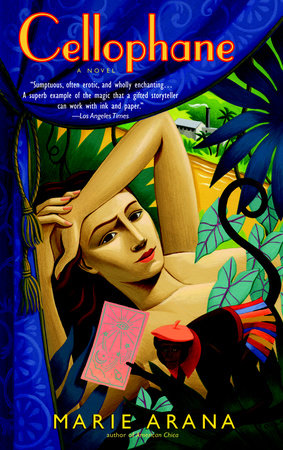 When her memoir, American Chica, was released, Marie Arana garnered rave reviews that compared her to literary giants ranging from Isabel Allende to John Cheever to Joseph Conrad; the book also became a National Book Award finalist. Cellophane marks Arana’s fiction debut, and the result is no less spectacular. Both a sizzling family saga and the riotously entertaining story of a commercial obsession gone awry, Cellophane transports you to a world where nothing is what it seems, and the ordinary always succumbs to the extraordinary.

At the heart of Cellophane is patriarch Don Victor Sobrevilla Paniagua, a lovable, eccentric engineer who always dreamed of founding a paper factory in the most improbable of locales—an uncharted pocket of the Peruvian rain forest. Yet his dream is fulfilled, and over the years he builds a comfortable life for himself and his quirky family, always mindful of ominous predictions he received as a boy. When he discovers the formula for cellophane, this diaphanous product ushers in a new era of plagues for Don Victor: a hilarious plague of truth, an erotically charged plague of desire, and a sinister plague of revolution. Love lives are toppled, new romances are ignited, and Don Victor is finally forced to weigh the price of pursuing a dream to its final conclusion.

The questions, discussion topics, and author biography that follow are intended to enhance your reading of Marie Arana’s Cellophane. We hope they will enrich your experience of this stunning, vibrant novel.

1. Cellophane opens with images of Don Victor’s boyhood, including his fascination with Swedish ball bearings and Señor Urrutia’s perpetual-motion machine. What were your first impressions of Don Victor? What was the significance of his early fascinations?

2. When Don Victor travels to the interior in his early twenties, he has his first experience with the small-statured Serrano Indians. What is his attitude toward South America’s indigenous populations? Whom does he trust more: his curandero or his priest?

3. What was the effect of knowing the details about Doña Mariana’s experiences in labor? Do her three children have many traits in common?

4. Don Victor uses equipment made available after the suicide of William Randolph Meiggs to establish his paper factory downriver in Floralinda. How do Don Victor and the other Peruvians in the novel seem to feel about American investors?

5. What is supernatural about Basadre’s cough? What predictions did you derive from the encounter between Miguelito and the terrier? Were the ingenious tin-cup braces a success?

6. Pedro’s migrant tribe avoids him, considering him to be tainted by the "termites." Do many of the novel’s characters gain acceptance in more than one culture, or is segregation required? In terms of class, who are the novel’s true power brokers?

7. Near the end of Chapter Four, the initial, passionate months of Belén and Ignacio’s marriage are described. Marie Arana tells us that, reading Zola’s pro-labor novel Germinal, Belén would "thank God that her legs were wrapped around a factory worker." What other literary references enhance the storytelling in Cellophane? What does Belén’s taste in literature indicate about her personality?

8. Discuss the remarkable features of Tía Esther’s affair with Lars, revealed in Chapter Five. What common threads run through the tales of lovers in Cellophane?

9. How would you have reacted to Padre Bernardo’s revelation? If you were to engage in the litany of truth telling performed by Jaime in chapter six, what sorts of realities might be revealed?

10. Louis Miller wonders why Floralinda isn’t on any map. Locate a detailed map of Peru and explore the remote region corresponding to Floralinda, noting its distance from Trujillo and Lima. What does a map exercise reveal about Don Victor in his quest? In what ways does landscape almost become a character itself in the novel?

11. How does Don Victor cope with the losses in his life, particularly the death of Chína, and the death of his mother at the hands of the military? Is there any similarity between the way he interacts with his brother (Don Alejandro, who still lives in the ancestral home and ships away his castoffs) and the way his children interact with one another?

12. In Chapter Nine, as Don Victor concludes his conversation with Padre Bernardo, he says, "I wouldn’t have known how to tell Yorumbo what sin means in the context of his culture. Simple, ordinary sin." Is sin universal, or is it defined by culture?

13. What accounts for Don Victor’s love affair with paper? What attributes of cellophane–transparent, shimmering, fragile, protective–make it an excellent metaphor for his life? In what subtle ways was he indeed a shape changer?

14. Chapter Ten marks the arrival of General Lopez from President Odria’s army. Odria’s rise to power through a military coup is based on fact. What other historical parallels exist between Peru’s political state and the novel? What elements of surrealism and reality form the underpinnings of this novel?

15. What is Marcela’s ultimate predicament? In what ways does she bring comic relief to the novel? Is she typical of most of the women in Don Victor’s life?

16. Discuss the clever communication and translation jokes raised in the novel, and the way they shape the plot.

17. In Chapter Eleven, Tía Esther tells the story of her parents, Homero Paniagua and Catalina Wong. What transforming powers does this story have? How would you characterize the power and significance of storytelling in general throughout Cellophane?

18. Is there a Tía Esther in your family, an unlikely heroine who repeatedly saves the day?

19. What do you predict for Don Victor’s descendants, Graciela, Belén, and Jaime? Will Elsa and the General have a satisfying relationship?

20. Reread Victor’s fortune, which forms the novel’s closing image and whose full text appears in Chapter One. Did it capture the truth, or did his misplaced belief in the fortune lead to his downfall? How would its predictions have applied to your life?

The Astonishing Life of Octavian Nothing, Traitor to the Nation, Volume II
M.T. Anderson

Half the Kingdom
Lore Segal

Ask for a Convertible
Danit Brown

The Way It Works
Eddie Goldenberg

What I Did Wrong
John Weir

Why We Hate Us
Dick Meyer

Search for a Method
Jean-Paul Sartre

Juliet Was a Surprise
Bill Gaston

Ready for a Brand New Beat
Mark Kurlansky
Back to Top