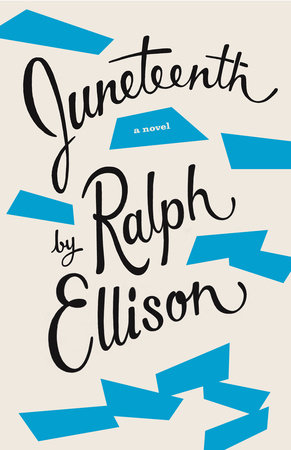 The questions, topics, and author biography that follow are designed to enhance your group’s reading and discussion of Ralph Ellison’s Juneteenth, the narrative core of the work-in-progress that Ellison planned to follow Invisible Man, the book which propelled him to fame and prestige when it was published in 1952.

The story opens in the 1950s, with the first stirrings of the Civil Rights Movement. Adam Sunraider, a.k.a. Bliss, a white racist senator from New England, is gunned down by a young black man while making a speech on the Senate floor. Elderly members of a black church group from the South, led by the Reverend Alonzo Hickman, have come to Washington to warn Sunraider of the assassination plot, but they are turned away repeatedly by the senator’s secretary. Much to the surprise of observers, the mortally wounded senator asks that the black minister be brought to his bedside. From their conversation and the flashbacks and memories of both men, we learn that Sunraider is the child of a white woman who had accused Hickman’s brother of raping her. Hickman’s brother died in a brutal lynching, and the woman came to Hickman shortly thereafter to seek his help in giving birth to her child, whom she offered to Hickman in reparation for his brother’s death. Hickman became, effectively, the father of the child, and raised him to be an itinerant evangelical preacher, a brilliant speaker, and a performer at revival meetings throughout the South, until Bliss ran away to seek the mother he had never known. The next time he sees Hickman, it is in his hospital room.

Like Ellison’s Invisible Man, Juneteenth is a brilliant exploration of the American soul in all its heroic idealism, its moral ambivalence, and its still-troubled sense of racial identity. It draws on the full richness of America’s black cultural heritage, from the dazzling range of vernacular sources in the novel’s language to the way its structure echoes the call-and-response pattern of the black church and the riffs and bass lines of jazz. It offers jubilant proof that–as Ellison once wrote–whatever else it means to be a true American, it means to be "somehow black."

1. The first chapter, in which Hickman and his followers come to Washington, employs a fairly clear and traditional narrative style. Chapter Two, on the other hand, is experimental, even surreal, in its stream-of-consciousness presentation of events. It places the reader in the midst of things and causes a certain sense of bewilderment which is only laid to rest upon reading through the novel. What is the effect, as you read, of Ellison’s presentation of his characters’ shifting thoughts, and the movements from past to present in the consciousness of his characters?

2. During his speech in the Senate, we learn that the significance of Adam Sunraider’s name is in the beliefs he holds about identity and its fluidity. He says, "Ours is the freedom and obligation to be ever the fearless creators of ourselves, the reconstructors of the world. We were created to be Adamic definers, namers and shapers of yet undiscovered secrets of the universe" [p. 23]! How is this idea particularly American? How are Sunraider’s ideas about identity different from those held by Reverend Hickman?

3. What does Sunraider mean by saying that the main substance of American consumption consists of ideals [p. 16]? Can ideals be consumed, or are they supposed to be stable, unshifting? How does the seeming idealism of the senator’s speech resound with his abrupt shift to joking about Cadillacs in Harlem [p. 23]? Are the ironies of this speech easier to grasp once the reader knows more about Sunraider’s history?

4. What is the significance of Juneteenth, the day in 1865 on which Texas slaves found out—very belatedly—that they were free? Why does what happens on the commemoration of Juneteenth have such a shattering effect upon Bliss’s life? Why does Ellison want to draw a parallel between that date in the history of American slavery, and this fateful day for Hickman and Bliss?

5. Why are the movie industry and Bliss’s fascination with movie-making so central to the story? Is there a meaning in the sequence of Bliss’s progression from itinerant revival preacher to movie-maker to politician? What is Ellison saying about the role of illusion in American culture and belief? Hickman says, as he prepares to take Bliss to the picture show for the first time, "The preacher’s job, his main job, Bliss, is to help folks find themselves and to keep reminding them to remember who they are" [p. 223]. What is the role of illusion, or trickery, in Daddy Hickman’s ministry? Is there a contradiction here?

6. Why does Ellison deliberately contrast the hard-won integrity and deep self-knowledge of Hickman with the bewilderment, the desperate grasping at various identities, of Bliss/Sunraider? Is black identity necessarily more clear-cut than white identity?

7. Ellison has written, "Despite his racial difference and social status, something indisputably American about Negroes not only raised doubts about the white man’s value system but aroused the troubling suspicion that whatever else the true American is, he is also somehow black." How does this statement apply to Juneteenth? What, for Ellison, is the role that black culture plays in the lives of white Americans? What is its role in American culture as a whole?

8. What do you think of Bliss’s role in Hickman’s show as the son who rises from the dead? Is this exploitative on Hickman’s part, given that Bliss is so clearly afraid of being imprisoned in the coffin for this theatrical resurrection? Do you feel sympathetic toward Bliss in his need to break free of Daddy Hickman’s control over his life?

9. What is the relationship between Sunraider’s public references to black Americans as "those alien-minded groups who refuse the sacred obligations of becoming true Americans…these internal enemies" and one of his private thoughts that appears on the same page—"How here I reject them and out of my rejection rule them. They create their own darkness and in their embarrassment left all to chance my changed opportunity" [pp. 60-61]. How important is self-hatred in his transformation? We don’t know, finally, whether Sunraider is white or of mixed race. Does it matter? Why should he desire so strongly to reject the people who raised him?

10. What is the relationship between preaching and music (gospel, jazz, and blues) in Juneteenth, particularly in Hickman’s description of the Juneteenth celebration in Chapter Seven? How do these musical rhythms affect Ellison’s prose style?

12. With his adoption by Hickman, Bliss effectively becomes the child of an entire community, and Hickman speaks of the adoption in communal terms. "We took the child and tried to seek the end of the old brutal dispensation in the hope that a little gifted child would speak for our condition from inside the only acceptable mask. That he would embody our spirit in the councils of our enemies—but oh! what a foolish miscalculation" [p. 271]! What is the moral principle that Hickman and his followers have attempted to live by? Why are they faithful to Sunraider to the end?

13. What does Hickman mean when he says, "Little Bliss was father to the man and the man was also me" [p. 320]? How is Hickman, a gambler-musician turned preacher, changed by the presence of Bliss in his life? What happens during their long conversation in the hospital? Is there forgiveness and reconciliation between them?

14. The final chapter is a hallucinatory stream of memories and visions in the senator’s mind. Filled with danger and escape, it seems to recapitulate in dreamlike form many of the scenes of Bliss’s childhood—among them, the figure of his red-haired mother and the wealthy world of riding habits, ball gowns, and shooting jackets [see Chapter Ten], and a little boy in red pantaloons who might be an image of himself and who also seems to merge with the little clown in blackface on page 249. How does the final chapter change your perspective on Sunraider and his betrayal of Hickman? Is there a sense of justice here, since Sunraider is threatened with violence from blacks and whites alike?

15. How is your response to Juneteenth affected by the afterword, in which Ellison’s literary executor, John Callahan, explains that he extracted the narrative he says "best stands alone as a single, self-contained volume" from over 2,000 pages of typescript that Ellison had worked on for over 40 years?

16. For discussion of Juneteenth and Invisible Man

1. Ellison’s novels are part of an ongoing and necessary dialogue in American literature that, like the work of such writers as Mark Twain and William Faulkner, examines the issue of race—and more importantly, the mixing of races—as a haunting and potentially liberating aspect of American history. If you’ve read works of Faulkner and Twain, how do the works of Ellison take up and modify their themes and concerns? How is Adam Sunraider related thematically to the protagonist of Invisible Man?

17. 2. Both Invisible Man and Juneteenth are centered upon a restless and driven protagonist; one is a black man, and one is, or at least passes for, white. In Invisible Man, many forces conspire to "keep this nigger-boy running." What, in Juneteenth, provokes Bliss/Sunraider’s flight? Can Juneteenth be seen as a continuation of the earlier novel? How do the two works differ?

18. 3. The "battle royal" scene and Tod Clifton’s Sambo dolls are among many details in Invisible Man that emphasize the degradation of black people at the hands of whites. Does the dignity of Hickman in Juneteenth, even in the face of humiliation, seem to make Juneteenth a more hopeful, less satirical book than its predecessor?

Ralph Ellison was born in Okalahoma and trained as a musician at Tuskegee Institute from 1933 to 1936, at which time a visit to New York and a meeting with Richard Wright led to his first attempts at fiction. Invisible Man won the National Book Award and the Russwurm Award. Appointed to the Academy of American Arts and Letters in 1964, Ellison taught at many colleges including Bard College, the University of Chicago, and New York University where he was Albert Schweitzer Professor of Humanities from 1970 through 1980. Ralph Ellison died in 1994.
Learn More About Juneteenth
print

The Sound and the Fury
William Faulkner

Before You Know Kindness
Chris Bohjalian

The Sportswriter
Richard Ford
Back to Top