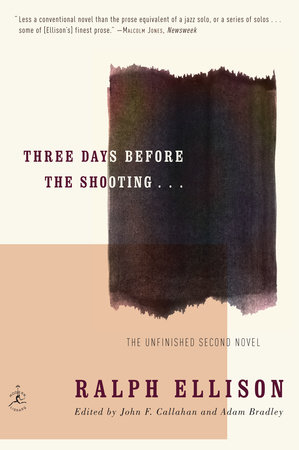 This discussion guide will assist readers in exploring Juneteenth. We hope that it will help create bonds not only between the book and the reader, but also among the members of the group. In your support of this book, please feel free to copy and distribute this guide to best facilitate your program. Thank you.

In the 1950s in Washington D.C., a race-baiting senator has just been shot on the Senate floor by a young black man. On his deathbed, the senator calls out for a mysterious stranger, an elderly black minister from Oklahoma, who comes to his side. Their remarkable conversation and the memories it sparks take them back to the deeply buried secrets in their past. Juneteenth showcases the unsurpassed lyrical gifts of Ellison’s autobiographical reckoning of his own life journey.

1. Why the title, Juneteenth? What does the word as well as the occasion Juneteenth come to mean in the novel?

2. Ellison once said that the true American, whatever the particulars of his or her genetic or cultural heritage, is also “somehow black.” Why do you think Ellison never reveals Bliss/Sunraider’s father’s race? If Sunraider lives in the world as a white man, what would it mean to say that he was black, and why would it matter?

3. Do the actions and meditations of the novel answer the “three fatal questions” posed (p. 19) by the race-baiting Senator Sunraider in his pre-assasination speech: “How can the many be as one? How can the future deny the past? And how can the light deny the dark?”

4. Why, after he is mortally wounded, does the Senator call Hickman, and only Hickman, to his hospital bedside? Why do you think Ellison named Hickman Hickman? And why are his initials A.Z.? Do you feel it is significant that Hickman is a jazz musician before he becomes a minister?

5. Hickman names the baby he midwifes into this world Bliss “because they say that’s what ignorance is.” Does the name come back to haunt Bliss/Sunraider, and also Hickman? Why do you think Bliss later chooses Adam Sunraider for his new name?

6. Why does the sister call Lincoln “Father Abraham” and what is the connection between Lincoln, Bliss, and Hickman? Why is Lincoln so important to Hickman?

7. What connection, if any, is there between the images and performances of religious services, the movies, and political rituals? What is the result of Ellison’s using the African-American culture and vernacular for the sermons, church scenes, and jazz in the novel?

8. When Ellison accepted the National Book Award for Invisible Man, he wrote that “I was to dream of a prose which was flexible, and swift as American change is swift, confronting the inequalities and brutalities of our society forthrightly, yet thrusting forth its image of hope, human fraternity, and individual self-realization.” Does his prose in Juneteenth realize this dream?

Ralph Ellison was born in Oklahoma City in 1914. He was the author of the novel Invisible Man, a winner of the National Book Award and one of the most important and influential American novels of the twentieth century, as well as numerous essays and short stores. He died in New York City in 1994.


From the Hardcover edition.
Learn More About Three Days Before the Shooting . . .
print

Flags in the Dust
William Faulkner

Breakfast at Tiffany’s & Other Voices, Other Rooms
Truman Capote