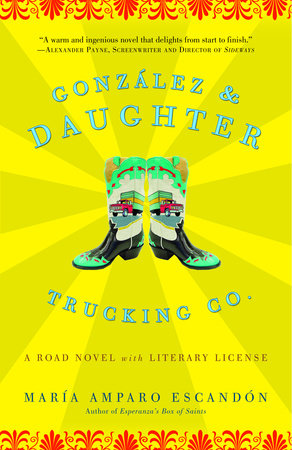 In the Mexicali Penal Institution for Women, the inmates may not know when or how they’ll eventually reenter society, but the rules of the prison are understood by all: money buys privileges; no favor is free; and every inmate’s crime is known by all. Every inmate, that is, except Libertad, who can’t bring herself to admit to her fellow prisoners—even her best friend Maciza—the reason for her incarceration. But Maciza insists that the story will come out with time, and in a way that is not quite understood by all in the prison, it does. Behind the guise of fiction, Libertad’s story is slowly revealed in the Library Club she creates for her illiterate prison-mates, as Libertad
flips through book after book pretending to read a serial work of fiction that is all too true. As her story unfolds, we learn of a fugitive professor, a passionate marriage, small miracles and mystical deeds, and a girl who learns everything on the road. Meanwhile, the real world of the prison goes on, as the women buy and sell small luxuries and negotiate prison politics until, slowly, they are rehabilitated and become free to go—though not necessarily according to their sentences. In truth, it is the warden who decides when the women may go, though the prisoners’ own motivation plays a significant role. For Libertad, it takes the telling of her story to be ready for her own release, and week after week she unveils pieces of it to her eager audience as she marks her days with a journal of the clouds, and echoes of her life on the road rumble on as if to confirm her tale. Against the backdrop of imprisonment, the story traces the path toward tragedy, and the beginning of new friendship and forgiveness.

1. Warden Guzmán takes advantage of her position for her own gain and is sometimes motivated by her desire for money rather than her strict responsibilities as a warden,but she also displays an understanding of her prisoners that leads her to recognize Chapopota’s rehabilitation and at times, also kindness. How much do you think the warden cares about the women under her watch? Is her system, such as it is, effective in promoting the inmates’ welfare?

2. When Libertad is greeted at the prison gates by her father and Martin, the inmates remark that Martin is not handsome enough to be the man in the story—revealing that Libertad’s account of her past in Library Club is perhaps not the strictest truth. Are there any other parts of her story you would doubt? Is there anything you suspect she’s left out?

3. What portion of the Library Club do you think believes that Libertad’s story is a work of fiction? Are those that believe she is truly reading from books written by others gullible to believe this, or is this a willful delusion?

4. The book begins with Libertad’s wish that she could bring back all the people she killed. What was your initial impression of her crime? How did our suspicions evolve over the course of the book?

5. Was Libertad’s arranging to have her father beaten an act of kindness, or was there some malice involved? Do you think she forgave him for his mistakes?

8. Do you think Maciza will be a good mother to her son, Pollito? Why or why not?

9. When the Vietnamese prisoners ask to stay in prison rather than go free, the warden is unsurprised. In fact, this is not the first time in the course of the book that a woman has made such a request. Why would they want to remain incarcerated? What do they—and what do you—find appealing about the prison?

10. When Libertad saw high heels in Martin’s tidied-up house, what do you think the real story was? Was there another woman? Is that, as Libertad explains it, only natural given her own long absence and silence, or is there a more innocuous explanation?

12. What makes Libertad’s story so compelling for her audience?

A Hologram for the King

Going After Cacciato
Back to Top