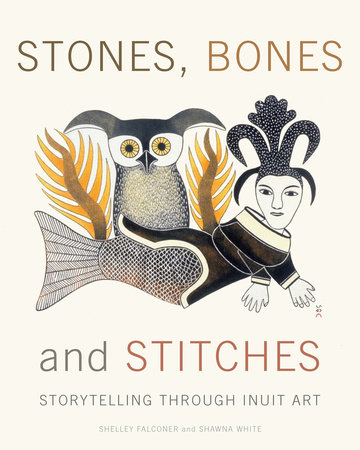 Stones, Bones and Stitches: Storytelling through Inuit Art weaves a tapestry of fascinating Canadian stories by focusing on several important works of art from the McMichael Canadian Art Collection in
Kleinburg, Ontario. The evolving character of the North is explored through the lens of some of Canada’s most significant Inuit artists. Included are eight different works from sculpture and prints to fabric art. They are
highlighted and explained by introductions to the artists, materials, geography, legends and stories. Readers gain insight into the artist’s lives, communities, and working conditions through photographs and maps,
brief histories of the region, and a collection of interesting facts such as these:
• Cape Dorset boasts the largest number of artists per capita in Canada–22.7%, almost one-quarter of the labor force and thirty times the national average!
• the word Eskimo is a derogatory term meaning “eaters of raw flesh.”
• some Inuit artists quarry stone for their sculptures in the winter but have to wait until the summer to bring it back to their workshops.
• an igloo uses the same design principles found in the great cathedrals of Europe.
• according to legends, the stone figures called Inukshuks protect travelers and point them to the safest pathway.
• Europeans first sailed through the Arctic in search of a short cut to the Far East.
• the Inuit have been carving for more than 4,000 years.

SHELLEY FALCONER is director of exhibitions and programs and senior curator for the McMichael Canadian Art Collection and a member of the University of Toronto’s adjunct faculty in Museum Studies. Falconer has contributed, as a writer and editor, to many exhibitions and new media publications, and her recent projects include the extensive reinstallation of the McMichael’s permanent collection galleries.

SHAWNA WHITE is an assistant curator for the McMichael Canadian Art Collection. She has worked as a curator, educator, arts administrator, consultant, and Canadian art specialist. White’s recent curatorial projects include the exhibition and publication for The Arctic Image as well as the extensive reinstallation of the McMichael’s permanent collection galleries.

VISUAL ARTS
Many Inuit artists draw on their personal experience and culture for inspiration in creating works of art. Ask students to choose an experience from their own lives and translate it into a visual form such as a drawing or sculpture.

ABORIGINAL PEOPLES
Explore Inuit culture in Stones, Bones and Stitches through engaging discussions about art, food, clothing, shelter, beliefs, and values. How long have the Inuit been in Canada? What might be part of the “old ways” of the Inuit? When and why did the culture change?

HISTORY
The construction of the D.E.W. (Distant Early Warning) Line in the Arctic was begun in 1953 and completed in 1957. During this time the Canadian government began moving Inuit into permanent settlements. Have students research the construction of the D.E.W. Line and the presence of the American military in the Arctic. What was the impact on both the people and the environment of the north?

SOCIAL STUDIES
What was the Canadian government’s purpose in sending Inuit children like David Ruben Piqtoukun away to residential schools? What are the pros and cons of such a system?

1. What materials are used by Inuit artists to create works of art? How did these artists acquire their materials?
2. Ask students to imagine that they are being sent far away for treatment of a disease. What would they take with them? What would they miss the most? What coping strategies could they use?

3. Oviloooo Tunnillie’s work Woman Quarrying Stone shows us that Inuit art is very good at communicating
strong emotions. Ask students what they think the work is communicating. Why does this work affect us so deeply?

4. Ask students how they think modern technology and global warming are affecting the traditional life of the
Inuit. What are the positive and negative aspects of such changes?

1. The Arctic is a vast region covering thousands of square kilometers. Using a map of the region have your students identify the Inuit communities featured in this book. Refer to the artists’ biographies in the book and have the students list the following information for each artist:
• Where the artist gets his/her ideas.
• One aspect of his/her life that they think is interesting.
• One question they would like to ask the artist.
• Where they would get ideas for their own artwork.

2. The most common image we have of the Arctic is a vast, frozen land. Have students identify animals and vegetation that live in the far north. Arctic birds, polar bears, seals, caribou, sea mammals and animals are often present in Inuit art. Select works from the book and provide written and oral descriptions of these creatures.

3. Legends are often about traditions and beliefs. They are told by family members and passed down from generation to generation. Read and discuss the legends presented in the book to illustrate how Inuit myths tell how humans and other living beings are all connected in the universe. Explain how theses stories and the spirits they describe continue as inspiring and powerful sources for Inuit artists today. Have the students act out or illustrate an Inuit legend.

4. Stones, Bones and Stitches looks at art produced in several different Inuit communities. Look at other examples of artwork from communities such as Qamanittuaq (Baker Lake) and Kinngait (Cape Dorset). How do they differ? In what ways are they similar? What are possible reasons for differences?

5. During the 1950s tuberculosis was a common disease that affected many Inuit men, women, and children. Treatment for the disease required an extended stay in a sanatorium hundreds of miles from home. Ask students to image that they are from a small Inuit community and are being sent south for treatment of a disease. Have them write a journal entry about their feelings when leaving home and another one about arriving at a treatment center in the south.

6. Ask students to study the signatures of the artists and then research the Inuktitut alphabet. When was it developed and by whom? Have students try to create their own signatures using the characters in the alphabet.

Amautik — a specially designed parka worn by Inuit women in the central and eastern Arctic that contains a pouch in the back to hold a baby. The babies were carried in these parkas naked, and layers of grass or moss on the bottom of the pouch acted like a diaper. Children usually traveled by amautik until they reached the age of three.

Eskimo — the commonly used name for cultural groups in Canada’s North until 1977. It is, in fact, a derogatory term, coined by neighboring First Nations groups in competition with them for territory and resources.

Inuit — a term meaning “the people” which Canadian Arctic peoples use to identify themselves. Inuit are the aboriginal inhabitants of the region stretching from the Bering Straight through Greenland. They call themselves different names depending on which region they live in.
Western Canada — Inuvialuit
Eastern Canada — Inuit
Greenland — Kalaallit
Alaska — Yupik and Inupiat

Inukshuk — An Inukshuk (singular) is a stone figure traditionally built by the Inuit as a land marker. Translated into English as “likeness of a person” Inuksuit (plural) were built in many forms for several purposes such as indicating the safest route, as a warning sign for danger, and to point out the location for good hunting or fishing. Inuksuit were also built as memorials to show respect to beloved people. An Inukshuk in the shape of a human is referred to as an Inunguak.

Inuktitut — the language of the Inuit. There are many regional dialects.

Ulu — multi-purpose crescent-shaped knife developed by the Inuit and used by women. The ulu is still widely used today to cut meat, remove the hair from animal skins, and to cut clothing from hides.

Umiak — a large wood-frame boat covered with seal or walrus skin that typically holds thirty or more people. It is powered by paddles or oars and sometimes by a sail.

In Celebration of Nunavut: Inuit Arts (5 volumes)
Life in the Settlements (9 volumes)
Netsilik, (11 volumes)
National Film Board of Canada

Children of the Fox
Kevin Sands

Order of the Night Jay (Book One): The Forest Beckons
Jonathan Schnapp
Back to Top