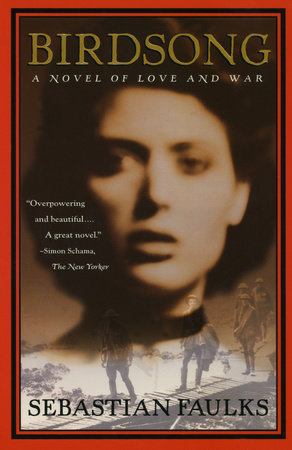 The questions, discussion topics, and author biography that follow are intended to enhance your group’s reading and discussion of Sebastian Faulks’s Birdsong. We hope they will enrich your understanding of this overpowering and harrowing novel, a Tolstoyan epic of love, war, and redemption.

In 1910 a young Englishman, Stephen Wraysford, goes to Picardy, France, to learn the textile business. While there he plunges into a love affair with the young wife of his host, a passion so imperative and consuming that it changes him forever. Several years later, with the outbreak of World War I, he finds himself again in the fields of Picardy, this time as a soldier on the Western Front. A strange, occasionally bitter man, Stephen is possessed of an inexplicable will to survive. He struggles through the hideously bloody battles of the Marne, Verdun, and the Somme (in the last named, thirty thousand British soldiers were killed in the first half hour alone), camps for weeks at a time in the verminous trenches, and hunkers in underground tunnels as he watches many of the companions he has grown to love perish. In spite of everything, Stephen manages to find hope and meaning in the blasted world he inhabits.

Sixty years after war’s end, his granddaughter discovers, and keeps, Stephen’s promise to a dying man. Sebastian Faulks brings the anguish of love and war to vivid life, and leaves the reader’s mind pulsating with images that are graphic and unforgettable.

2. Does Stephen see Isabelle as a captive? Does she see herself the same way? How does Stephen’s perception of Isabelle and her predicament differ from her own self-perception?

3. Why does Isabelle leave Stephen? How does her departure affect his identity as a soldier, the way he approaches the war, and the manner in which he conducts himself during it?

4. What premonitions of war and death does Faulks give us in the 1910 section of the book? Where and when does Stephen have visions of death within the lush beauty of prewar Picardy? Do you feel that these visions are simple premonitions, or is the predisposition to such images a part of Stephen’s character?

5. Where and to what purpose does Faulks use images of birds? Why does Stephen fear birds, and what do birds symbolize for him? What do they seem to mean to the author? How might you explain Stephen’s dream on page 44?

6. While staying with the Azaires, Stephen writes, "I am driven by a greater force than I can resist. I believe that force has its own reason and its own morality even if they may never be clear to me while I am alive" [p. 49]. Where else in the novel does Stephen sense that sort of force, and how does he respond to it?

7. How would you describe the character of Jack Firebrace? How does it change during the course of the war? What "dies" in him when Horrocks hurls his cross away? What do his letters to Margaret reveal about his character, his values, his code of behavior?

8. The soldiers tend to forget very quickly the names and characters of their friends who die. Do you find this shocking? Is such willed oblivion necessary in order to give life to the men’s own delicate instinct for self-preservation?

9. "I think [the men] will do ten times more before it’s finished and I’m eager to know how much. If I didn’t have that curiosity I would walk into enemy lines and let myself be killed. I would blow my own head off with one of these grenades" [p. 145]. Is Stephen’s curiosity ever finally satisfied?

10. Throughout the war, Stephen feels a real hatred for the enemy–see page 156, for example. Do you believe that this hatred is genuine, or that Stephen has persuaded himself of it so as to give meaning and order to his existence? How does the fact that it is German soldiers who ultimately rescue him change his life–and theirs?

11. Stephen is a brooding and enigmatic figure who is repeatedly described as "cold" by the narrator. Is Stephen a cold character? How do the other soldiers see him [on pages 141, 143-44, and 211]? When Gray asks Stephen whether he would give his life for his men, Stephen answers in the negative [p. 159]. Do you think he would give the same answer if he were asked this question during the last year of the war? What keeps him going during the war [pp. 156, 171]? Do you think that the war changes Stephen?

12. In the life of the trenches, Stephen reflects, "There was only violent death or life to choose between; finer distinctions, such as love, preference, or kindness, were redundant" [p. 194]. This is Stephen’s view of events, reading his story. Do you find that the soldiers have really lost their sense of finer distinctions?

13. Haig and Rawlinson typify the World War I staff officers who lost the respect of their men because they didn’t share the danger and squalor of the front line. High commanders on the Western Front usually established their headquarters in châteaux well behind the lines: historian John Keegan has called this phenomenon "château generalship." How did this manner of conducting war affect and form the way the twentieth century has looked at war? How did it change our ideas of military glory and our vision of our military leaders?

14. Stephen and Weir enjoy an unlikely but intense friendship. What is it about Weir’s character that makes Stephen love him more than any of the others? What emotional need does Stephen fill in his turn for Weir? Does Stephen change in any way after Weir’s death?

15. The soldiers "were frightening to the civilians because they had evolved not into killers but into passive beings whose only aim was to endure" [pp. 340-41]. How do civilians, in general, treat and respond to these soldiers? How do you explain the attitude of the clerk in the men’s store where Stephen tries to buy shirts [pp. 342-43]? Do you find the behavior of Weir’s parents extraordinary–or understandable in people far removed from actual battle? Have soldiers from later wars, such as the conflict in Vietnam, reported similar experiences and attitudes?

16. Why do you think that Stephen displays such an overpowering will to survive, in spite of the loneliness of his life and the unhappiness he has undergone? What elements and events of his life have contributed to his instinct for self-preservation?

17. Elizabeth is spurred on in her research by a feeling of the "danger of losing touch with the past" [p. 240]. Does her ignorance of recent history surprise you, or do you find it characteristic of her generation? Do you find that you, and the people around you, are similarly detached from the past?

18. What does Elizabeth, the granddaughter, represent? And her baby? In what ways does history repeat itself in her life?

19. Why has the author set this story about war against the backdrop of a passionate affair? Explore the various parallels drawn between desire and death, love and war, in the novel. In what ways are the love scenes similar to some of the battle scenes? How does the body take on different meanings [pp. 130, 197-98]?

His first novel, A Trick of Light, was published in 1984. By this time he had become a feature writer on the Sunday Telegraph and in 1986 moved to the new national daily paper the Independent as its literary editor. His second novel, The Girl at the Lion d’Or, was published in 1989.

In 1991 he gave up journalism to concentrate on writing. In 1992 his third novel, A Fool’s Alphabet, was published in London (New York: Little, Brown, 1993), and in 1993 he published Birdsong to huge critical acclaim. It has so far sold more than 400,000 copies in Britain. In January 1997 a television and bookshop poll among British readers placed it in their top fifty books of the century. He was named Author of the Year in the British Book Awards of 1995.

He has since published a nonfiction book, The Fatal Englishman: Three Short Lives, which was also a bestseller, and is nearing the end of a new novel. He married in 1989, and he and his wife have three small children. They spent 1996 in France but are now back in London.
Learn More About Birdsong
print

The Maze at Windermere
Gregory Blake Smith
Back to Top