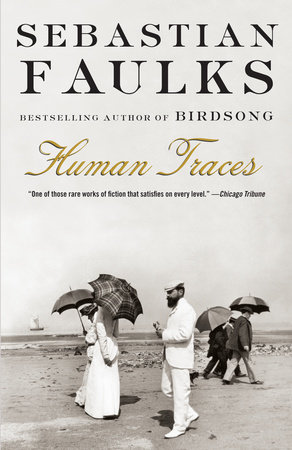 “Epic in scope, yet suffused with intimate emotions. . . . One of those rare works of fiction that satisfies on every level.” —Chicago Tribune

The introduction, discussion questions, and suggestions for further reading that follow are designed to stimulate your group’s discussion of Human Traces by Sebastian Faulks.

Human Traces is the engrossing tale of two men and their quest to discover what it means to be human. Set during the late nineteenth and early twentieth centuries, Faulks’s novel brilliantly captures the drama behind the intellectual and social controversies spurred by Darwin’s theory of evolution and breakthroughs in the study of mental illness.

Jacques Rebière, a Frenchman from an impoverished background, and Thomas Midwinter, a well-to-do Englishman, are young doctors drawn together by their shared interest in the workings of the mind and the causes—and possible cures—of madness. For Jacques, the search for answers has a very personal component: his older brother, Olivier, once his loving mentor and companion, has been confined in an asylum since adolescence. The friendship between the young men is cemented when Jacques marries Thomas’s sister, Sonia. After training in institutions more focused on controlling patients than on understanding their disorders, Jacques and Thomas open a clinic in the mountains of Eastern Europe. Over the years, they develop differing theories and treatments. While Jacques embraces the psychological approach propounded by the founders of psychoanalysis in Vienna, Thomas concentrates on discovering the links between evolution and the emergence of human consciousness. Their disputes threaten their professional partnership, as well as their personal lives and the close-knit community of families and employees at the clinic.

1. Jacques and Thomas are pioneers in the field of psychiatry. How does the state of scientific research in the nineteenth century shape their expectations? Are they overly optimistic about what they can accomplish? What obstacles and limitations do they acknowledge? To what extent is all medical research driven by the belief that we can—and will—uncover the ultimate truth about the workings of the human body and mind?

2. Jacques witnesses the devastation of mental illness as a child, as his brother, Olivier, slips away little by little. Why is he the only member of the family who tries to communicate with Olivier? How does his mother’s death in childbirth affect Jacques’s childhood? What impact does it have on his personality as an adult?

3. What do the reactions of Tante Mathilde, the Curé, and Jacques to Olivier’s violent behavior [pp. 25-31] reveal about people’s beliefs about madness in the nineteenth century? How does the language of each character, as well as the descriptive imagery, reflect and emphasize the notion that, as the Curé says, “All such afflictions are part of the divine plan” [p. 30]?

4. Do the characteristics Thomas displays as a young man (his interest in literature, his restlessness as a student, and his close relationship with his family, for example) contribute to his approach to medicine and to his patients? What is the significance of the voices he hears and accepts without question [p. 45]? In what ways do his experiences at the county lunatic asylum change him?

5. Sonia and Kitty play essential roles in the success of the clinic. Is this unusual for women of their time and backgrounds? Do you think their personal experiences (Sonia’s unhappy first marriage and Kitty’s debilitating illness) gave them the strength and conviction to defy or overcome the limitations placed on women of the Victorian era?

6. Do Jacques and Thomas agree with Victorian notions about women and marriage? What particular incidents support your point of view?

7. Which of the central relationships in the novel—Thomas and Jacques, Thomas and Kitty, Thomas and Sonia, or Jacques and Sonia—is most compelling? Which is the most sympathetically drawn? What do the men’s relationships with their wives show about each of them as individuals? Does their behavior as husbands and fathers shed light on their professional style?

8. Discuss Faulks’ descriptions of the patients Thomas encounters at the county hospital, the people Jacques and Thomas treat at the Schloss Seeblick sanatorium, and the examples Charcot presents at his seminar [pp. 171-78]. What techniques does he use to bring out both scientific information (or speculation) and the human side of medical practice?

9. Dr. Faverill complains that “the communication between hospitals, the county council and the Home Office is not as it should be” [p. 190]. Is there a similar lack of communication between the medical establishment and public authorities today? If so, what impact does this have on people suffering from mental disorders?

10. Do the formal presentations of the various theories Jacques and Thomas study and, later, develop on their own interrupt the flow of the novel or are they essential to the plot and your understanding of the themes Faulks is exploring?

11. The differences between Jacques and Thomas come to a head when Thomas rejects Jacques’s psychological explanation of Kitty’s symptoms and rushes her to the hospital [pp. 313-34]. What does this incident—and their discussion of it [pp. 348-49]—show about the personal relationship and professional partnership they share? What does it demonstrate about the emotional and intellectual forces that drive each of them?

12. The introduction of and reaction to Darwinism is central to Human Traces. Are the discussions of its significance unique to the time and place of the novel, or are they still relevant today [pp. 416-420]? Is Thomas’s argument that the persistence of dementia praecox indicates that it must somehow be “overwhelmingly advantageous to the development of the human” persuasive [p. 417]?

13. Thomas believes that mankind once literally had “the capacity to hear the voice or voices of the god” and that it was the disappearance of this trait that gave birth to religious faith [p. 220]. Do you think his interpretation of ancient literature (the Odyssey and the Iliad, as well as the stories in the Bible) is valid? Can you think of works of literature in which hearing voices (or other symptoms of insanity) represents a preternatural spiritual awareness?

14. What do Olivier’s words and thoughts convey about the intellectual and emotional turmoil of schizophrenia [pp. 441-45]? What perspective do they offer on the gap between what he and other psychiatric patients understand about their conditions and the perceptions of doctors? Is Olivier’s sense of self (consciousness) inhibited or enhanced by his illness?

15. Thomas discusses how scientific knowledge has changed our definition of what it means to be human [pp. 544-45]. Do you agree with his conclusion that the “fruits of our conscious brains have robbed us of any privileged place in creation”? Is it possible to reconcile Thomas’s theories and the belief in a creator?

16. What role do culture, philosophy, and religion play in your own definition of “being human”? Does Human Traces provide evidence that the study of psychosis can contribute not just to our scientific knowledge of how the brain works, but also to a deeper understanding of the creativity and imagination that separates us from other creatures?

17. Although Faulks cites the work of many scientists, some well known, others quite obscure, he makes no mention of Sigmund Freud. Did you find this disconcerting? What might explain his decision to avoid direct references to the man commonly considered the “father of psychoanalysis”? What aspects of Freud’s work did you recognize in the explanations and/or theories presented in the book? What do these passages reveal about Faulks’s opinions of Freud?

18. Does your knowledge about recent findings and current theories regarding mental illness affect your reactions to Human Traces? Must contemporary readers “forget” what they know about particular events in history, scientific progress, and social change in order to enter the world of historical fiction? Does the experience of reading a twenty-first-century novel about the past differ from the experience of reading a novel written during the time period in which the novel is set?

19. According to the notes at the end of Human Traces, although the main characters are fictional, “all the doctors whose work is either quoted or referred to were real people and did hold the views ascribed to them [p. 651].” Does this give the novel greater meaning or impact?

Sebastian Faulks is the author of seven novels, including Birdsong, Charlotte Gray, The Girl at the Lion d’Or, and On Green Dolphin Street, and a biographical study, The Fatal Englishman. He lives in London with his wife and three children.

The Castle in the Forest
Norman Mailer

The Idea of Perfection
Kate Grenville

The Road Back
Erich Maria Remarque

A Question of Betrayal
Anne Perry

All for Nothing
Walter Kempowski