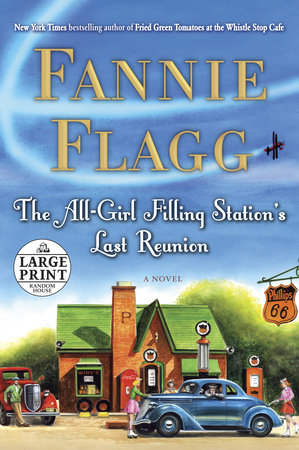 As originally published on SouthernLiving.com

Even after writing eight novels, I am still mystified at the process of writing. Where do the ideas for books really come from? Do writers come up with the ideas on their own? Or are they sent to us from somewhere, or someone, else?

I do know that the idea for Fried Green Tomatoes was literally handed to me in a shoebox. My grandmother’s youngest sister, Bess, ran a little railroad cafe in Irondale, Alabama, a small town on the outskirts of Birmingham. I was raised in the city, and when I was a child I used to love to go out and visit the cafe. At the time, the cafe seemed to be one of the happiest places in the world. Not only was Aunt Bess hilariously funny, but the fried green tomatoes were delicious!

When I was eleven, we moved away from Birmingham, and I only saw Aunt Bess a few more times, but I had grown up hearing stories about her that I would never forget—stories of how her humor and generous spirit had helped everyone in the town get through the Great Depression.

After high school and one year of acting school, I headed to New York and got caught up in my own life, as we do. Years later, somewhere along the way, I remember hearing from my mother that Aunt Bess had sold the cafe. Then one day came the sad news that she had passed away.

Over a decade later, on a nostalgic trip back home to Alabama, I decided to drive out and see the old cafe and say hello to the McMichael family, who had bought the little cafe from Aunt Bess. After I visited the cafe, I thought I might drive by the old family home across the railroad tracks, where Bess had lived.

When I knocked on the door, a lady answered. I introduced myself as Bess’s niece. She knew who I was and said, “Oh, Fannie, I’m so glad you stopped by. Before she died, your Aunt Bess left you something and she asked me to make sure it got into your hands. I’ve been keeping it for you for all these years.” I was dumbfounded. I couldn’t imagine what it could be.

As it turned out, what Aunt Bess had left me was a shoebox full of memorabilia from her life—old photos, her birth certificate, recipes, a child lock of hair, and programs from the funerals of her cooks who had worked for her for over forty years. At the time, I was struck that a small box of papers was all that was left of a life that had been so full and had meant so much to so many people. I thanked the lady and left, but I was still baffled why Aunt Bess wanted me to have these things. She had so many other nieces and nephews that she was much closer to. Why had she left those things to me? I can’t say for sure, but from that shoebox came the book Fried Green Tomatoes at the Whistle Stop Cafe.

Cut to 1999. I was living in California, and one day quite out of the blue, I called Mrs. McMichael in Alabama, the new owner of the cafe, to ask her a question. By then, because of the success of the movie, the cafe had become somewhat of a tourist attraction. When we were talking, Mrs. McMichael said, “Oh, by the way, we have quite an interesting group coming in for lunch today. They are the last living members of the WASPs, who are in town for a reunion.”

Intrigued, I asked, “Who are the WASPs?”

It’s a bunch of gals that used to fly military planes during the Second World War.”

I had never heard of the WASPs before, but being a white-knuckle flyer, I was very impressed and decided to buy the gals lunch. They earned it!

I had completely forgotten all about it until a year later when I was sent a book about the WASPs written by Nancy Batson Crews. Nancy had been at the reunion lunch at the cafe that previous year. At this time, I was in the middle of writing a book and didn’t have time to sit down and read it, but I did look at the photographs and was fascinated about the idea of maybe writing about the WASPs one day.

Almost twelve years later, I had finished I Still Dream About You and, as usual, I was wandering around the house, trying to come up with an idea for a new book. I suddenly found myself staring at my bookcase, and I spotted the book about the women service pilots. I opened it and saw a handwritten message to me that was written by Nancy Batson Crews’s co-writer.

Nancy Batson Crews’s final instructions to me when I left her for the last time were to put an autographed copy of The Originals in your hands. She so appreciated the reunion luncheon at the cafe! I will sign both our names on the title page, as she would have done had she lived long enough.

Thank you from the surviving WASPs.
Sarah Byrn Rickman and Nancy Batson Crews

Needless to say, when I read that note, my hair stood up. Why had I not seen this before? Was it a coincidence that I happened to call the cafe on that particular day in 1999? Was it a coincidence that years later, I happened to pick up that particular book? And if Aunt Bess had not left me that shoebox, would the WASPs have been at that cafe for lunch? Would I ever have known about these brave women if they hadn’t been there the day I called? What is fate and what is simply luck?

Of course, I can’t know anything for sure, but sometimes I wonder if some stories just want to be written and they go out looking for someone to write them. I believe this one did, and I hope you think so too.

1. A lot of Southern identity is wrapped up in one’s family history. “Now, just who are your people?” is an oft-quoted phrase around the region. Sookie’s biggest crisis comes when she realizes that her “people” aren’t actually who she thought they were. How does Sookie’s discovery of her true family affect her identity? How does your own heritage affect your identity?

2. Though Sookie tells us that Lenore’s nickname, “Winged Victory,” came from the way she entered a room—as if she were the statuesque piece on the hood of a car rushing in—how might “Winged Victory” reflect Lenore’s personality in other ways? Does her representation as a classical goddess serve to heighten the air of history and tradition that surrounds her? How might the image of a winged woman tie Lenore in with the ladies of the WASPs?

3. Though Sookie tells us that Lenore’s nickname, “Winged Victory,” came from the way she entered a room—as if she were the statuesque piece on the hood of a car rushing in—how might “Winged Victory” reflect Lenore’s personality in other ways? Does her representation as a classical goddess serve to heighten the air of history and tradition that surrounds her? How might the image of a winged woman tie Lenore in with the ladies of the WASPs?

4. Sookie’s best friend, Marvaleen, is constantly trying different suggestions from her life coach, Edna Yorba Zorbra. From journaling to yoga to the Goddess Within group, which meets in a yurt, Marvaleen tries every method possible to get over her divorce. How does Sookie’s approach to dealing with her problems differ from Marvaleen’s? Do you think her friendship with Marvaleen might have helped push her to confront the question of her mother?

5. In The All-Girl Filling Station’s Last Reunion, we learn about a mostly unknown part of American history—the WASPs of World War II. These women went for thirty-five years without recognition because their records of service were sealed and classified. Were you surprised to learn about this? What parts of the WASPs’ story spoke to you?

6. As Sookie comes to terms with her new identity, so must the rest of her family. Sookie’s realization that “Dee Dee may not be a Simmons by birth, but she was certainly Lenore’s granddaughter, all right” becomes a comforting thought. Have there been times in your life when you have felt so connected to people that you considered them family? What types of circumstances can create such a bond?

7. Sookie tells her friend one day, “I’m telling you, Dena, when you live long enough to see your children begin to look at you with different eyes, and you can look at them not as your children, but as people, it’s worth getting older with all the creaks and wrinkles.” Have you experienced this change yet with your own parents or children? If so, what were the circumstances in which you began to see them in a different light? How did this make your relationship even more special?

8. “Blue Jay Away,” Sookie’s brand-new invention, keeps Sookie’s house finches and chickadees fed, while also making Sookie famous. Who do you think have been the blue jays in Sookie’s own life? Has she learned to manage them successfully?

9. As Pat Conroy says, Fannie Flagg can make even the Polish seem Southern. A large part of Southern and Polish identity is found in their culture—the food, the music, the values. What are some of the things that are unique to your culture? How do they help bring people together?

10. Throughout the book, Dee Dee and Lenore often represent many characteristics that Sookie finds frustrating about being a Simmons, such as the time Dee Dee had to be driven to the church in the back of a moving van so that her Gone with the Wind wedding dress wouldn’t be messed up. Once Sookie gains perspective on her family, however, she comes to love and accept Dee Dee’s obsession with their history. Have there been times when your own friends or family have frustrated you with their opinions? How were you able to gain perspective and accept their differences?

11. A major theme in this book is accepting your home. Sookie experiences a homecoming many times—after she first meets Fritzi and returns to Point Clear, when she goes to Lenore’s bedside at Westminster Village, and when she flies to Pulaski for the All-Girl Filling Station’s last reunion. What is your favorite part about going home? Who are the people who make home a home for you?

A Week in Winter

The Sound of Glass