The Lincolns: A Scrapbook Look at Abraham and Mary Teacher’s Guide 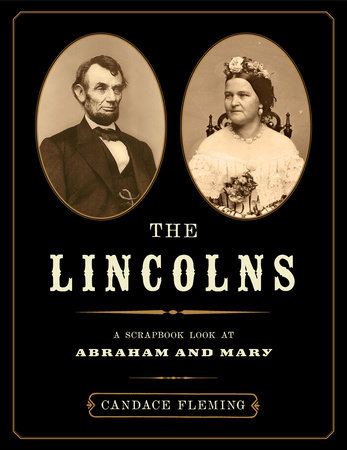 The Lincolns: A Scrapbook Look at Abraham and Mary Teacher’s Guide

pdf
The Lincolns: A Scrapbook Look at Abraham and Mary Teacher’s Guide

“It is the everyday events–the dinner table conversations and the complaints about ill-fitting boots–that truly bring the Lincolns to life. It is the mundane that makes them real. And it is the ordinary that will, I hope, leave you feeling as if you have just visited old friends.”–Candace Fleming

The basic facts of beloved president Abraham Lincoln’s life are taught in American schools as early as kindergarten. In The Lincolns: A Scrapbook Look at Abraham and Mary, award-winning author Candace Fleming moves well beyond the basics by delving deeper into who Lincoln was as a son, a husband, a father, a friend, and, yes, a president. In addition, she reveals the complex Mary Todd to be a person in her own right, not as merely the wife of a great man.

This museum-in-a-book is organized as a historical scrapbook, loaded with images of primary source documents, such as newspaper articles, photographs, and election memorabilia. Accompanied by insightful and thoroughly researched text, these visuals lend The Lincolns an authenticity and realism that present Abraham and Mary as living, breathing people who worked hard, endured loss, made tough choices, maintained friendships, and celebrated accomplishments.

• Use the book as a research source when studying Lincoln, the Civil War, or slavery.
• When studying the life of Abraham Lincoln, place students into groups, assigning each group one chapter to read and report on to the class.
• Refer students to the book when teaching about using historical source documents to support research.

Chapter One:
Backwoods Boy
Questions for Group Discussion
-Have students read the pieces on pages four and five, “On Knob Creek” and “The Little Pigeon Creek Years.” Discuss how these experiences and lessons helped form who Abraham would become as an adult. What do these descriptions of the young Lincoln reveal about his character? Have students look for other examples in this chapter that speak to Lincoln’s character and
discuss those examples as a class.
-Although Lincoln suffered an awful loss in the death of his mother, Nancy, how did his stepmother, Sarah Bush, contribute to Abraham’s life in ways that would later serve him as president?
-After reading this chapter, it is clear that the young Abraham was a gifted child, yet he was described by his cousin as, “always reading—scribbling—ciphering—writing poetry,” (p. 9) as if these interests were negative ones for a boy to have. Why didn’t his family and friends value his quick mind and academic interests? How do you think young Abraham felt among his peers?

Curriculum Connections
-Many of the illustrations in this chapter, such as the one on page 9 that depicts Abraham earning his first dollar, were commonly published in newspapers and journals after Lincoln had achieved national fame. Have students create a pencil sketch that illustrates one of the events or anecdotes from this chapter.
-Have students design a campaign poster as if the young Abraham Lincoln were running to be your school’s class president. The posters should include a slogan and an illustration that captures and promotes the candidate’s strengths.

Chapter Two:
Bluegrass Girl
Questions for Group Discussion
-As a class, find and discuss examples of how Mary Todd was and was not a typical product of her time and environment.
-Discuss how Mary’s childhood differed from Abraham’s. Then discuss some of the commonalities in their early years, such as the loss of a mother, and how these major life experiences shaped them as adults.
-Read aloud the top of page 23, “School Days.” Discuss the state of women’s rights in the first half of the 19th century. If possible, bring in a copy of Mary Wollstonecraft’s groundbreaking book, and read selections of it to the class. Discuss other key figures in the history of women’s rights, such as Elizabeth Cady Stanton and Susan B. Anthony.
-How did having an education both help and hinder Mary in 19th-century society? How did having an education influence her opinions and beliefs on slavery?

Curriculum Connection
-On pages 26 and 27, the author describes the southern world in which Mary Todd grew up, a world that relied on the use of slaves. On these pages, readers can study five primary source images illustrating aspects of the slave trade. Instruct students to do Internet research to find other primary source images depicting slavery in 19th-century America. Students can compile the images into an album and write accompanying texts and captions.


Chapter Three:
The Happiest Stages of Life
Questions for Group Discussion
-Discuss how Abraham perceived himself as a young single man living in Springfield. How did others perceive him? What character and personality traits do you think Mary admired in Abraham?
-Discuss Mary’s reply when asked what she saw in Abraham. She called him a diamond in the rough. “Imagine what joy it would bring to see his beauty and brilliance shine out more clearly each day. After all, the important thing is the diamond itself, clear and flawless under its film.” (p. 32) What does this statement tell you about Mary’s values and character?
-Discuss Abraham’s Rules for Being a Good Lawyer (p. 39), especially this rule: “There is a vague popular belief that lawyers . . . are dishonest. Let no young man choosing the law . . . yield to this belief.” How did Abraham’s honesty and candor in his law practice help to propel him to the presidency?

Curriculum Connection
-Have students pretend that Abraham and Mary, both single and living in Springfield, Illinois, in the present day, decide to place a profile on a computer dating service. Based on the information from this chapter, half of the class will write a 100-word profile for Abraham, and the other half will do the same for Mary. The profiles should “paint a portrait” of the two individuals as they were in their young adulthood. Have students read their portraits aloud to the class.

Chapter Four:
Tumultuous Times
Questions for Group Discussion
-Read and discuss the two quotes on the first page of this chapter. How are these statements in conflict? Discuss the “House Divided” speech shown on page 61. Why was this speech such a courageous act, both politically and morally?
-Discuss examples from this chapter that illustrate the positive aspects of Abraham and Mary’s relationship. How did Mary influence Abraham in his political career? Why do you think so many of Abraham’s
colleagues resented her?

Curriculum Connection
-On page 65, readers see “an especially handsome” photograph of Lincoln just six months before he would become president. The caption states that the image was retouched to make Lincoln appear more attractive. Have students look through newspapers and magazines for images of politicians seen in both flattering and non-flattering ways. Encourage them to examine why editors make certain choices when deciding which photographs to include.


Chapter Five: And the War
Came: Washington, 1861
Questions for Group Discussion
-After reading pages 86 and 87, “Mischief in the White House,” ask students to share their opinions of Abraham as a father.
-Read “President Lincoln Tramples on Civil Liberty.” (p. 85) Discuss how Lincoln’s decision to suspend the writ of habeas corpus during the Civil War compares with actions taken by the Bush administration after the terrorist attack of September 11, 2001, such as the PATRIOT Act.


Chapter Six:
This Awful Burden:
Washington, 1862—1863
Questions for Group Discussion
-Have student read and discuss “The Lincolns on Slavery, 1862,” focusing on Mary’s willingness to visit and assist former slaves, known as “contraband,” living on the outskirts of the capitol. (pp. 96—98), What do her actions tell you about her humanity and sense of justice?
-Why was the Emancipation Proclamation such an important document, even though upon its publication it did not actually free any slaves in the Confederacy? Why did Lincoln wait until 1862 to write the Emancipation Proclamation, even though he detested slavery and wanted to see it abolished?
-Place students in small groups and have them read the Gettysburg Address and discuss its meaning. (p. 112) Challenge students to explain why many historians consider the Gettysburg Address to be “the single greatest speech in American history.” (p. 112)

Chapter Seven:
With Charity for All:
Washington, 1863—1864
Questions for Group Discussion
-Have students find and discuss examples of Abraham’s humor, compassion, honesty, and humility.
-Not everyone was a fan of the 16th president. Give students time to read and study the section on the bottom of page 122, “Woodcuts from an Anti-Lincoln Biography, 1864.” Discuss the meanings of the illustrations and captions.
-Discuss Lincoln’s remarks during his second inaugural address. How is the tone of the speech indicative of Abraham’s core belief system?

Curriculum Connection
-Share some of the “famous firsts” from Lincoln’s presidency shown on page 129. Let students choose one of these “firsts” to research.


Chapter Eight:
Blind from Weeping
Questions for Group Discussion
-On page 141, the author describes the funeral procession and the viewing of the president’s body in the Capitol rotunda. The author quotes a journalist
who was there and wrote, “All were sad; many wept openly.” After having read his book, challenge students to describe why citizens were so deeply saddened by Abraham’s Lincoln’s death.
-After Abraham’s death, Mary struggled with family relationships, finances, and her own mental and physical health. Discuss Mary’s life in the years after her husband’s death. Do you think she made poor decisions? Do you think she was treated in a way befitting a former first lady?

Curriculum Connections
-Challenge students to write an obituary for both Abraham Lincoln and Mary Todd Lincoln. Provide students with examples of contemporary obituaries to use as models, such as those published in the New York Times. Give students time to read their pieces aloud to the class.

Most middle-grade and high school students know some basic facts about the 16th President of the United States, but probably know little about his wife, Mary Todd. Before introducing The Lincolns, activate students’ background knowledge using a Venn diagram to organize any facts, myths, or other miscellaneous information students may have about this famous pair. The circle dedicated to Lincoln may be full of information, while that representing Mary Todd will be most likely relatively empty. The intersection of each may have some basic facts. As this book presents hundreds of facts about the lives of Abe and Mary, have students complete an additional Venn diagram after reading The Lincolns as a way to graphically organize their learning.

In the book’s introduction, the author writes, “Rather than presenting entries in strict chronological order, I have chosen to divide some of the information by key themes, such as growing up with slavery, being a parent, and political ambition.” Spend some time previewing The Lincolns with students to familiarize them with how the book is organized.

Have students try to define unfamiliar words using clues from the context of the story. Such words may include: slavery, fetching, grumblin’, feller, plucky, Union, scurry, homespun, mite, queasy, and moral.


Learn More About The Lincolns: A Scrapbook Look at Abraham and Mary
pdf

Through the Looking-Glass
Lewis Carroll

Behind the Blue and Gray
Delia Ray

Winnie The Pooh Deluxe Gift Box
A. A. Milne

The Book of the Maidservant
Rebecca Barnhouse

To Pluto and Beyond
Elaine Scott

The Sands of Shark Island
Alexander McCall Smith
Back to Top