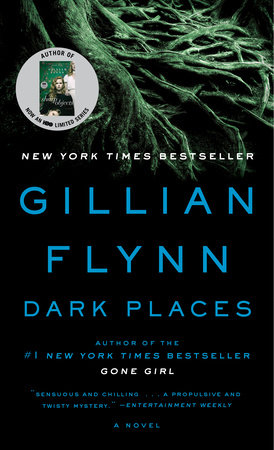 A Readers’ Guide for Dark Places by Gillian Flynn

In order to provide reading groups with the most informed and thought-provoking questions possible, it is necessary to reveal important aspects of the plot of this novel. If you have not finished reading Dark Places, we respectfully suggest that you wait before reviewing this guide.

Introduction
Libby Day has been unwillingly famous since age seven—when her family was massacred, and the brother she once adored was convicted of the crimes based on her accusation. Now in her thirties, Libby finds that the donated funds in her “Baby Day” account are nearly gone, and her financial supporters have moved on to fresher crimes. After decades of avoiding responsibility and effort, Libby is in need of a job.

The project that presents itself seems like an easy way to start: a “guest star” appearance for a group of true-crime fanatics who will happily pay to pick her brain about the “Kinnakee Kansas Farmhouse Massacre.” The fact that their version of the story differs from hers is merely an annoyance at first.  But as doubt begins to needle at her long-held convictions, Libby takes another look at that long-ago night, and the dark place she’s run from since childhood.

1. Did you like Libby as a character? Do you think the author intended for her to be likeable?

2. As the book shifted between points of view, did you find one most appealing, most enlightening, or most reliable?

3. Why has Libby ignored Jim Jeffreys’s advice to earn an income for so many years? Do you believe she feels she’s earned the money she’s been gifted by strangers? What is her attitude toward money?

4. Throughout the book, many characters seem to feel as though life is something that happens to them; others take a more proactive role in steering its course, often with disastrous consequences. Discuss the book’s theme of action versus reaction, investigation versus acceptance. Where does Libby’s behavior fit in this contrast?

5. Like others Libby meets during her investigation, Barb Eichel seems pleased to have been contacted, having “wondered if you’d ever get in touch.” Why did Barb wait for Libby to come to her? Did Barb do enough to remedy the harm she thinks her book has done?

6. As Lyle first brings Libby through the Kill Club gathering, he distinguishes between different types of members—role players and solvers, for instance. Do you consider these to be meaningful differences? How do the various groups make use of the club?

7. In considering the case of the missing girl Lisette Stephens, Libby thinks to herself, “There was nothing to solve . . . She just vanished for no reason anyone could think of, except she was pretty.” Do you think it’s strange that Libby considers this an uninteresting case? What does her attitude toward Lisette say about her view of her own family’s murder? Was there something to “solve” in the Days’ murder?

8. What do you make of Magda, the middle-class Kill Club member so fond of Ben, and so callous to her own son? What does her character tell us, if anything, about the Kill Club and its members?

9. One of the appealing aspects of the Day case (according to Lyle) is the role of children as instigators, victims, and unreliable witnesses. Do you see any similarities among Krissi’s accusation, Libby’s false eyewitness account, and Lyle’s role in the California fires? Were these children to blame for their mistakes? In what ways did they attempt to right the wrongs they caused?

10. “No one ever forgives me for anything,” one character says. What role does forgiveness play in Dark Places? Which characters should be more forgiving? Less?

11. What do you think of Diondra’s relationships? Why is she attracted to Ben? Why is Trey such a constant companion? Do you think she was romantically involved with Trey?

12. Patty Day frequently worries whether she is a good mother. What do you think? How does the book depict parents in general? Who do you consider the “good” and “bad” parents in the book?

13. Did you think Ben was guilty? Does the author intend for us to doubt him?

15. Why do you think Libby, at the end of the book, thinks twice before shoplifting? Is this reflective of a new attitude toward the world? How?

16. Do you think Ben will find Crystal? What do you imagine their reunion would be like?

17. Why do you think the author chose to set the murders on a farm? What images and themes does the heartland and farming evoke?

18. Libby is a liar, a manipulator, a kleptomaniac, and an opportunist. Does she have any redeeming qualities? Are you able to empathize with her? If so, why?

In the Woods
Tana French

The Boy in the Suitcase
Lene Kaaberbol and Agnete Friis

I Let You Go
Clare Mackintosh
Back to Top