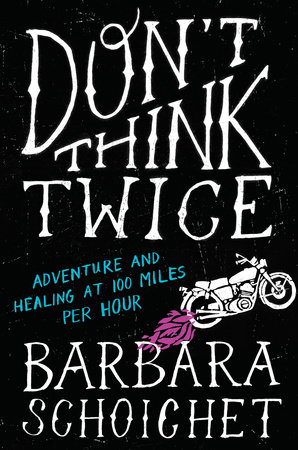 1.       Don’t Think Twice is a story of grief, loss, and healing. But it is also at times a profoundly funny story, and Barbara Schoichet is a keen observer of life’s absurdities. Which moment in the book did you find the most moving? The most humorous? In your own life, do you find humor to be an important part of the coping process?

2.       Near the beginning of Barbara’s memoir she has a dream that her mother dies, and then it happens in reality. She also relates a recurring dream about her family sitting around a table and discussing their problems. Have you ever dreamt something that then came true? Do you have recurring dreams that impact your life?

3.       Consider the arc of feelings Barbara experiences about her relationship with her mother. How did she work her way through the anger she expresses in the beginning of the book to the gratitude she shows in the end? And what about her father? Though he passed away many years before, how did he impact her journey?

4.       Though very different from her, Barbara’s sisters are prominent in her life, and their role in Don’t Think Twice is often motherly. How does this play into Barbara’s difficulty with growing up and her sense of what defines adulthood? Did her sisters help or hinder her coming of age, and did your siblings (or lack of them) alter your path to maturity?

5.       The story is populated with colorful people—some Barbara meets before she leaves Los Angeles, like her motorcycle instructor Bart Mange and Lester Himple from AAA; others she meets on the road, like the Daves in Buffalo, and the rabbi under the giant cross. Which character(s) stood out to you most? What does each add to Barbara’s journey?

6.       In a sense, the motorcycle in Don’t Think Twice is a character as well. It is also a metaphor for many things that attract Barbara and symbolic of the power she hopes to regain. Do you understand any part of her attraction for this machine? Given the chance, what method of healing through adventure would you choose?

7.       Barbara struggles with various aspects of her identity. Of course, she has trouble facing her sudden status as an adult orphan, but she also questions her gay identity, reflects upon her Jewish heritage, and often wonders how to relate to those in her newfound biker domain. How many worlds do you inhabit, and are you comfortable with all aspects of each world?

8.       Through her experiences with road whimsy and unexpected delays, Barbara learns that planning ahead on a motorcycle trip can be impractical, if not impossible. That is one reason her memoir is called Don’t Think Twice. What are some other reasons for this title, and have there been times in your life when too much thinking has kept you from undertaking something? Are there roads in your life that you regret experiencing or not experiencing?

9.       On various occasions, Barbara experiences eerie yet comforting feelings that her deceased parents are with her. Often her mother shows up in her head or appears in the mirror. What did you think of these occurrences, and how do they affect Barbara? Do you believe in connections between the physical world and the spiritual realm, and have you ever experienced the return of a deceased loved one?

10.   In Gatlinburg, Barbara meets Madame Zabrina, a tarot card reader, whom she does not take seriously until the end of the book. Have you ever gone to a fortune-teller of sorts who you dismissed . . . but then came to realize she might have actually “seen” something in your future?

11.   As Barbara approaches Santa Fe, she becomes preoccupied with finding a woman named Mai, whom she’d met briefly twenty years before. This is her fantasy of the perfect love that got away. Do you think everyone is prone to some degree of magical thinking, of believing there is a Cinderella or Prince Charming out there?

12.   Near the end of her trip, Barbara reflects that when she gets home to Los Angeles, there will be no Hollywood ending—nothing that was wrong before will have miraculously changed in her absence. Yet, the trip did change things for Barbara. How, and why?
Learn More About Don’t Think Twice
print

The Other Side of Air

In Spite of Everything

Stirring the Pot
Back to Top