Anatomy of a Soldier Reader’s Guide 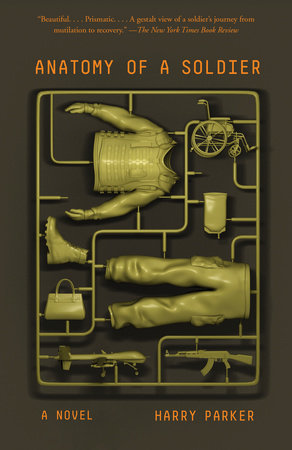 Anatomy of a Soldier Reader’s Guide

The questions, discussion topics, and reading list that follow are intended to enhance your reading group’s conversation about Anatomy of a Soldier, Harry Parker’s stunning and visceral debut novel that explores the complex and myriad facets of a soldier’s life—from the mundane to the tragic.

Here is the unforgettable story of Captain Tom Barnes, whom we first meet as he is leading British troops in Afghanistan. We then meet two young Afghani boys—and the man who trains one of them to fight against the infidel invaders. Finally, there are the family and friends who radiate out from these lives: the people on all sides of a war where virtually everyone is caught up in something unthinkable. But this novel regards them not as they see themselves but as the objects surrounding them do: a helmet, a bag of fertilizer, a beer glass, dog tags—and a horrific improvised explosive device that binds them all together by blowing one of them apart. A work of extraordinary humanity and hope, Anatomy of a Soldier takes its place among the great novels that articulate the lives of soldiers. In the boom of an instant, we see things we’ve never understood so clearly before.

1. Discuss the narrative perspective that the author employs in Anatomy of a Soldier. How did Parker’s use of the objects as narrators help to create both a peripheral and intimate perspective on war and how it affects soldiers?

2. In the opening chapter of the book, Barnes is introduced to the reader as BA5799, and he is referred to by both names interchangeably throughout the novel. Why do you think Parker chose to do this? What effect did it have on you as a reader?

3. How would you describe Captain Tom Barnes? Given the fractured narrative structure, how did your understanding of the character evolve over the course of the novel?

4. Discuss the importance of ritual in the life of Captain Barnes pre-injury and post-injury. When is the change in his daily routine most acutely felt after his injury?

6. Describe Barnes’s support system after his injury. Who or what comforts him most? How do his relationships with his peers change? His relationship with his family?

7. What attracted Latif to the path he chose in life? When does he feel most conflicted about his decision? How would you describe his relationship with Aktar?

8. In chapter 24, Kushan Hhan takes a serious risk by inviting Captain Barnes into his home. How would you describe their interaction? How does Aadela, Kushan’s wife, feel about their visit?

9. Discuss the scene in chapter 38 where Barnes has a tense discussion with his friend James. What angers Barnes most about James’s comment about Barnes’s internal strength? How is this interaction—and other interactions with friends—colored with a sense of isolation and loss?

10. What does Parker’s use of objects as narrators assert about the impersonal aspect of modern warfare? How does technology factor into the way we fight wars today?

11. Key passages in Anatomy of a Soldier are graphic in their corporeal description. How does Parker’s visceral realism help to paint a clear portrait of wartime tragedy? What scene was most impactful for you?

12. Captain Barnes grapples with issues of confidence after his injury. How does his sense of self change over the course of the novel? By the end of Anatomy of a Soldier, would you assert that he has a positive self-image?

13. Discuss the scene where Barnes receives the medal of bravery for service in the military. Describe his emotions during the ceremony. How did Parker’s choice to have the narration from the point of view of the medal itself help to emphasize Barnes’s emotional distance from the award?

14. Anatomy of a Soldier is told in a nonlinear fashion, with jumps in time, place, and perspective. How does this create a sense of anxiety during the reading experience? How does the slow reveal of details reflect Barnes’s complicated journey of healing?

15. Though the journey of Captain Barnes is at the heart of Anatomy of a Soldier, it is also a novel about the human toll of warfare more generally. How does Parker explore the concept of loss? How does it affect each of the novel’s characters?

16. Discuss the last chapter of the book. How would you describe Barnes’s emotional state during this scene? Describe your own emotional journey during the read. What did you find to be the most important lesson or message that this novel imparted?

Harry Parker grew up in Wiltshire and was educated at University College London. He joined the British Army when he was twenty-three and served in Iraq in 2007 and Afghanistan in 2009. He now lives in London. He’s also a painter, attends art school, and has completed a postgrad degree at the Royal Drawing School. He sea-kayaks in his spare time.
Learn More About Anatomy of a Soldier
print

The Bible of Clay
Julia Navarro

The Use of Man
Aleksandar Tisma

The Castle in the Forest
Norman Mailer

The King Is Dead
Jim Lewis

A River Town
Thomas Keneally
Back to Top