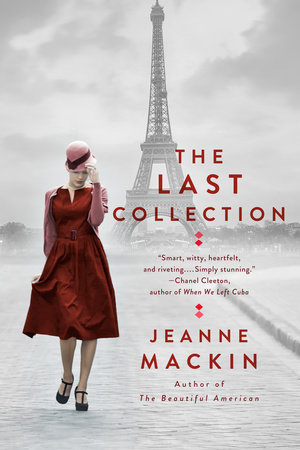 1. At the heart of this novel is this question: how do we continue to live fulfilling private lives in a society that is doing its best to divide us, politically and culturally? Pre–World War II Paris was full of dichotomies, the most obvious being the choice between communism and fascism. What other divisions do you see in this story? Do you see parallels to today?

2. When Lily fell in love with Otto, she realized that she was, in fact, falling in love with a man who would be fighting against her own country, perhaps even her own brother. How did she make her peace with this terrible choice?

3. Coco Chanel and Elsa Schiaparelli disagreed on what patriotism required of them during the German occupation of Paris. Chanel decided to close her couture salon and lay off her workers rather than sell her clothes to the occupying Germans. Schiap chose to keep her salon and to continue to pay as many of her workers as possible, even though it meant welcoming German officers into the shop. Which decision would you have made and why?

4. The narrator, Lily, had strong emotional reactions to different colors. Lilies are often associated with the color white, which is the sum of all color wavelengths, not, as some people think, the absence of all color. (If you shine the primary colors of red, blue, and yellow on a white paper, you’ll see white where the colors overlap.) What influence did the love of color have on Lily?

5. What are your emotional responses to color? Do you have a favorite color that always lightens your mood? Is there a color you try to avoid? What events in your life might have helped form those preferences?

6. There were many differences between Chanel and Schiaparelli, some reinforced by their rivalry and animosity toward each other. Chanel, for instance, insisted that as a couturier she was a craftswoman, while Schiap insisted that couturiers were artists. Do you think couture fashion is art? Have you visited a museum where clothing was being exhibited, and what did you think of the exhibit?

7. Schiap’s daughter, Gogo, came down with polio just when Schiap, abandoned by her husband, had to learn how to work and support herself and her daughter. She had to work long hours and spent days, even weeks, away from her child when Gogo needed her the most. How do you think this affected their relationship?

8. Why do you think Chanel invented a story about being educated in a convent rather than admitting to having been raised in an orphanage after her mother died and her father abandoned the family?

9. If you could wear clothing from any time or any place, what would you choose?

10. When Lily was in a period of great grief, she stopped caring about her appearance. What do you think is the relationship between clothes and our emotions?

11. The novel is structured in three sections, one for each primary color. How does the action in each section reflect Lily’s emotional response to that particular color?

12. There are several love stories in this novel. Which one affected you the most? Why?
Learn More About The Last Collection
print