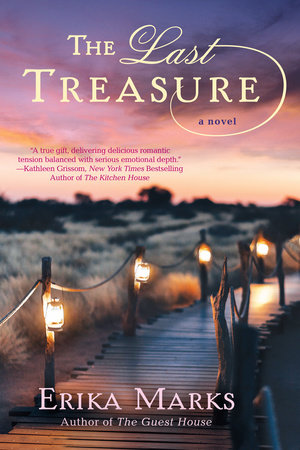 A Conversation Between Erika Marks and Her Editor

Editor: What made you center a novel around a shipwreck? How did you come to use the story of Theodosia Burr Alston and the Patriot in this novel? Was it a part of the novel from the outset?

Erika: I have long been fascinated with shipwrecks. I grew up near the ocean, so sailing history and the legends of the many ships lost along Maine’s rocky coastline buried themselves in my imagination from an early age. When I was researching lighthouses for The Mermaid Collector, I knew I would eventually thread a shipwreck into a later novel—the only question was how.
While I had always planned to have Liv, Whit, and Sam pursue a mysterious shipwreck, I assumed I would have to imagine one for the story. Then, as so often happens in writing, remarkable narrative roads intersected and provided me with something different. While doing research on the Outer Banks, I discovered the history of the Patriot and her most famous passenger, Theodosia Burr Alston, who, upon further investigation, proved as fascinating a subject as the ship she disappeared with. Curiously enough, Theodosia, like my present-day character Liv, had a complicated and deeply dependent relationship with her father, Aaron Burr. The parallels between the two women were too remarkable to ignore—so how could I not bring the Patriot and Theodosia into my story?

Editor: The Last Treasure features a love triangle—something you explored in previous novels, such as Little Gale Gumbo and The Guest House. What about this concept interests you?

Erika: I think there is something fundamentally exciting and fascinating about watching two men vie for a woman’s love. I remember seeing a performance of Camelot when I was young and being fascinated by the dynamic of Arthur and Lancelot vying for the attention of Guenevere—not who would choose her, but who would she choose, and why? Whose love was right for her, and how did she balance that choice in her heart? And when the three people are all close friends, does that strain affect their unit as a whole? Love and desire change us at our core—and the ripples of our feelings spread far out into the pond of our lives. In The Guest House, Edie, who is a fiercely unconventional young woman, finds herself smitten with a charming summer visitor and yet also confused by her growing feelings for a man she has always considered a bossy, older-brother type. The reader follows her journey to discover which suitor is ultimately the one her heart craves, and the road getting there is, of course, bumpy and full of unexpected turns.
For The Last Treasure, I wanted to explore the dynamics of two very different men in one woman’s heart. Whit and Sam came easily to me—especially Whit, whom I loved deeply from the very start. Despite his messiness and his reckless ways, his love for Liv is unwavering, and that level of unabashed desire and certainty is, to me, the sexiest quality in a leading man. So often the “bad boy” is patently unfaithful, his lothario ways somehow romanticized, which I think is a fatal flaw. I can forgive a man most anything in a novel, if his heart remains faithful to the woman he loves, and Whit’s always does—even when his actions suggest he can’t get out of his own way at times.
With Sam, I wanted to explore the man who appears to be the total package on the surface—attractive, responsible, faithful, dependable—but over time, he reveals himself to be someone very different. All of us grow through relationships—or hope to—and what we think makes sense in a partner isn’t always right for us, and it can take a long time to understand that distinction. I wanted to explore Liv’s evolution of listening to her heart, to see her finally breaking away from familiar patterns of her past—her father’s control, her fears of taking risks and of being alone—to find her happiness.
I loved Liv’s duplicity—sometimes she is fiercely defiant; other times she is terrifically fragile—and I wanted to watch how she would reveal herself in the company of men who spoke differently to those contrasting personality traits—and ultimately, which one would allow her to be her most honest self, which I think is the measure of true love.
When the novel opens, Liv is on the threshold of possibility—her marriage is strained to the breaking point and her old lover comes back into her life. What would a woman do when faced with that opportunity to revisit—and possibly rework—the past? Would she find her heart’s mind changed by nostalgia or would it be a chance to be reminded of all that is right in her marriage? I knew Whit would have to work to win her back—and I wanted very much to see him succeed, but I also wanted the readers to be waiting for that mystery to be solved, just as they were for the mystery of the Patriot.

Editor: What intrigues you about writing stories that have a contemporary/present story as well as a past story? Why do you enjoy writing about people at various points/periods of their lives? What does that enable you to do as a writer with the story?

Erika: I love this question because I have often asked myself this when I begin a novel and find myself invariably drawn to the structure of moving back and forth in time with my characters. I myself tend to hyperanalyze most everything in my life (don’t we all?), so I’m always drawn to characters who are at a place in their lives where they are facing a crisis of some kind that requires them to dig deep into their pasts in order to move toward their futures. So often we rewrite our histories to suit our emotional needs, which is all well and good—until someone enters that story and reminds us that maybe what we’ve been telling ourselves for so long isn’t the reality.
In the case of Liv, when the reader meets her, she is vulnerable and torn. She loves Whit desperately but is forced to consider whether she can continue to stay married to him. During this, she is reunited with Sam—the ex-boyfriend who was once everything stable and safe in her life. How can she not reconsider the choice she made to leave their relationship?
Structuring the novel by moving between the present and the past allowed me to explore the evolution of these characters as individuals, as pairs, and as a trio. It also allowed me to show the reader the foundation that Liv’s marriage—and her relationship with Sam—is built upon. Not only that, but looking back allows Liv the opportunity to revisit the truth of her history with both men—and to be honest with herself and her heart at a time when she might easily rewrite her past to suit her present.
It is that moment of indecision, that gripping flash of consideration, that intrigues me as a writer; a pivotal instant in a person’s story that has been building up for years and years. In life, we rarely have the opportunity for leisurely reflection in the midst of emotional distress—in fiction, we can grant our characters that gift.
Questions For Discussion
1. While the end of the novel indicates that the mystery of the Patriot was solved by the discovery of Theodosia’s diary, Whit brings Liv possible proof of an alternate solution. Which do you believe is the real story? Do you believe Theodosia wished to have absolution by writing the diary to her father? Do you like to imagine the diary was eventually delivered to him?

2. Though they lived nearly two hundred years apart, in what ways are Liv and Theodosia similar? Why do you believe Liv is so devoted to solving the mystery of what happened to Theodosia, and why is she attached to the theory that Theodosia ultimately escaped from the ship? Do you think Liv sees herself in Theodosia? How?

3. At one point, Liv’s mother claims that “People aren’t always who you think they are” in reference to Liv’s father. To whom else in the novel could this statement apply?

4. Throughout the novel, feeling at odds with her marriage, Liv is given the opportunity to revisit her past with both Sam and Whit—and possibly be given a chance to make a different choice in her present. Do you feel the choice she makes at the novel’s end is the best for her? Was it the choice you’d hoped she’d make?

5. Sam claims he isn’t sure why he took the chart when he broke up with Liv. Why do you think he did it?

6. The novel’s nautical themes of “wrecks” and “salvage” could also relate to the emotional journey of each of the main characters, who all act in ways that derail their happiness at one point or another. Did you find yourself rooting for one character’s redemption more than another’s? Were you satisfied that each character grew through his or her mistakes by the end of the novel and emerged as more emotionally healthy people? Who did, and who didn’t?

7. Just as Whit and Sam are two very different men, Liv acts differently around each one. Which man brings out her most authentic self? Which one ultimately gives her what she wants? What about what she needs?

8. The reader senses Whit’s attraction to Liv (as does Sam) long before Liv will admit to it herself—why do you suppose that is? Do you believe her attraction to Whit was there all along? If not, when do you think Liv first became aware she had feelings for Whit beyond friendship?

9. Did Sam’s later confession regarding what happened after leaving Zephyr’s Restaurant surprise or shock you? Why, or why not?

10. What did you think of the final scene between Whit and Sam? Do you believe the men came to a place of peace—or do you think that isn’t in the cards for them?
Learn More About The Last Treasure
print

The Way of Women
Lauraine Snelling

Ours for a Season
Kim Vogel Sawyer

All Stirred Up
Brianne Moore

Those Secrets We Keep
Emily Liebert

More Than You Know
Penny Vincenzi

A Rather Lovely Inheritance
C.A. Belmond

House of Wonder
Sarah Healy
Back to Top