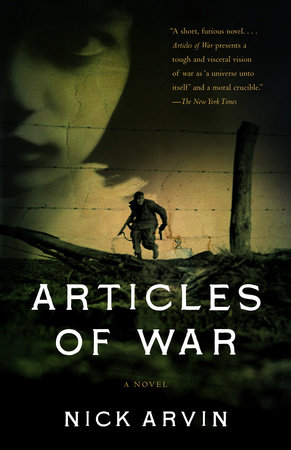 “A short, furious novel. . . . Articles of War presents a tough and visceral vision of war as ‘a universe unto itself’ and a moral crucible.” –The New York Times

The introduction, discussion questions, suggestions for further reading, and author biography that follow are designed to enhance your group’s discussion of Articles of War, Nick Arvin’s harrowing novel about one’s soldier’s confrontation with his own fear during World War II.

Exploring the actions and consciousness of a single ordinary soldier as he navigates the violence of World War II, Articles of War gives readers an unflinching look at what war demands of the young men who are thrust into the hell of combat.

When George Tilson, an eighteen-year-old farm boy from Iowa, arrives in boot camp he is given the nickname “Heck” because he will not curse. Aloof and solitary, he feels a mild contempt for his fellow recruits who struggle in training, but the thought of battle inspires “a fear he tried to avoid by directing his attention to the details of his tasks” [p. 3] It is this fear, which will deepen and paralyze Heck when he reaches the fighting in Normandy, that forms the novel’s emotional center. Just before he is sent into combat, Heck encounters a family of French refugees when he finds a boy who has stepped on a landmine. Heck’s awkward sexual experience with the boy’s sister, Claire, profoundly unsettles him, and in his first act of cowardice, he flees from her, and she haunts his memory in the months that follow. As the horrors of combat descend upon him, and he witnesses soldiers being blown apart, buildings blasted to ruins, corpses hanging from trees, and all the other grisly realities of war, Heck is forced to face his fear again and again, until he feels certain he will either go mad or be killed. Heck thinks he sees a way to get himself sent home and takes a step that brings to fruition all the anxiety he has experienced. His action, however, leads him not away from death and violence but into a stark confrontation with it.

Written with a relentless power and emotional directness reminiscent of the best war fiction, Articles of War offers a brilliant and unsettling account of the fear that the literature of war rarely depicts.

1. In what ways does Articles of War differ from most literary and cinematic depictions of war? What is the value of writing about war not from a heroic point of view but from the perspective of someone who is paralyzed by fear? What does the novel tell us about the essential nature of war and what it does to those who are asked to engage in battle?

2. What does George Tilson’s nickname, Heck, reveal about his character? In what sense is his refusal to curse a harbinger of his actions?

3. Why does Heck run away from Claire instead of making love to her? How does this turning away affect his later actions? What is the symbolic significance that the encounter takes place in a cave?

4. Should Heck be considered a coward, a young man unsure of himself, or a victim of the stresses of war? At what moments in the novel does he make cowardly decisions? At what points does he demonstrate bravery?

5. When he is at the hospital, Heck is so “mired in his own problems” that “the men around him had remained more or less indistinguishable” [p. 81]. Why doesn’t Heck feel a greater sense of camaraderie with his fellow soldiers? How does this lack of a bond influence his behavior during combat? Why doesn’t he seem to be aware of or committed to the purpose of the war?

6. Why does Conlee order Heck to join the firing squad executing the deserter Private Eddie D. Slovik? Is he trying to teach him a lesson, or does he want to punish him for his cowardice? In what ways is it poetic justice for Heck to execute a solider for failing to do his duty? How does the experience affect Heck?

7. The sergeant overseeing the execution of Slovik tells the men who are to shoot him that “the responsibility for this decision lay with a higher authority, and this authority was not theirs to question. Theirs was to carry out orders to the best of their ability” [p. 159]. How does this statement echo the defense of Nazi war criminals like Adolf Eichmann who said that they were simply following orders? Under what circumstances should soldiers question or disobey orders?

8. The narrator tells us that after the execution, Heck returned to battle and found that he “had no fear–or at least he could very easily control himself in spite of it–and fought reasonably well until the end of the war. He didn’t understand this change, did not want to understand it, and took no pride in it” [p. 171]. How can this change be explained? Why doesn’t Heck want to understand it or take any pride in it?

9. After the execution, Heck “tried to move himself toward what had been in the mind of the man under the hood in the moment before he died, the moment when the last heartbeat was heard faintly in the doctor’s stethoscope. But he had no access to imagination and could conceive only emptiness” [p. 169]. What does the narrator mean when he says that Heck has “no access to imagination”? Is his lack of imagination a kind of moral failure? What is the value of Arvin’s ability to imagine both the experience of war and the consciousnesses of those who are thrust into it?

10. Albert tells Heck, “War makes thieves and liars of everyone. Dishonor is everywhere. People will do anything–loot a neighbor’s home, murder a grandmother–anything they can think of to help them live a day or two longer. And people are stupid. . . . One or two people are manageably stupid. A handful of people are, collectively, dumb as your average dog. A mob: stupid as an insect. Armies, nations: stupidest things on this earth” [p. 26]. Is this an accurate view of human beings and how they behave during wartime?

12. How might Heck’s life unfold after the novel ends? Is it likely that he will keep the baby? What effect might raising a child have on him? Why has Arvin chosen to end the novel in this way?

Nick Arvin studied mechanical engineering at the University of Michigan and Stanford and has worked in a variety of positions in automotive and forensic engineering. A graduate of the Iowa Writers’ Workshop and the recipient of the Michener Fellowship, he is the author of In the Electric Eden, a collection of short stories. He lives in Denver, Colorado.

After the War
Alice Adams

What’s to Become of the Boy?
Heinrich Boll

In the Time of the Butterflies
Julia Alvarez

A Thousand Rooms of Dream and Fear
Atiq Rahimi

It’s Not an All Night Fair
Pramoedya Ananta Toer

What It Takes to Be Human
Marilyn Bowering

By the Rule
Larry Heinemann

Diary of the Fall
Michel Laub

Song of the Forest
Colin Mackay