And Then They Stopped Talking to Me Reader’s Guide 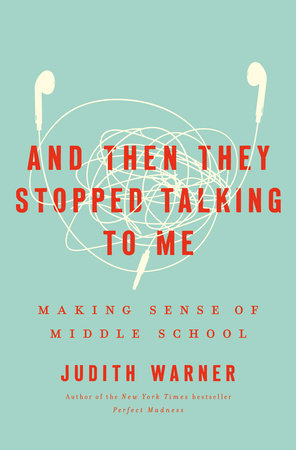 And Then They Stopped Talking to Me Reader’s Guide

print
And Then They Stopped Talking to Me Reader’s Guide

1. “Middle school is brutal.”; just about anyone will likely tell you “it was the worst time of their life.” How much does this tally with your own middle school or junior high experience or with that of any current or recent middle-schoolers in your life? Do you look back at yourself and see a “mean girl” (or boy), a “bully” or victim— or some combination of all the above? Or do you remember a basically happy period?

2. “People’s middle school stories . . . very often have a disproportionate impact on the narratives of self that they carry through adulthood.” Do you feel like you started to become who you now are during your middle school period? Why—and in what ways?

3. Judith Warner mentions fictional depictions of difficult or sensitive young adolescents past and present: Frankie in The Member of the Wedding, for example, or Kayla in the movie Eighth Grade. What other famous cultural portraits can you think of? Which ones, if any, have had an impact on you? Do those you encountered at a younger age have the same resonance for you today? And, in retrospect, are they more about kids, or about the adults who created them?

4. In 1904, the pioneering psychologist G. Stanley Hall popularized the notion of adolescence as a special and unique phase of life, describing it in part as a “kind of repressed insanity.” Do you agree? From your experience and reading of this book, what factors do you think are the most important in making this such a “crazy” period in life? How much of what we believe about middle schoolers is real and how much is myth?

5. At the beginning of the twentieth century, idealistic education reformers argued that twelve- to fourteen-year- olds were at an age of “exciting potential,” and that the grades that would soon come to be known as junior high school were the ideal time for these kids to use their “strengthened powers of judgment” to develop knowledge and personal virtue. Do these ideas ring true for you? If so, why hasn’t middle school ever lived up to its potential?

6. Perhaps most disappointing of all for idealistic educators was that junior high schoolers didn’t end up showing a penchant for “independent and original thinking,” and instead they “policed one another’s behavior.” According to Warner, what lies behind this conformist urge?

7. The book discusses research showing that the adolescent brain enters a “second critical period” of growth— heightened perception (caused by sex hormones) as well as a lopsided development with the growth of the amygdala (responsible for emotion) outpacing the frontal lobes (responsible for control and decision-making). Does this picture of a hypersensitive battle between emotion and reason tally with your own experience?

8. Would it have been helpful to have known about the science of the adolescent brain during your own middle school years? Would other insights this book contains have made a difference for you? Which ones? And why? And what are the takeaways you think are the most important now for parents, teachers, and schools?

10. In chapter 5, the book describes in detail how the “sexual revolution” produced a more sexualized world for 1970s adolescents, along with new and confusing “rules of engagement” that young teens tried to follow in an “adult world that was falling apart.” What were the effects on adolescents at that time and as the fallout continued in the 1980s? Now that those kids have grown up, do you think that memories of that time affect the way they parent their middle schoolers today?

11. The author notes that the early adolescent years have long been understood as a time of “non-stop self- monitoring,” during which we develop what the sociologist Charles Horton Cooley once called the “looking- glass self.” The psychologist David Elkind described it as “living life as a performance before an ‘imaginary audience’ of alternately jeering and cheering critics.” Does that tally with your own experience? Does this get better with age? Or do some people stay stuck in middle school all their lives?

12. Warner notes that, at least as far back as the 1930s, “popularity” was a junior high schooler obsession, and it looked very much like it still does today. “At the top of the heap were kids who were good-looking and had money. . . . At the bottom were those who were socially awkward or physically unattractive.” How much do you think the problems of middle school are the result of adolescents sorting themselves into a hierarchy? Are there any ways that schools could ameliorate this problem? Do you think the American practice of having schools exclusively for children aged twelve to fourteen make this problem worse?

13. Popularity “can be a risk factor for unhappiness.” From your reading and experience, would you say this is true? If so, how? Does it have to be?

14. “Today, though, it seems that it’s the kids who are often dragged along for the ride as they struggle to manage the crazy ups and downs of their middle school parents.” Warner depicts cases of parents who have become too involved in their children’s social lives—often taking sides or colluding with their children in disputes with others. From your reading and experience, what are the causes of this “boundary-slippage”? How can parents learn to recognize and limit it? Do you think schools can do anything to help?

15. Many parents say that other parents now are “competing through their kids,” making middle school parenthood feel like “seventh grade all over again.” Have you witnessed or experienced this? If so, what drives it? Do you think it’s worse in some schools than others—and is more prevalent among certain types of parents? What effects do think all this has on middle school kids?

16. “Better to let the school handle things.” Do you agree that parents should step back from the disputes their children are having with others in middle school, that “school business [is] school business”? In your opinion, are teachers and schools actually capable of handling that “business”?

17. What do you understand by the idea of parents “interviewing for pain” when discussing school with their children? Have you caught yourself doing this? Do you see others engaging in it? In what ways can parents “elevate, rather than lower, problematic conversations”? What benefits would this bring?

18. Warner describes a “winner-take-all society” that encourages ruthless “parenting to win,” arguing that toxic competitive attitudes are being passed on from adults to children—particularly among the upper-middle class. Do you agree? Has there been an accompanying diminishment of the “old-fashioned notion of [being] considerate to others”? What do you think might have caused these changes? Are there practical measures that could be taken to mitigate it among parents, within schools, and among kids?

19. Children’s mental health issues are left untreated for an average of “eight years before getting a proper diagnosis and starting treatment.” Are there ways that potentially damaging long-term problems could be better identified and even prevented in middle-school?

20. “Does a school really celebrate all sorts of students, even those the faculty doesn’t necessarily love?” How can schools live up to their own mottos and mission statements? How can teachers and administrators stand up to parents who might not get with the program?

21. When talking with a class of students, Warner tells a story about how she nursed a long-term resentment against a girl she felt had bullied her in middle school, but had completely forgotten—until she was in her 30s—that she herself had cruelly “dumped” two of her own eighth grade friends, concluding that, particularly where middle school is concerned, “things are not always as they seem.” Have you ever had a reality-shifting realization like this? Do you think sharing our own stories of adolescence—ones that show that our personal interpretations of events are often inaccurate—could help middle-schoolers “expand their thinking and feeling beyond the bounds of their own minds”? Why might this be valuable for them—and for us as adults?


Learn More About And Then They Stopped Talking to Me
print

5 Types of People Who Can Ruin Your Life
Bill Eddy

Dibs in Search of Self
Virginia M. Axline

The Wonder of Boys
Michael Gurian

The Power of Showing Up
Tina Payne Bryson and Daniel J. Siegel

If I Have to Tell You One More Time…
Amy McCready

The Me, Me, Me Epidemic
Amy McCready

Hold On to Your Kids
Gabor Maté, MD and Gordon Neufeld
Back to Top