The Monk of Mokha Reader’s Guide 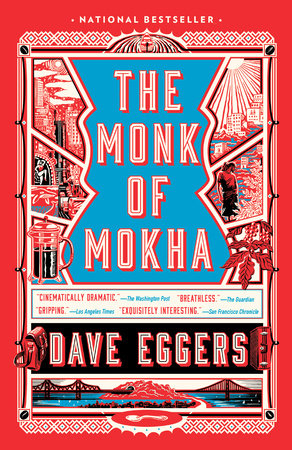 The Monk of Mokha Reader’s Guide

The questions, discussion topics, and reading list that follow are intended to enhance your reading group’s conversation about The Monk of Mokha, best-selling author Dave Eggers’s gripping narrative that weaves together the history of the coffee industry, the civil war in Yemen, and the immigrant experience in America, all told through the experiences of a young Yemeni American entrepreneur.

1. Discuss the Saul Bellow epigraph that opens The Monk of Mokha. How does this paragraph set the tone for Mokhtar’s story?

3. On pages 18–19, the reader learns that despite his general apathy toward school, Mokhtar loves books. Describe how Mokhtar’s “library” acts as a means of escape for him. How do books open up his worldview? How does his love of learning follow him throughout his life and shape his career?

4. In Book 1, the reader is introduced to the scenario wherein Mokhtar loses the satchel containing thousands of dollars and his brand-new laptop. Describe Mokhtar’s reaction to his folly. What fears does this stoke? How does this incident motivate him?

5. San Francisco is an economically divided city, where stratification of wealth is readily apparent. At what point in Mokhtar’s life does he begin to understand this economic divide? How do his first jobs—at Banana Republic, at the Honda dealership, and later at the Infinity—provide him with a lens to understand wealth and power in the United States? How does his exposure to wealth change his worldview or shift his understanding of his own economic possibilities?

6. Discuss the role of family in Mokhtar’s personal and professional life. What expectations are laid upon him as the son of Yemeni immigrants? What values do Mokhtar’s parents instill in him? How does his family aid him in his journey to create his business?

7. After landing his job at Banana Republic, Mokhtar begins to dress in what he and his friends call his “Rupert” look, and Eggers notes that “the effect of his appearance on the world was profound” (page 30). Discuss this transition. How did this change in appearance affect his self-esteem? How others in the world treated him? Relate this emphasis on physical appearance to how he presents himself as he is growing his business. How does a polished physical presentation help him to gain confidence in his business interactions? What identity is he trying to signal to the world?

8. Throughout The Monk of Mokha, the concept of code-switching is discussed, particularly in relation to Mokhtar’s status as both an American citizen and that of a Yemeni American. Discuss situations wherein he is deemed “not American enough” or “not Yemeni enough.” How is he forced to adapt his behavior based on his social setting? How does he contend with situations of injustice?

9. Discuss the development of Mokhtar’s business plan, from ideation to execution. What principles undergird his business? What business models does he admire? Who or what is most influential in helping to develop his business acumen? How does his understanding of the coffee industry evolve over the course of the narrative?

10. On page 75, Mokhtar is asked by Ghassan: “Are you a businessman or are you an activist? For now, at least, you have to pick one.” Does he? How does his interest in social justice affect his plans for business development? Discuss the mission of his business. How does his interest in honoring his Yemeni heritage add an extra pressure for him to succeed?

11. Discuss the colonialist roots of the coffee trade. How was the Yemeni culture robbed of its resource? Were you aware of this background?

12. In The Monk of Mokha, coffee is described as a “recession-proof” commodity, yet the process for entering the trade is one that is very difficult for outsiders. Discuss the challenges that Mokhtar faced as he learned the trade. How does he gain the trust of those in the industry, from the pickers to the distributors? How does his business model interrupt the standard practices within the industry?

13. Discuss the difference in atmosphere between Mokhtar’s first experience living in Yemen as a teenager and his travels there as an adult. How does his understanding of the country change as he matures? Discuss the effect of the civil war on Yemeni culture. How does Mokhtar navigate this environment? What advantages does he have as an American citizen?

14. In the last few chapters of The Monk of Mokha, as Mokhtar tries to escape Yemen, the reader is drawn into a fast-paced, gripping narrative of his escape. What was the most disturbing aspect of his experience? When do you think Mokhtar was most frightened for his well-being? How did he rely on his street smarts to help him to safety?

15. In the final scenes of the book, Eggers reveals himself as a “character” directly in the text. How would you describe Eggers’s narrative style throughout this book? If you have read other works by Eggers, how does this book compare to those books from a stylistic perspective?

16. Discuss the idea of the “American dream” and its cultural import in today’s world. How does Mokhtar’s story adhere to this narrative? How does his experience complicate the idea of what the American success story can look like? Consider the last chapters of the book. What was the defining moment of his success?

What Is the What by Dave Eggers
Uncommon Grounds: The History of Coffee and How It Transformed Our World by Mark Pendergrast
The Joy of Cof­fee by Corby Kummer
Coffee: A Dark History by Antony Wild
Javatrekker: Dispatches from the World of Fair Trade Coffee by Dean Cycon
From These Hands: A Journey Along the Coffee Trail by Steve McCurry
The Devil’s Cup: A History of the World According to Coffee by Stewart Lee Allen
Yemen Chronicle: An Anthropology of War and Mediation by Steven C. Caton
The Merchant Houses of Mocha: Trade & Architecture in an Indian Ocean Port by Nancy Um
Tribes and Politics in Yemen: A History of the Houthi Conflict by Marieke Brandt
Yemen: The Unknown Arabia by Tim Mackintosh-Smith
The Last Refuge: Yemen, al-Qaeda, and America’s War in Arabia by Gregory D. Johnsen
The Tenderloin: Sex, Crime, and Resistance in the heart of San Francisco by Randy Shaw
Learn More About The Monk of Mokha
print

The Art of Leaving
Ayelet Tsabari

The Complete Persepolis
Marjane Satrapi
Back to Top