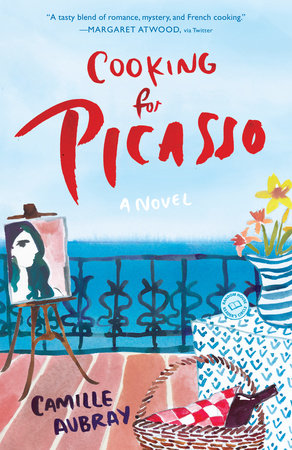 A CONVERSATION WITH CAMILLE AUBRAY

1. In the early chapters of Cooking for Picasso, long before we actually see Pablo Picasso, we hear a lot about him when the heroine Ondine talks to her parents. What does she observe later from his eating -habits, the letter he wrote to his friend in Paris, and the note he left for Ondine on the table? What do you remember most from that moment when Ondine actually meets Picasso for the first time?

2. When you learned of Picasso’s childhood through his eyes, did this change your view of him? What made him feel guilty about his ambition and dedication to his art? What is causing him the stress that made him stop painting?

3. How would you describe the different personalities of Ondine, -Julie and Céline? What are the roots of the family’s tensions? What legal and financial complications make it impossible for Céline to help her mother?

4. When Céline and her Aunt Matilda begin their cooking class in Mougins, what causes Céline to immediately get off on the wrong foot with Chef Gilby Hallliwell? Why is secrecy necessary for Céline’s quest? Why do Céline and Gil have trouble trusting each other? What draws them together in spite of their wariness?

5. Ondine’s life takes an unexpected turn just when she is getting more confident about Picasso. What were your feelings about Luc? Did you feel relief or apprehension about what impact he might have on Ondine’s life? Did you later feel that your instincts were correct?

6. Céline’s visit to a French lawyer results in a startling revelation about her Grandmother Ondine’s death. How does what Céline learns from Monsieur Clément change everything for her? And what does this revelation tell the reader about Ondine’s fate?

7. Try making a list of all the paintings mentioned in the novel and looking them up on the Internet. (The only fictional painting in the novel is Picasso’s portrait of Ondine called Girl–at–a–Window.) What do you feel about the artwork that Picasso produced during this mysterious interlude?

8. Discuss the impact of Ondine’s return to France on her daughter Julie. How does seeing familiar things and people feel different to the reader when we view it all through Julie’s eyes?

9. After the Second World War, Picasso comes back into Ondine’s life. What has happened to them both with the passage of time? How does this encounter strengthen Ondine’s resolve to do something to help Julie?

10. What makes Céline finally open up to her Aunt Matilda and bring her along to visit the fortune–telling neighbor Madame Sylvie? How did you feel about Madame Sylvie’s revelations?

11. How does Céline’s quest collide with Gil’s business problems? What makes her finally decide to take Gil into her confidence? Why is it now possible for them to begin to trust each other?

12. What gives Ondine the courage to seek out Picasso again after so many years? Do you think he planned to help her all along, or do you think he made a sudden decision to do so?

13. What do we learn about Céline’s father, Arthur, in the chapters when he was courting Céline’s mother, Julie? When Arthur and Julie come to visit Ondine years later, why does the birth of Céline impact Ondine so deeply? What significance can be found in Ondine’s dream about being visited by Picasso after his death?

14. What did you feel about the final revelation at the end of the novel? How does Gil help Céline understand its significance?

The Queen of Tuesday
Darin Strauss

I Give It to You
Valerie Martin
Back to Top