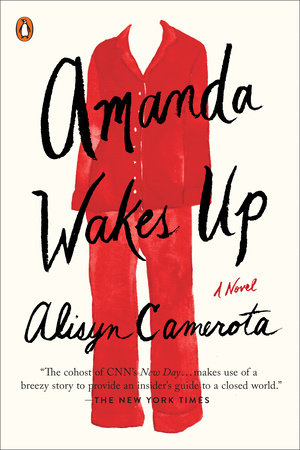 1. Amanda Wakes Up is about a local news journalist who lands her dream job coanchoring a national morning show on cable television. Alisyn Camerota is a CNN anchor, and was a reporter and anchor for many years at FOX News, so she writes Amanda from experience. What surprised you about her depiction of a newsroom?

2. Amanda is ambitious and determined, but also terrified when she has the opportunity to go on Wake Up, USA! In your own life, have you encountered a moment when you felt your dreams might come true? How did you react?

3. Many of the events in this novel feel eerily similar to the 2016 United States presidential election. Why do you think Alisyn Camerota chose to set her story during this era in journalism, rather than a steadier time?

4. Charlie puts pressure on Amanda to challenge presidential-hopeful Victor Fluke, even suggesting she “take him down by Election Day.” Amanda is adamant that her role is to tell the story, not influence the outcome. Do you agree?

5. The media fell under a lot of pressure following the 2016 U.S. presidential election with accusations of “fake news.” How do you see this theme explored in Amanda Wakes Up? Does reading the novel change your experience of watching television news?

6. There have been a lot of stories about sexual harassment in the media. Through movements like #MeToo and #PressForward, people are pushing for change and equality in the workplace. Do you see these dynamics in play in Amanda Wakes Up? If so, how well do you think Amanda navigates them?

7. Why do you think Amanda leaves Charlie for Rob? What does she find appealing about Rob, aside from his good looks?

8. In the novel, Amanda often finds herself having to reconcile the rules of journalism with real-life experiences where those rules don’t apply. Have you ever been in a situation that required you to break the rules? What did you do?

9. Amanda Wakes Up can be looked at as a book about how when dreams come true, they often don’t look the way we imagined. Have you ever experienced this? How did it feel?

10. When Amanda attends the White House Halloween party, she goes as half of a Rubik’s Cube. If you received an invitation, what would you wear?

11. At the end of the novel, we find out that Laurie has aired the story on BNN and exposed Martina against her wishes. What do you think about Laurie’s argument that the story comes before the source? Was Amanda right not to air the video on Wake Up, USA?