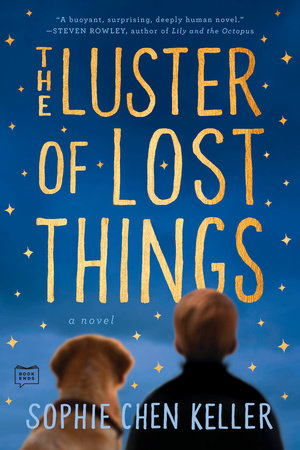 1. How does Walter’s inability to speak shape his character? In what ways does his speech change throughout the novel?
2. Did you have a favorite character? If so, who?
3. Lan tells Walter to make a “sunflower seed friend” (p. 104). What does she mean? Does his understanding of friendship change over the course of the book? And does he ultimately make a sunflower seed friend? Do you have any sunflower seed friends?
4. Walter’s ability to find missing items allows him to glimpse inside the lives of others without feeling vulnerable. Have you ever helped someone find a lost thing? Is there an item you personally remember losing? What did this item say about you? Did you find it?
5. Walter lights an oil lamp every day in the hope his father will find his way home. At the beginning of the novel, did you think Walter would find his father? What does Walter end up finding?
6. The Lavenders is a beloved bakery, but the rising rents in the neighborhood threaten it. How does the novel portray gentrification? Have you seen this in your own community? What do you think about the landlord’s decision to close The Lavenders?
7. How does Walter deal with being picked on at school? How does his attitude toward Beaver and Todd change by the end of the novel? Were you surprised by the way Walter treats them later in the book?
8. Many of the characters Walter encounters in his journey are lonely—the rat-man and rat-woman long for a child, Karl misses his wife, and Junker wanders the streets of his abandoned city, searching for company. How does Walter help the people he meets? What does he learn about loneliness?
9. Ruby gives Walter the “first gift [he has] been given from someone who is not Lucy” (p. 275). What does Ruby show Walter about the world? How does her friendship change him? Do you recall the first gift you received that came from a friend?
10. Much of this novel is about the power of stories to shape our lives. In what ways does the Book shape Walter? How does he come into his own story? Were there stories you encountered as a child that have shaped you?
11. What is the kindest thing you’ve done for someone else, or that someone else has done for you? Do you wish you had been kinder on some occasions?


Learn More About The Luster of Lost Things
print

The Dangers of Smoking in Bed
Mariana Enriquez

Talk to Me
John Kenney

How to Talk to a Widower
Jonathan Tropper

Orchid and the Wasp
Caoilinn Hughes
Back to Top