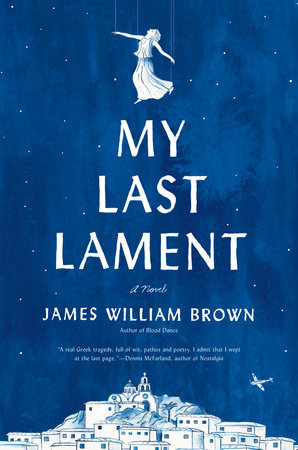 1. Who do you think Aliki loved more, Stelios or Takis? Do you think the nature of her love for them was different? How? Do you think Takis had a romantic love for her, or something else?

3. Why do you think Aliki took Takis with her for so long? Do you think she was right to cut ties with him finally?

5. What is the relationship between laments and shadow theater performances? What do each of them tell us about our lives?

6. What is a lament? How has your understanding of it changed by reading the novel?

7. Does it surprise you that, as an old woman, Aliki has such an irreverent voice? What does that say to you about Greek culture?

8. Near the end of the novel, Aliki says, “A record of a life nearly complete could also be said to be a lament for that life, couldn’t it?” Do you agree with her? Why or why not?

9. Do you think it’s intrinsic to the Greek character to believe that each of our lives is a story being told? Or do you think that’s part of a wider literary tradition?

10. Do you think the old women who go with Aliki to funerals and other gatherings are meant to function like the chorus in a classic Greek play? In what ways do they do that? In what ways are they different?

11. Many details of Greek life in a small village come out in this novel—the food, the idea of living off the land, the village songs, the pragmatic attitude and stubborn humor with which villagers face their lives. Did you see these attributes as typical of Greeks and Greek culture? Or did this representation change your understanding of what Greece is like?

12. Do you think what happened to Greece after World War II is related to its current economic standing in the eurozone? How do you think the struggle between communism and fascism has affected Greece today? Some critics blame a culture of government corruption for being behind Greece’s fiscal problems. Do you think that’s true, and does it have roots in what happened after the war?

After The War
Richard Marius

Man in the Box
Thomas Moran

The Time In Between
David Bergen

Be My Wolff
Emma Richler

The Disorder of Longing
Natasha Bauman
Back to Top