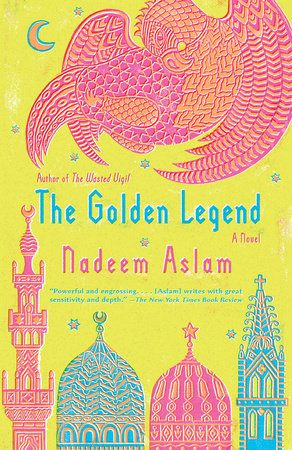 The questions, discussion topics, and reading list that follow are intended to enhance your reading group’s conversation about The Golden Legend, the searingly beautiful new novel from Nadeem Aslam, acclaimed author of The Blind Man’s Garden.

1. Disguise and deception are central themes of The Golden Legend. Discuss the ways in which the novel’s characters deceive those around them. Why do they feel the need to keep secrets? What are the consequences of their deception?

2. The Hanged Mutineer’s tree is the last almond tree in Badami Bagh. It grows in Helen and Lily’s courtyard, but it is burned down in the violent aftermath of the announcement from the minaret revealing Lily and Aysha’s relationship. Examine the symbolism of this tree. How did it get its name?

4. What is the Hagia Sophia? What is the Córdoba Mosque? Why might Nargis and Massud have chosen to hang models of these religious structures from their ceiling? Why does Helen find the models so comforting?

5. Explore the relationship among religion, power, and freedom as it is depicted in The Golden Legend.

6. Who was Massud’s brother? How did he die? Why does Nargis evoke his memory when Major Burhan visits her house for the first time?

7. Analyze the relationship between the United States and Pakistan as it is portrayed in the novel. How are the tensions between the two nations evident in the aftermath of Massud’s death? How does the military-intelligence agency contribute to this dynamic?

8. Discuss Imran’s past. Where did he grow up, and what was the political situation like there? Why did he decide to join the training camp, and what made him leave? How does his previous involvement with this militant group continue to affect his life today?

9. The mosque on the island in the Vela River becomes a safe haven for Nargis, Helen and Imran as they try to evade capture by the police. Describe the mosque and the landscape around it. Why is the mosque now in disuse? In what ways does it represent the Pakistan that Nargis and Massud, who designed it, hoped for?

10. Discuss the bond that forms between Helen and Imran. What do they have in common? Why do you think they develop such an intense connection?

11. Compare and contrast Nargis’s life before and after she decides to live as a Muslim. What does she gain? What does she lose? Do you think she regrets her decision?

12. Explore the motif of flowers in the novel. When and where do flowers appear? What does their appearance suggest about the endurance of beauty?

13. Describe the novel’s treatment of radical Islam. Which characters are connected to extremism? How do their beliefs and actions impact both Christian and Muslim members of the community? What motivates them? What does the novel suggest about the lengths to which extremist movements will go?

15. Why does Bishop Solomon commit suicide in a courtroom? What might his suicide represent to the Christian citizens of Pakistan?

16. Ghosts are ever present throughout the novel. In what sense is Badami Bagh, as well as the people who live there, haunted by the past?

17. Discuss the conclusion of the novel. What happens to Helen and Imran? To Lily and Aysha? To Nargis? Is the tone of the ending hopeful or despairing? What do the final pages suggest about the future of Pakistan and the possibility of justice?

I’ll Be Right There
Kyung-Sook Shin

I Am China
Xiaolu Guo

As Sweet As Honey
Indira Ganesan

The Red Chamber
Pauline A. Chen
Back to Top