The Maze at Windermere Reader’s Guide 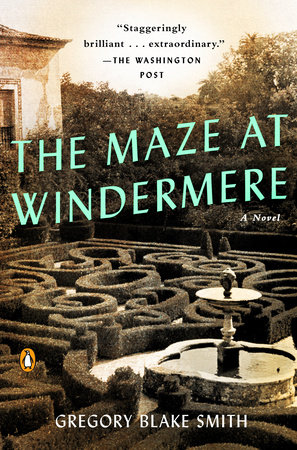 The Maze at Windermere Reader’s Guide

I have read somewhere that curators of antiquities have discovered that oftentimes parchments of the Dark Ages have underneath their present writing an older writing incompletely effaced, and that by careful investigation, the older writing can be read beneath the newer. Such a layering of writing is called . . . a palimpsest. Ah, to be able to read both the surface and that which is below the surface! (pages 69–70)

The Maze at Windermere takes us on a dazzling narrative odyssey across five intersecting stories, each set at a distinctive moment in the history of the renowned seaside town of Newport, Rhode Island.

In 2011, handsome and easygoing tennis pro Sandy Alison is surprised to find himself falling for Alice du Pont, heiress to the legendary Newport mansion known as Windermere. Alice does not look like the women to whom Sandy is usually drawn, and Sandy is forced to examine what his motives are in pursuing Alice. Does he love her, or the world that she is attached to? More than a century earlier, in 1896, a closeted gay man with nothing but a sharp wit and impeccable taste schemes to secure a life of comfort and luxury by marrying the wealthy widow who owns Windermere. In 1863, young Henry James, soon to make his mark on the world, discovers his muse in Alice Taylor and strikes up a friendship with her. His attentions, however, are misinterpreted as romantic pursuit, and James must make a decision about what he is willing to sacrifice for his art. In the midst of the Revolutionary War in 1778, an aristocratic British officer stationed in Newport is consumed by his desire to seduce—at whatever cost—a young Jewish woman. Finally, in 1692, an orphaned Quaker girl looks to find a path forward for herself, and the slave she has inherited, without losing her chance at love and happiness.

Beautifully written and unforgettable, these five interwoven stories reflect and refract one another, demonstrating both the ever-changing landscape of Newport across history and the enduring landscape of the human heart in all its love, ambition, and duplicity.

1. At one point in the novel Alice du Pont tells Sandy Alison that in France there’s “. . . a crime called abus de faiblesse. Which is exploiting someone’s frailty or weakness for your own gain. A kind of killer instinct” (page 60). Who is doing the exploiting in this novel, and who is being exploited?

2. In one of their early conversations Sandy and Aisha discuss money and motive: “When that kind of money was involved, that kind of privilege . . . could anybody really be sure of their motives?” (page 90). Do you agree with the idea that one’s motives can be obscure even to oneself? Beyond their stated motives, what do you think each main character—Sandy Alison, Franklin Drexel, Henry James, Major Ballard, and Prudence Selwyn—truly desires?

3. Major Ballard writes that he sometimes feels “as if I am standing outside the World and looking in, as if I am on the Edge of the world’s Orchard and I can see the Fruit hanging on the trees but am denied them” (page 116). Other characters in the novel share this experience of feeling that they don’t quite belong. Major Ballard’s impulse is a determination to “eat of the fruit of that Orchard, violently if that was what it took” (page 117). How do other characters respond to their experience of being on the margins of their world?

4. Certain phrases, themes, and places surface and resurface across the different eras in this novel. Did you notice any in particular? What is their significance? And, in general, what do you make of the way in which “. . . the rich past underlies the present” (page 69) in The Maze at Windermere?

5. Sandy takes Margo at her word when she offers to write him a recommendation. When Alice hears of this she laughs, surprised by his innocence, and tells him he should pass on it. “You don’t see it because it’s not inside you and so you don’t recognize it in others” (page 198). Is this an accurate assessment of Sandy? Is Sandy as innocent as others believe him to be? As he believes himself to be?

6. In part three the structure of the novel shifts, and we begin to switch more rapidly and fluidly between narrators. What is the purpose and effect of this?

7. As the author says in his Q&A, in each of the novel’s eras we are confronted with similar questions of culpability: Is Franklin Drexel’s scheme to marry a rich woman he can never love excusable because he lives in a world that has no place for him as a gay man? Should Henry James have seen sooner that his attentions to Alice Taylor might be misinterpreted? And is even the despicable Major Ballard redeemed by his beginning to love the young woman he had only meant to seduce?

8. There is some uncertainty as to what path some of the characters will choose to take as the novel draws to a close. Indeed, the author seems to be encouraging the reader to “step off the chessboard” of the novel and imagine how those paths will unfold. What do you see the future holding for each character?

9. And finally, consider the maze motif in the novel. In what ways do the characters find themselves in figurative mazes? Does the reader find him- or herself in a maze as well?

Learn More About The Maze at Windermere
print

Dreaming in Cuban
Cristina García
Back to Top