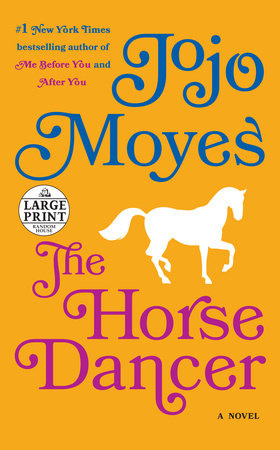 “‘It’s about trying to achieve the perfect communication. And a little movement of your finger on a rein or a tiny adjustment of weight might do that. It’s different every time because he might be in a mood or I might be tired, or the ground might be softer. It’s not just technical—it’s about two minds, two hearts . . . trying to find a balance. It’s about what passes between you’” (p. 184).

The year is 1960. Elite equestrian Henri Lachapelle is about to enter the arena to prove to all of France that he is still destined to become one of Le Cadre Noir’s top riders. But Henri’s rival, Picart, undermines his courage and sabotages what was meant to be his showstopping performance.

Fifty years later, in a nearly forgotten corner of London, Henri and his granddaughter Sarah pay what they can to a salty American expat named Cowboy John—who’s barely keeping the stable out of the hands of the local villains—to board their magnificent horse, Boo. Henri teaches Boo and Sarah how to defy gravity as he did in France so many years ago and dreams that one day Sarah will be able to live the life he couldn’t—as an écuyer at Le Cadre Noir.

In what seems a world away, Natasha Macauley rides a bursting London train to her busy law firm. In the midst of wondering what to do about her charming ex-husband, she reads on someone else’s newspaper that one of the children she defended in court has committed a violent crime. Also on that train ride, she swears she saw a horse, rearing gracefully while a little girl commanded him from the ground. . . .

The Horse Dancer connects the lives of Sarah and Natasha in an enchanting and deeply romantic tale about the grace and beauty of second chances.

1. Sarah and Natasha come from different classes. The problems they face may vary, but both are struggling to act nobly. Is it harder to do the right thing from a lower-class or upper-class position? How does this book confirm or disprove that?

2. How do you think Sarah’s life would be different if she would have listened to her headmaster and concentrated on her studies instead of Boo? Some people would say that formal education is the most crucial part of an adolescent’s life. How is that true for Sarah?

3. When Sarah is trying to convince Thom to take her and Boo to France, she says “It was as if he could see everything, her dishonesty, her vulnerability, not in the way Maltese Sal had, as if he was stripping away every bit of her that was worth something, but with a kind of sympathy. It was worse” (p. 342). Why, for Sarah, is having Thom see her cry worse than her encounter with Maltese Sal?

4. When Sarah is talking to Thom about Le Cadre Noir she says, “Papa always said that when he came to Le Cadre Noir it was the first time in his life he had felt understood. Like there were just a few other people in the world who spoke his language and all of them lived in that one place” (p. 353). Is there a place for you that is like this? If there is, describe it. If there isn’t, describe what it would be like.

6. What was your reaction to the formal and disciplined way that Henri raised Sarah? In what ways did this type of upbringing help her? In what ways may it have hindered her?

7. At one point Sarah says “You know like I do that sometimes telling the truth makes things worse, not better” (p. 430). Do you find this to be accurate? How has it been true for the characters in this book? How has it not been true?

Jojo Moyes is the #1 New York Times bestselling author of After You, Me Before You, One Plus One, The Girl You Left Behind, The Last Letter from Your Lover, Silver Bay, The Ship of Brides, and Paris for One and Other Stories. She lives with her husband and three children in Essex, England.
Learn More About The Horse Dancer
print
Back to Top