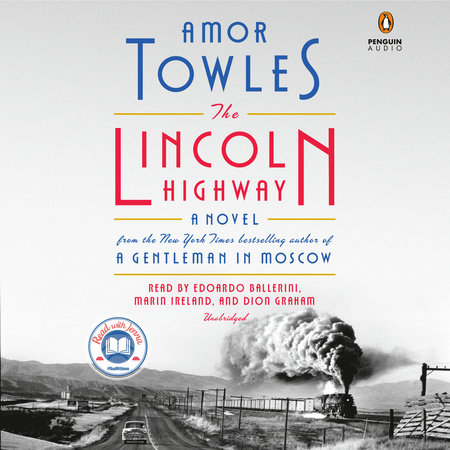 If you have come to this Readers Guide because you have read The Lincoln Highway, I owe you my heartfelt thanks. I hope you enjoyed the book.

Over fifteen years ago, three friends and I formed a reading group. Ever since, we have met in some New York City restaurant once a month in order to discuss a novel in detail. Below, I have posed some questions of the sort that might have surfaced in one of our discussions.

For those interested in learning more about The Lincoln Highway’s background or my process, I encourage you to visit amortowles.com, where I have placed a variety of supporting materials. In particular, you may be interested in my Q&A, which anticipates some likely questions. On the site’s contact page, you may also submit your thoughts and questions, or register to receive occasional news of my writing.

In June 1954, eighteen-year-old Emmett Watson is driven home to Nebraska by the warden of the juvenile work farm where he has just served fifteen months for involuntary manslaughter. His mother long gone, his father recently deceased, and the family farm foreclosed upon by the bank, Emmett’s intention is to pick up his eight-year-old brother, Billy, and head to California, where they can start their lives anew.

But when the warden drives away, Emmett discovers that two friends from the work farm—the wily, charismatic Duchess and earnest, offbeat Woolly—have stowed away in the trunk of the warden’s car. Together, they have hatched an altogether different plan for Emmett’s future, one that will take the four of them on a fateful journey in the opposite direction—to the city of New York.

Spanning ten days and told from multiple points of view, Towles’s third novel is a multilayered tale of misadventure and self-discovery, populated by an eclectic cast of characters, from drifters who make their home riding the rails to larger-than-life vaudevillians to the aristocrats of the Upper East Side. An absorbing, exhilarating ride, The Lincoln Highway is a novel as vivid, sweeping, and moving as readers have come to expect from Towles’s work.

1. How do you think Emmett, Duchess, and Woolly’s various upbringings—particularly their relationships to their parents—have shaped them? How have their parents’ choices influenced their own desires and ambitions? When you were eighteen, which aspects of your parents’ lives did you hope to emulate, and which did you hope to cast aside?

2. Early in the novel, Emmett meets Sister Agnes, a nun who describes the faith of children who look upon a miracle “with awe and wonder, yes, but without disbelief.” From the context, it’s fairly clear that Sister Agnes is referencing Billy in her remark. How would you describe Billy’s personality? While he is the youngest and least experienced character in the novel, one could argue that he has the greatest influence on the other characters. What is it about Billy that makes this so?

3. Throughout the novel, an array of stories is recalled—stories drawn from Professor Abernathe’s Compendium, from the vaudevillian world of Duchess’s father, from Shakespeare and the cinema. What role do stories play in the shaping of the different characters’ lives and personalities? Are these stories a productive or counterproductive force? What story—whether handed down to you from your parents or experienced in a novel or film—had a particularly strong influence on shaping you as a young person?

4. The novel takes places in the mid-1950s—a period of peace, prosperity, and upward mobility in the United States; a period in which television was in its infancy, and which came just before the advents of rock ’n’ roll, the modern civil rights movement, and the “sexual revolution.” How does the era shape the journeys of the characters, if at all? What aspects of their journey are unique to their times; what aspects were shared by you when you were on the verge of adulthood?

5. Hilary—an old friend and member of my book group—observed to me in passing, Well, of course money is one of the central themes of your book. It’s on the minds of all the characters. This hadn’t occurred to me for one second! Do you think Hilary is right? On a related note, discuss the broader theme in the novel of moral accounting: of debt and recompense, transgression and atonement, sin and redemption.

6. The city of New York is a thousand cities rolled into one. How does New York differ in the eyes of Emmett, Duchess, Woolly, and Billy?

7. One of the pleasures of writing fiction is discovering upon completion of a project that some thread of imagery has run through the work without your complete awareness–forming, in essence, an unintentional motif. While I was very conscious of the recurrence of “Maps and Floor Plans” in the book, and “Special Photographs,” here are a few motifs that I only recognized after the fact: “Timepieces,” such as Billy’s surplus watch, the two grandfather clocks, Marceline’s watch, and Wallace’s officer’s watch; “Tables, Desks, and Chairs,” such as the furniture in the doll case at FAO Schwarz, the long table in the dining room at the camp, and the desks of “Dennis” and Professor Abernathe; “Unusual Cases,” such as the wicker picnic basket, Woolly’s cigar box, Harry Hewett’s Othello case, and the shoebox of preserves. What role do any of these motifs play in the thematic composition of the book? And if you see me in an airport, can you explain them to me?

9. Emmett’s father leaves Emmett a quotation from Ralph Waldo Emerson’s essay “Self-Reliance” as part of his legacy. Do you agree with Emerson’s argument that what is within the individual is new to nature, and that we have no idea of what we can achieve until we’ve tried? What about Emerson’s idea strikes you as particularly American? What about this novel strikes you as particularly American? What does self-reliance mean to Emmett, to Duchess, and to Sally?

10. There are a number of smaller legacies in the novel. In addition to the Emerson quotation left to Emmett, there are the recipes handed down to Sally, the officer’s watch handed down in the Wolcott family, the St. Christopher medal passed from Billy to Ulysses. What role do these small legacies play within the larger themes of the novel? What smaller legacy have you received that has meant a great deal to you?

11. How would you describe each main character’s transformation over the course of the novel? Which character do you think evolves most significantly? Which characters, in your opinion, found what they were looking for? Do you have a favorite character, and why them?

12. A question for those of you who have read my other books: While Rules of Civility covers a year in Katey’s life, and A Gentleman in Moscow spans three decades, The Lincoln Highway takes place over just ten days. How does the span of time effect the narrative and your experience of it? What are the benefits and limitations that come with reading a novel spanning days rather than years? While A Gentleman in Moscow and The Lincoln Highway differ in duration, the ending of the two books match each other in a very specific way. What is this commonality? And what are its implications when considering the two stories side by side?

13. Woolly’s sister, Sarah, observes to Emmett: “If you take a trait that by all appearances is a merit—a trait that is praised by pastors and poets, a trait that we have come to admire in our friends and hope to foster in our children—and you give it to some poor soul in abundance, it will almost certainly prove an obstacle to their happiness.” Do you think this is true? What virtue do you think each of the main characters possesses in excess?

14. Given inflation, $50,000 in 1954 would be the equivalent of about $500,000 today. Late in your discussion, after you’ve had the chance to share a bottle of wine or a few cocktails, tell each other what you would do if you were suddenly given half a million dollars.

Amor Towles is the author of the New York Times bestsellers Rules of Civility and A Gentleman in Moscow. The two novels have collectively sold more than four million copies and have been translated into more than thirty languages. Towles lives in Manhattan with his wife and two children.
Learn More About The Lincoln Highway
print

The Vanishing Half
Back to Top