Who Slays the Wicked Reader’s Guide 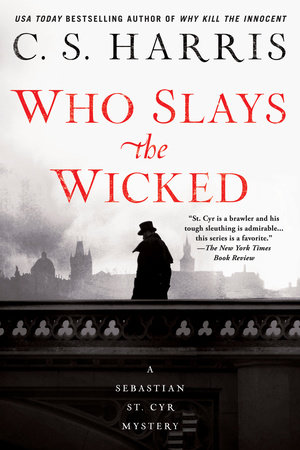 Who Slays the Wicked Reader’s Guide

Who Slays the Wicked
C.S. Harris
Questions for Discussion

1. What do Sebastian St. Cyr’s background as a cavalry captain and his friendship with Irish surgeon Paul Gibson tell us about the Viscount?

2. Sebastian’s hunt for Ashworth’s killer takes place against the background of the ending of the Napoléonic Wars and the Allied Sovereigns’ visit to London. How do these historical events play a part in the story?

3. What do the hardships faced by the Earl’s granddaughter Stephanie, the shopkeeper’s assistant Giselle Blanchette, child prostitute Sissy Jordan, and housemaid Jenny Crutcher tell us about the legal position of women in early nineteenth-century Britain?

4. Who Slays the Wicked reveals fascinating details about the behind-the-scenes workings of Regency London’s sanitation. Discuss.

5. Young Welsh architect Russell Firth is a brilliant but lowborn man trying to get ahead in Regency Britain. What does his life—and the challenges he faces—tell us about the times? About the character?

6. Nineteenth-century shopkeepers and tradesmen like Lawrence McCay had little hope of redress when cheated by wealthy, powerful men like Lord Ashworth. How have things changed? How are things still the same?

7. The title of this book, Who Slays the Wicked, comes from a biblical verse. How does it resonate with the killing of Lord Ashworth? Why do you think the author chose it?

8. Sebastian’s nemesis Charles, Lord Jarvis, is the King’s ruthless, powerful cousin and Hero’s father. How does that impact Sebastian’s quest to catch this killer?

9. Many people in this book are hiding dangerous secrets. How do their secrets—and their reasons for keeping them—differ? How are they the same?

10. The opulent lifestyles of wealthy royals and aristocrats such as the Prince Regent and the Marquis of Lindley stand in stark contrast to the wretched poverty of crossing sweeps Waldo Jones and Ben King, child prostitute Sissy Jordan, and pure finder Gussie Spilsby. Discuss.

11. Who do you think killed Sir Felix Paige? Why?
Learn More About Who Slays the Wicked
print

Death in Kew Gardens
Jennifer Ashley
Back to Top