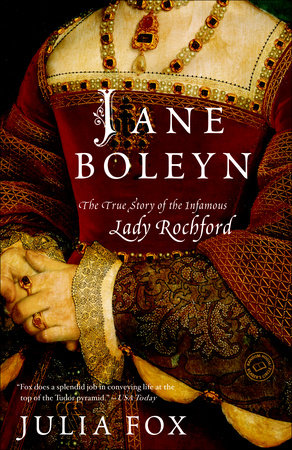 2. Although no one during Jane’s lifetime suggested she gave the fatal evidence that condemned Anne and George Boleyn—and handwritten originals of sixteenth-century sources prove that she did not do so—the idea that she betrayed them has crept into popular culture and has persisted. One of Fox’s aims was to question this mistaken idea by tracing this belief back through the centuries to its origin in Elizabeth’s reign. Did you find the research Fox outlined in her Epiloguen convincing?

3. Fox’s book is based on her study of Tudor documents in their original form. She says that some of her most thrilling moments while researching Jane Boleyn came from holding in her hand documents that had once been, almost five hundred years ago, in the hands of Henry VIII,Wolsey, the Boleyns, and Jane herself.What aspect of historical research do you think you would find the most thrilling?

4. One of Fox’s finds was a previously forgotten document in an English country record office that lists the terms of Jane’s marriage settlement. It reflects the trouble that she had prying a satisfactory income from her in-laws should her husband die.What light do you feel this sheds on Jane’s conduct when George was arrested?

5. One problem facing Fox was that she could not prove that Jane was present at certain events, even if she felt sure of it in her own mind, because the names of only the most important figures there were recorded. This meant that the author used such stratagems as “probably” or “most likely.” Do you think that she was right to be such a stickler for accuracy or do you feel that she should have been more willing to commit herself?

6. Do you feel that Fox’s explanation of how Jane Boleyn became involved in Catherine Howard’s escapades rings true? Can you suggest any other explanation?

7. Did you have any sympathy for Anne Boleyn as she faced the executioner’s sword that May morning in 1536, or with Catherine Howard as she picked her way across the icy cobbles of the Tower to meet a similar death a few years later? Did you feel that, within the context of their time, either deserved her fate?

8. What light do you think the book sheds on the role of women within the prevailing culture of Henry VIII’s England?

9. When Henry VIII became king he was a handsome, generous, and talented youth. By the time he died, Fox believes, he had become a monster with little regard for the law or for human life. Do you feel that she has painted too dark a picture of Henry?

10. The Tudors are perennially popular subjects for films, TV series, and historical fiction. Do you think that this blurring of fact and fiction is good or bad for understanding history?

Atlas of the Heart
Brené Brown
Back to Top