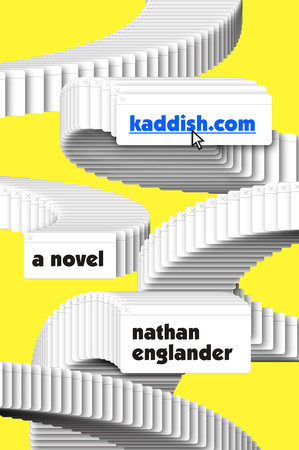 The questions, discussion topics, and reading list that follow are intended to enhance your reading group’s conversation about kaddish.com, the brilliant new novel from Nathan Englander, author of Dinner at the Center of the Earth and The Ministry of Special Cases.

2. While Larry is staying at his sister’s house for his father’s shiva, he decides to watch pornography on his laptop and immediately feels guilty. He is haunted by the image of a particular actress in one of the videos for years to come. To what do you attribute this woman’s staying power in Larry’s conscience? What does she come to represent to him?

3. When Larry looks at the photo of Chemi, he thinks to himself, “See how this young man, alone in the beit midrash, struggles to assimilate some Talmudic idea” (44). Shortly after, he begins to weep, and he later identifies this moment as the one in which he chose to return to Judaism. Why does Chemi’s photograph have such a profound effect on Larry? Why is his choice of the word “assimilate” significant?

4. Consider Larry’s decision to take on Shuli as his new name. What does this name symbolize to him? Is it his intention to leave his life as Larry behind forever? Is he successful? Why or why not?

5. Explore the novel’s depiction of the interplay between technology and religion (Judaism, in particular). Are the two at odds with one another? Has Judaism been, in any way, enriched by technology?

6. Why is Shuli so affected by the news of Gavriel’s father’s death—and by the boy’s refusal to say Kaddish at school? To what extent does he identify with Gavriel? Why does this boy’s story inspire Shuli to try and make contact with Chemi?

7. Compare and contrast Shuli and Miri’s observance of Jewish law. How does Miri make sense of Chemi’s guilt? His past? Does she agree that Shuli’s search for Chemi is justified? To what do you attribute any key differences in their understanding?

8. What does the Internet represent to Shuli? Why is it simultaneously so alluring and so repulsive to him? As you answer this question, consider Shuli’s beliefs about where knowledge comes from.

9. Explore the dream Shuli has about his father in the hotel in Jerusalem. How do you interpret the absence of each man’s elbows? How does this dream deepen our understanding of Shuli’s connection to his father? Of his sense of guilt?

10. On page 151, Englander alludes to the biblical narrative of Jacob’s ladder: “Reb Shuli lies down, with a bag under his head for a pillow, better off than Jacob and his stones.” He again references this story on page 176, writing, “Shuli knows just when to turn and when to go straight, when to climb or descend a staircase.”  In what ways is this allusion significant?

11. Examine the dream Shuli has after he discovers the truth about Chemi. Which rituals does he perform at the beginning of the dream, and what do they signify? Who appears to him in the dream? How does each person present himself or herself, and how would you characterize the interactions Shuli has with each of them? What is the Heavenly Tribunal, and why does Shuli suspect that the three individuals he encounters constitute the Tribunal? How do you interpret the conclusion of this dream sequence?

12. Why do you think Shuli decides to spend the last of his money on an elaborate Kiddush cup for Gavriel? What does he hope to communicate with this gift? Do you think his message will come across to Gavriel? Why or why not?

13. Discuss Shuli’s decision to remain in Israel and say Kaddish for all of the people for whom Chemi neglected to do so. Do you think Miri will agree to move there with him, or has their marriage reached a breaking point?  Is this the ending you expected? Why or why not?

Learn More About kaddish.com
print
Back to Top