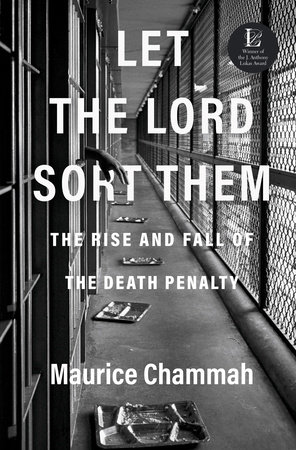 1. What was your experience reading Let the Lord Sort Them? Was there anything you learned that surprised you? If so, what? Which scenes or stories did you find emotionally resonant or overwhelming, and why?

2. Whose perspectives are often left out of media coverage and public discussions of death penalty cases? What is the importance of including them?

3. How does race play a role in death penalty rulings? What does the fact that black people are overrepresented on death rows across the United States say about our country? What steps can be taken to resolve this disparity?

4. In the prologue, Maurice Chammah writes that the focus of this book is lawyers, since they “help us answer some of our deepest questions about our own society: Can a person be evil? What does ‘justice’ mean?” (19). What are your thoughts on this focus and these questions?

5. Do you agree that justice should be “local”: determined by state legislatures, and then handled by local prosecutors and juries? Should someone receive or avoid the death penalty based on what county or state they committed the crime in? If so, why? If not, what would be a better system?

6. In Chapter Two, Chammah walks readers through the Supreme Court’s decision to approve the Texas death penalty law, which directed juries to decide whether defendants would be dangerous in the future. Did the court make the right ruling? Please explain.

8. What do you make of Eddie Capetillo? Do you think he could be called “rehabilitated” or “redeemed” after his years on death row? Should the fact that he was seventeen years old at the time of the murders have been taken into account by the courts?

9. If you had been in Elsa Alcala’s shoes, would you have sought a death sentence for Eddie Capetillo? Explain your decision.

10. Should those who commit murder as a hate crime—like the perpetrators in the case of James Byrd, Jr., in Jasper, Texas—receive harsher punishments than others who commit murder? Why or why not?

11. Should the cost of the death penalty dictate whether someone receives the sentence? Why or why not?

12. If you had been a juror in the trial of Juan Quintero, what would you have brought up in the jury room? Is Quintero’s crime, murdering a police officer, “all you need to know about him” (242), or is there more to the story?

13. Do you have a different view of the death penalty than you did twenty or thirty years ago? From when you started reading Let the Lord Sort Them? If so, how have your views changed?

Learn More About Let the Lord Sort Them
print

We Own This City
Justin Fenton

Hell in the Heartland
Jax Miller

For the People
Larry Krasner