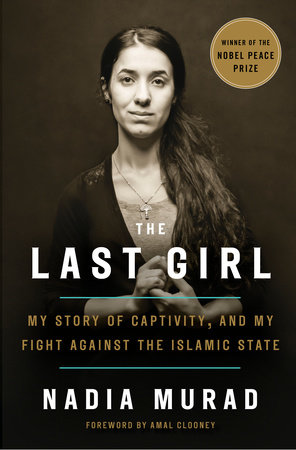 Important Terms:
Mukhtar-A village leader
Peshmerga-Kurdish fighters
Qawwals-Yazidi traveling religious teachers
Jevat-Meeting house used by the Mukhtar and other men to make decisions for the village
Kochek-A Yazidi mystic that confirms if a deceased person made it into the afterlife.
Lalish-A valley in northern Iraq where the Yazidi’s holiest temples are located.
PKK-(Kurdish Workers Party) Kurdish guerrilla army based in Turkey
KDP-President Barzani’s Kurdish Party
Sabaya-ISIS’ human spoils of war bought and sold as sex slaves

1. How would you describe Nadia’s life in Kocho before ISIS invades?

2. How would you characterize relations between Yazidis and their Sunni neighbors before ISIS invades?

3. What do the Yazidi people believe? What is the importance of religion to the community and how is it demonstrated throughout the book?

4. What was the nature of Saddam Hussein’s Arabization policy and how did it effect Iraq’s Yazidi population?

5. What changes and challenges did modernization present to Nadia’s community? In your opinion, is it important for ethnic minorities and religious groups to maintain their unique identity or should they assimilate into more globalized notions of culture? Explain.

6. On page 31, Nadia states, “We had been taught about violence since our very first day of school.” What does Nadia mean by this and specifically how does it explain Iraq’s modern history?

9. Discuss the incident of Du’a Khalil Aswad and how it influenced Yazidi/Sunni relations.

10. On page 52 Nadia writes, “I still think that being forced to leave your home out of fear is one of the worst injustices a human being can face.” Do you agree or disagree with the author? Why or why not?

12. How did ISIS treat other religious and ethnic minorities in Iraq compared to Yazidis? Pay particular attention to how Iraqi Christians were treated. What similarities and differences do you see in the way ISIS treated these groups and what were the reasons?

13. Investigate a media outlet such as The New York Times, Wall Street Journal, or Washington Post and look for coverage about the situation on and around Mount Sinjar in August 2014. How did the U.S. media cover the events? How does U.S. media coverage compare to Nadia’s account of what happened?

14. Holocaust scholar Lawrence Langer coined the phrase “choiceless choices” to advance the notion that Holocaust victims were faced with a reality that presented different dimensions of moral choice compared to normal circumstances. Holocaust victims were frequently forced into situations where any choice made would have undesirable outcomes. Locate examples of “choiceless choices” in The Last Girl and discuss the thought process involved in these decisions. Note, the object here is not to judge the choices that victims made but rather understand on a deeper level the circumstances that victims of mass atrocity are faced with.

15. Often victims of mass atrocity are depicted as going passively to their deaths like sheep to the slaughter. How would you define resistance? Consider actions that go beyond armed resistance in your response. In what ways did Nadia and other Yazidis resist ISIS atrocities throughout the book?

16. How did ISIS members use the Quran and Islamic Law to designate women Sabaya and how did they justify their immoral actions and sexual abuse of Yazidi women?

17. On page 143, Nadia writes a brief meditation about justice. How would you define justice and what would it look like in the context of mass atrocities? Read pages 143–148 carefully and make a list of all of the people that you believe are guilty on a scale of 1–4 with 4 being the highest degree of guilt.

18. On page 148 Nadia writes that ISIS is “a terrorist group run on greed.” Why does she say this and what evidence is presented in the book up to and including this point? What other motivations for joining and supporting ISIS are given? Which one do you believe is the most compelling and why?

19. How did ISIS destroy Yazidi women without killing them?

20. What is the role of women in the ISIS organization? Pay particular attention to Morteja’s mother. Why is Nadia so conflicted over the issue of women perpetrators and justice?

21. In what way is rape considered a weapon of war?

22. Why do you believe Nasser’s family stayed in Mosul under ISIS, and how could their lives and values have changed by their experiences with Nadia?

23. In addition to ISIS perpetrators, who does Nadia seem most angry with and why? What are the implications about the choices these people make?

24. On page 239 Nadia describes crossing a bridge over the Tigris River and the reeds below. Interpret what she means about the reeds. What do the reeds symbolize? Explain.

25. After Nadia’s escape she lives in a half built house with her brothers and other survivors. Why does she refer to the house as “a house of misery”? Are you surprised that she is not more jubilant given her escape from ISIS?

26. What is the nature of the disagreement about the genocide between Nadia and the Kurdish farmer she works for?

27. On page 301 Nadia writes, “Longing for a lost place makes you feel like you have also disappeared.” What does she mean by this statement?

28. Why was it important for Nadia to tell her story?

29. If you could ask the author one question what would it be?

30. Why do genocides and mass atrocities occur?

Interventions
Back to Top