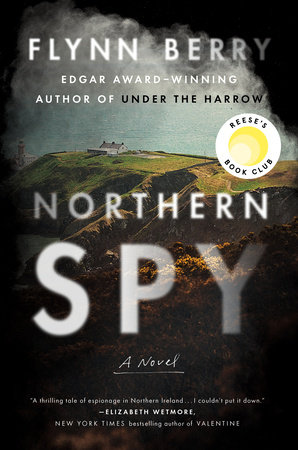 An Introduction to NORTHERN SPY by Flynn Berry

A producer at the BBC in Belfast and single mother to a six-month-old baby, Tessa is at work one day when the news of another IRA incident comes on the air. The Good Friday Agreement of 1998 should have brought peace to Northern Ireland, but the underlying conflict of the Troubles was never resolved: most Catholics still wanted a united Ireland, and some continued to work in secret on behalf of their cause, stockpiling weapons and lying in wait for another moment to rise up. Over the past few months, the threat level has been elevated to severe; for Tessa and her family and friends, bomb threats, security checkpoints, and helicopters floating ominously over the city are now features of everyday life.
As the news reporter requests the public’s help in locating those responsible for this latest raid—a robbery at a gas station—Tessa’s sister, Marian, appears on the screen. Tessa watches in shock as Marian pulls a black ski mask over her face.

Believing her sister has been abducted, Tessa rushes to a police station, only to learn that the police are convinced Marian has joined the IRA. But that can’t be, Tessa thinks. Though their family is Catholic, Tessa and Marian were raised to oppose the violence enacted in the name of republicanism. As a paramedic, Marian has saved the lives of victims injured in IRA bombings; the sisters have attended peace vigils together. And besides, Marian is vacationing in a rented cottage on the north coast. Tessa just spoke to her yesterday.

When the truth about Marian comes to light, Tessa is faced with impossible choices that test the limits of her ideals, the bonds of her family, her notions of right and wrong, and her identity as a sister and a mother. Walking an increasingly perilous road, she fears nothing more than endangering the one person she loves more fiercely than Marian: her infant son, Finn.

The third novel from acclaimed author Flynn Berry, Northern Spy is a riveting and exquisite novel about family, motherhood, terror, betrayal, and the staggering human costs of an intractable conflict.

1. Though Tessa thinks of herself and Marian as close, she comes to realize that she has misunderstood and perhaps underestimated her sister. What do you think is the root of Tessa’s blind spot? How did Tessa and Marian’s relationship change when Tessa left for Trinity College in Dublin? How does it evolve over the course of the novel?

2. When justifying her job at the BBC to her Catholic neighbors, Tessa often says, “You can’t change it unless you’re in it”. Why do you think Tessa chose this line of work? Do you think she is conflicted about working for a British news organization?

3. Discuss Marian’s relationship with Seamus, Damian, and Niall, and the concept of blood versus chosen families. Do you think their bond is genuine outside of their dependence on one another to accomplish their goals? Who do you think Marian is closer to? Who knows her best?

4. Do you understand what Tessa means when she observes that working with the IRA “make[s] you feel special”? Discuss the book’s depiction of how an “ordinary” citizen can become radicalized. Have you heard similar stories before? What do you think of the way women are strategically employed by such organizations?

5. Like many war stories, the narrative of the Troubles has been overwhelmingly male. What changes when you view a conflict through the lives of women? Did the violence affect them in different ways?

6. Tessa recalls, “My mother was always polite to the British soldiers, even though as teenagers, two of her brothers were beaten up by soldiers . . . She never shouted at the soldiers, like some women on our road did, or threw rocks at their patrols. I understand now that she was trying to protect us”. Do you think Tessa relates to her mother’s actions now that she has a child of her own and is faced with her own set of choices about how to keep him safe? How do you think the story would be different if Tessa wasn’t a mother herself? Do you see her as a good mother?

7. What do you think about the way Tessa and Marian’s mother is treated by her wealthy employers in Bangor? What are some of the other ways that social class factors into the story?

8. Tessa oscillates between being furious and frustrated with Marian, pitying her sister for how difficult her life has been and feeling guilty over her own inaction. Are you sympathetic to any of Marian’s arguments for why she went down the road she did? How do you think you would feel if you were in Tessa’s position? Would you have agreed to help her?

9. Discuss Tessa’s relationship with Eamonn. Do you think his behavior was all manipulation and performance on his part? How would you compare or contrast the tactics and morality of MI5 as depicted in the book to that of the IRA?

10. In the aftermath of the traumatic events at the safe house, Tessa copes with fatigue and homesickness, and suffers from flashbacks. Even though she is reassured that she is safe, “the fear still spreads out, like black ink in water”. How do you think the trauma will reverberate and/or eventually settle in her life? Do you think she will ever tell Finn what took place?

11. Throughout Northern Ireland, centuries of occupation and decades of domestic terrorism have impacted those on both sides of the conflict and ordinary citizens alike. How effectively did Berry capture this reality in Northern Spy? Did Northern Spy make you think differently about the Troubles or give you a new perspective on the conflict that you hadn’t previously considered? Do you believe it is possible for healing and reconciliation to emerge from an entrenched conflict such as this one, that pits neighbor against neighbor and touches every corner of society?

12. How would you characterize Tessa’s transformation over the course of the novel? What do you think is next for Tessa, Marian, and Finn? If there were a sequel to this book, what would you imagine might happen?

Flynn Berry is a graduate of the Michener Center for Writers and the recipient of a Yaddo fellowship. Her first novel, Under the Harrow, won the 2017 Edgar Award for Best First Novel and was named a best book of the year by The Washington Post and The Atlantic. Her work has been published in seventeen languages.
Learn More About Northern Spy
print

Pretty as a Picture

Djinn Patrol on the Purple Line

Velvet Was the Night
Back to Top