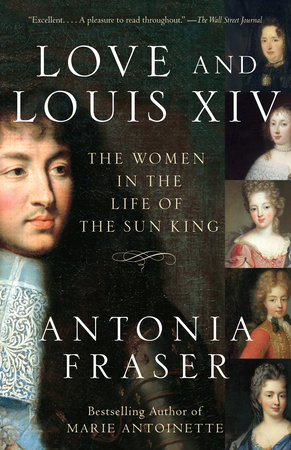 “Excellent. . . . . A pleasure to read throughout.” —The Wall Street Journal

The introduction, discussion questions, suggestions for further reading, and author biography that follow are designed to enhance your group’s discussion of Antonia Fraser’s Love and Louis XIV.

Louis XIV, the highly-feted “Sun King,” was renowned for his political and cultural influence and for raising France to a new level of prominence in seventeenth-century Europe. And yet, as Antonia Fraser keenly describes, he was equally legendary in the domestic sphere. Indeed, a panoply of women—his wife Marie-Thérèse; mistresses such as Louise de La Vallière, Athénaïs, Marquise de Montespan, and the puritanical Madame de Maintenon; and an array of courtesans—moved in and out of the court. The highly visible presence of these women raises many questions about their position in both Louis XIV’s life and in France at large. With careful research and vivid, engaging prose, Fraser makes the multifaceted life of one of the most famous European monarchs accessible and vibrantly current.

1. Discuss the various types and degrees of love that shaped Louis’s life. How did his mother’s circumstances—a pious woman, thirty-six when giving birth to him after so many childless years—affect his upbringing, and his perceptions of women?

2. Why might Queen Anne have lavished more affection on Louis than on his younger brother, Philippe (Petit Monsieur)? What were the results of this favoritism? How might the boys’ development have been influenced by the death of Louis XIII when his oldest son was just five years old?

3. What motivated Louis XIII’s deathbed attempts to keep Anne from serving as regent? What political legacies had led to their teenage marriage?

4. Was Anne’s influence over Louis beneficial—to France, to his personal life, to his legacy?

5. Was the marriage to the Infanta Marie-Thérèse a stroke of wisdom on the part of Anne and the Cardinal? Would marrying Marie Mancini (for love, no less) have compromised Louis’s power?

6. Chapter three concludes with the following line: “The marriage so ardently desired by Anne of Austria for over twenty-one years looked set fair to fulfil all of her hopes.” What were Anne’s hopes at that point? How do those hopes compare to the hopes of contemporary political leaders throughout the world?

7. Marie-Thérèse was raised in a culture that sometimes contradicted Louis’s, such as the ability of Spanish princesses to inherit the throne. Antonia Fraser even indicates that Marie-Thérèse never fully overcame their language barrier. Did she and Louis make a good match? Did Marie-Thérèse fall in love with her husband?

8. What transition is reflected in Louis’s short-lived romance with Henriette-Anne, who married his brother? Did Louis’s subsequent affair with Louise de La Vallière demonstrate the same chivalrous affection he had for Henriette-Anne, or did you view him as predatory? Did Louise’s final years in the convent comprise a tragic ending?

9. Was the power of Roman Catholicism beneficial to French kings? What was the impact of religious rituals—such as the high-profile Easter Mass—on Louis’s behavior? Did he appear to fear damnation, or public disapproval?

10. When Louis embarked on a period of long-term Double Adultery with Athénaïs, did you view this as being more dangerous than his previous adultery? Financially or otherwise, did Athénaïs fare better than the others?

11. What was your opinion of Louis’s adultery in general?

12. How did English history influence French history at this time? Did Louis seem to believe that a revolution such as Cromwell’s, complete with the execution of Charles I, could ever occur in his own country? Why did Louis offer refuge to King James II and Mary Beatrice?

13. Discuss the role of women in seventeenth-century France. Given the lack of options, was the role of mistress to Louis XIV a career opportunity? Did the church offer any means for religious women to gain power and influence?

14. The author provides considerable documentation of Louis XIV’s workaholism and perfectionism. What were the ultimate goals of his intense political planning and monitoring? What were the results of his detailed scrutiny?

15. Does Louis’s relationship with (and probable marriage to) Françoise represent his maturity, or his regression? Did Françoise emulate his mother’s role?

16. Why might Adelaide so easily have won Louis XIV’s heart? When she and Bourgogne died, what was the political and emotional cost?

17. What observations did you make about the role of royalty in sustaining the arts—such as Molière’s daring masterpiece Tartuffe? Did the humanities fare better or worse when monarchs were the primary patrons?

18. Love and Louis XIV vividly captures the spurious world of seventeenth-century healthcare. What medical misinformation was most intriguing to you? Why didn’t more patients refuse the procedure of bloodletting in light of the bold defiance of governess Duchesse de Ventadour (whose protection of Louis Duc d’Anjou is recounted in chapter fifteen)? How might the culture of Louis XIV, which demanded intermarriage and was obsessed with lineage, have viewed
twenty-first-century knowledge of DNA and infertility treatments?

19. How did you react to Liselotte? Was she uncouth and disrespectful or refreshingly candid? What cultural gulfs did she represent?

20. In chapter fifteen, Adelaide is quoted as saying, “. . . ‘England is better governed under a queen than under a king… under a king, a country is really ruled by women, and under a queen by men’ [p. 299].” How does this aphorism apply to Louis XIV? Was France hindered by the Salic law that prohibited women from inheriting the throne?

21. The opulence of Versailles contrasts with the poverty and starvation experienced by so many of Louis XIV’s subjects. In what way is this book a “prequel” to Antonia Fraser’s biography of Marie Antoinette? Discuss the author’s other previous works in the context of Love and Louis XIV.

Antonia Fraser is the author of numerous novels and historical works including Marie Antoinette, The Wives of Henry VIII, Mary Queen of Scots, and Faith and Treason. She is also famous for her Jemima Shore series of mysteries. She and her husband, Harold Pinter, live in London.

The Women of the Real Downton Abbey
The Countess of Carnarvon

The Life of Thomas More
Peter Ackroyd
Back to Top