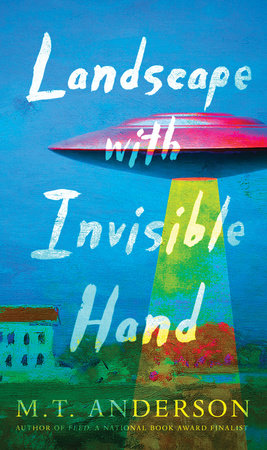 About Landscape with Invisible Hand

National Book Award winner M. T. Anderson returns to future Earth in a sharply wrought satire of art and truth in the midst of colonization.

When the vuvv first landed, it came as a surprise to aspiring artist Adam and the rest of planet Earth — but not necessarily an unwelcome one. Can it really be called an invasion when the vuvv generously offered free advanced technology and cures for every illness imaginable? As it turns out, yes. With his parents’ jobs replaced by alien tech and no money for food, clean water, or the vuvv’s miraculous medicine, Adam and his girlfriend, Chloe, have to get creative to survive. And since the vuvv crave anything they deem "classic" Earth culture (doo-wop music, still-life paintings of fruit, true love), recording 1950s-style dates for the vuvv to watch in a pay-per-minute format seems like a brilliant idea. But it’s hard for Adam and Chloe to sell true love when they hate each other more with every passing episode. Soon enough, Adam must decide how far he’s willing to go — and what he’s willing to sacrifice — to give the vuvv what they want. 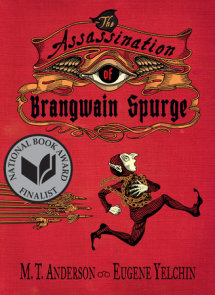 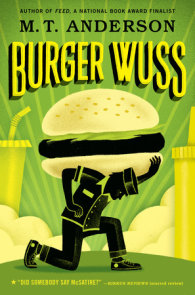 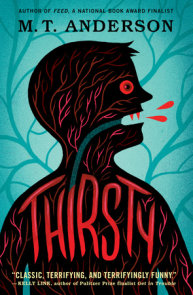 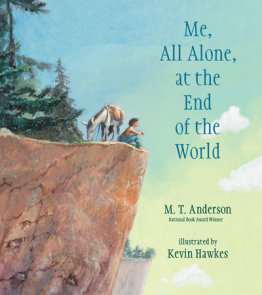 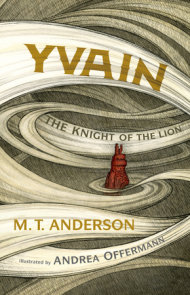 See all books by M.T. Anderson

In short vignettes titled as if they are pieces of fine art, the bleakness of this new reality is expertly rendered…Resplendent with Anderson’s trademark dry, sarcastic wit, this brief, complicated read serves as a scathing social commentary and, as the title indicates, an interrogation of free market economics.
—Kirkus Reviews (starred review)

Some fear that hyper-capitalist technocrats, under the guise of altruism and progress, are fleecing the world; Anderson (Feed, 2002) stretches this premise to deliriously enjoyable extremes…Throw in a romantic rival, an interplanetary art contest, and plenty of scintillating details about the Lovecraftian horrors of the vuvv, and you’ve got the makings of an elegant, biting, and hilarious social satire that will appeal to dissatisfied, worried readers of all ages.
—Booklist (starred review)

Anderson takes issues of colonialism, ethnocentrism, inequality, and poverty and explodes them on a global, even galactic, scale. A remarkable exploration of economic and power structures in which virtually all of humanity winds up the losers.
—Publishers Weekly (starred review)

This sharp, compelling, slim volume packs a punch. Anderson’s vivid world could be a mirror for many American communities today…Despite the heavy subject material and pervading sense of doom, the book ends on a hopeful note, making this a solid choice for a variety of readers. An engrossing, speculative look at life in the margins, this is a first purchase for libraries serving teens.
—School Library Journal (starred review)

Parable, satire, dystopic sci-fi—Anderson’s take on a near future in which alien “vuvv” have colonized America’s economy, land, and airspace has so many shiveringly close resemblances to the contemporary world that it might also be termed “realism.”…Anderson’s prose is almost hyper-lucid here—appropriately so, as the story is structured around Adam’s descriptions of his paintings. Practically every word reflects a prescient, bitingly precise critique of contemporary human folly, of economic and environmental inequities and absurdities.
—The Horn Book (starred review)

M.T. Anderson (Feed; Symphony for the City of the Dead) has written a biting satire about the world’s haves and have-nots, set in an increasingly stratified near-future where the human race has, for the most part, become expendable. It’s a strange and wonderful fantasy about seeking love amid the filth, and keeping hope alive, despite unquestionable odds against it.
—Shelf Awareness for Readers (starred review)

Anderson’s down-and-out in the post-scarcity world is a scorching, arch, hilarious and ultimately very moving little parable about the cult of markets and the elevation of corporatism over human kindness. It’s as zeitgeisty as Feed ever was, and such a compact little gem of a book that you very well might read it in one sitting, as I did.
—Cory Doctorow

Ultimately, though, I don’t read J.K. Rowling — or M.T. Anderson, or Ursula K. Leguin — because of what their books have to tell me about life. I read them because these writers have mastered the ancient magic of storytelling, and because they remind me of what it’s like to be young, living in a world that seems both simple and incomprehensible.
—The New York Times

In the near sci-fi future envisioned by M.T. Anderson in his slim and coruscating young-adult novel ‘Landscape With Invisible Hand,’ human adolescents flirt and banter for the pay-per-view pleasure of earth’s new overlords, a squat species of alien known as the vuvv…In this bitter, witty story for readers ages 14 and older, Adam’s only hope seems to lie in winning a lucrative trans-galactic art prize—until he hits on an even more radical solution.
—The Wall Street Journal

In this novella, National Book Award winner M.T. Anderson writes a multilayered and scathing satire…It’s a bleak but necessary lesson in trying to find the beauty in the disastrous, all while learning to recognize when it’s time to dream a new dream.
—BookPage

Fans of Feed will be intrigued to follow the development of Anderson’s dystopic imagination into this similarly themed futuristic critique of the present.
—Bulletin of the Center for Children’s Books

A slim, stark, brilliant cultural commentary…a satirical portrait of the artist as a young man and a resonant portrait of contemporary society.
—Globe and Mail