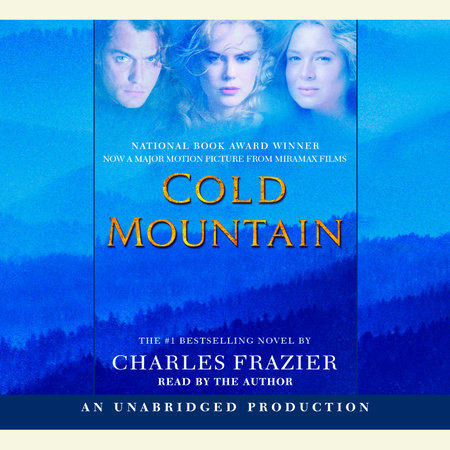 The questions, discussion topics, and suggested reading list that follow are intended to enhance your group’s reading of Charles Frazier’s Cold Mountain. We hope they will provide new insights and ways of looking at this stunning novel.

The Civil War is wearily entering its last, grisly year. Inman, a veteran of the Petersburg and Fredericksburg campaigns, recovering from his wounds in a Confederate hospital, decides he has had enough of the pointless slaughter and walks out, heading across the Blue Ridge Mountains of North Carolina toward Cold Mountain, where he hopes to reclaim his spiritual homeland and Ada, the woman he loves. It is to be an unforgettable odyssey through the soon-to-be-defeated South, with Inman pursued by relentless Home Guard troops whose task it is to hunt out deserters. Interwoven with Inman’s heart-stopping adventures is the story of Ada’s own internal journey. A genteel intellectual, Ada has been sheltered by her clergyman father from the hard necessities of life. Now, orphaned and impoverished, she must confront the physical world for the first time as she struggles to make her rundown farm self-sufficient. With the help of Ruby, a tough, brave young woman, she comes to terms with the forces of nature and, in the process, with her own soul. As Ada and Inman’s lives, long-separated, begin finally to converge, they discover unsuspected truths about themselves and each other, and about the new world that is being born from the ruins of the old.

Charles Frazier writes about his native territory with the eye of a lifelong countryman and the voice of a poet. Cold Mountain is a saga of discovery, terror, and knowledge that is epic in its passion and mythic in scope.

1. How would you describe the style, or the voice, in which Charles Frazier tells his story? Do you find it realistic or stylized? What does it add to the overall effect of the story?

2. Charles Frazier seems to imply that, because of the moral barrenness of the Civil War and the crimes committed on the battlefield in the name of honor, there is no moral onus attached to the act of desertion? Do you agree with him? Why has Frazier chosen to portray the deserters as good, the Home Guard as evil?

3. How have Inman’s views on secession, slavery, and war changed by the time he finds himself in the military hospital? What has he come to believe of both sides, the Federals and the Confederates, their leaders, and their motivations for fighting? Is he being overly cynical? How does the fighting and the level of blind violence in the Civil War compare with other, more recent wars?

4. Inman remembers a conversation he had with a boy he met after the battle of Fredericksburg, when he pointed out Orion’s principal star. The boy replied, "That’s just a name we give it. . . . It ain’t God’s name." We can never know God’s name for things, the boy continues; "It’s a lesson that sometimes we’re meant to settle for ignorance" [p. 117]. How does this statement correspond with the lessons learned by Ada and Ruby? What point does Cold Mountain make about the nature and limitations of human knowledge?

5. Inman has little use for conventional religion, but he liked one sermon of Monroe’s: "That which shows God in me, fortifies me. That which shows God out of me, makes me a wart and a wen. There is no longer a necessary reason for my being. Already the long shadows of untimely oblivion creep over me, and I shall decrease forever" [p. 77]. What notion of "God" does this quotation endorse? What about the voice that spoke to Ruby when, as a child, she was in despair: Was this God’s voice, and if so, in what does God consist? What do you conclude Frazier’s ideas to be, and how do they differ from conventional Christianity?

6. How, finally, does Frazier portray the natural world: as benign, treacherous, cruel, or indifferent? Famous contemporaries of Inman and Ada–thinkers like Darwin, Wordsworth, and Emerson–were expressing new ideas, in poetry and prose, about nature. How do these ideas influence Monroe’s thinking? "Monroe had commented that, like all elements of nature, the features of this magnificent topography were simply tokens of some other world, some deeper life with a whole other existence toward which we ought aim all our yearning" [p. 144]. What very different conclusions does Ada come to? How do Inman and Ruby view the natural world?

7. Remembering his friend Swimmer, Inman reflects that Swimmer’s spells "portrayed the spirit as a frail thing, constantly under attack and in need of strength, always threatening to die inside you. Inman found this notion dismal indeed, since he had been taught by sermon and hymn to hold as truth that the soul of man never dies" [p. 20]. Which version of the soul seems to be borne out during the course of the book? Does Inman come to change his ideas during his journey?

8. Throughout Cold Mountain, the author works with the idea of the search for the soul. Inman, Ada, Ruby, Stobrod, Veasey, and the slaveholder’s runaway son Odell are all in some way engaged upon this search. Which of them is, in the end, successful, and why?

9. Both Ada and Inman reflect, at different times, that they are living in a "new world" [p. 33]. . . . What changes is nineteenth-century America undergoing, and how do Ada and Inman’s experiences, and the people they meet, reflect those changes? How, and why, is the ideal of womanhood changing?

10. Both Ada and Ruby were motherless children from the time they were born. How has that state affected their characters and formed their ideas? How has it molded their relationships with their fathers? Do both women reconcile themselves to their fathers in the end, and if so, why?

12. Several of Cold Mountain‘s characters meet their death during the course of the novel. How do these characters’ deaths reflect, or redeem, their lives? What points are made by the particular deaths of Veasey, Ada’s suitor Blount, Pangle, Monroe, and others?

13. Stobrod claims not to be Ruby’s true father; his wife, he says, was impregnated by a heron. What other mythical or animistic images does the book offer, and what is their purpose? How does Frazier view, and treat, the supernatural?

14. What is the significance of the Cherokee woman’s story about the Shining Rocks? What does it mean to Inman, and why is Ada skeptical? What does her reaction tell us about her character?

15. Charles Frazier has based his novel loosely on Homer’s Odyssey. If you are familiar with The Odyssey, which incidents from it do you find reproduced in Cold Mountain, and how has Frazier reimagined them? Why do you think he might have chosen this structure for a Civil War novel? What similarities do the two works have in the way they deal with war? With love and marriage? With fidelity? With home? With spiritual growth? How is Inman like Odysseus?

Charles Frazier grew up near Cold Mountain in the Blue Ridge of North Carolina. The son of a high school principal, he received a Ph.D. in English literature and was teaching literature part-time when he became interested in the history of W. P. Inman, his great-great-uncle, whose Civil War journey back to his mountain home became the inspiration for Cold Mountain.

The Ministry of Fear
Graham Greene

Return of the Trickster
Eden Robinson

The Inner Circle
T.C. Boyle
Back to Top