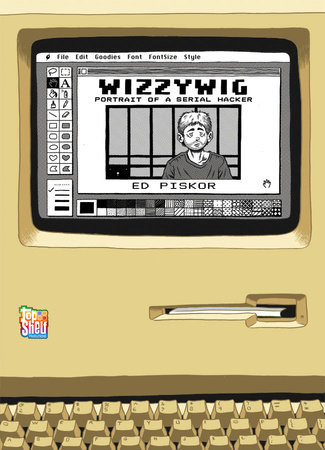 They say “What You See Is What You Get”… but Kevin “Boingthump” Phenicle could always see more than most people. In the world of phone phreaks, hackers, and scammers, he’s a legend. His exploits are hotly debated: could he really get free long-distance calls by whistling into a pay phone? Did his video-game piracy scheme accidentally trigger the first computer virus? And did he really dodge the FBI by using their own wiretapping software against them? Is he even a real person? And if he’s ever caught, what would happen to a geek like him in federal prison?
Inspired by the incredible stories of real-life hackers, Wizzygig is the thrilling tale of a master manipulator — his journey from precocious child scammer to federally-wanted fugitive, and beyond. In a world transformed by social networks and data leaks, Ed Piskor’s debut graphic novel reminds us how much power can rest in the hands of an audacious kid with a keyboard.