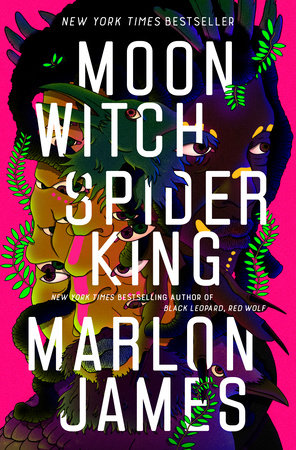 1.
Moon Witch, Spider King is the story of Sogolon and her perspective on the events that were also recounted in Black Leopard, Red Wolf. What aspect of her personality or what part of the storytelling struck you as the key to understanding her?

2. One thread of Sogolon’s story is how she becomes the Moon Witch. What element in her journey did you find most surprising?

3. Sogolon’s early life was difficult, even abusive. What do you think she learned from those experiences that helped her later?

4.  As the novel progresses, the reader learns about how Sogolon deals with her emotions. What struck you as you watched her learn to love or channel her anger?

5. The places Sogolon travels to in this novel are full of unexpected creatures. Which of them struck you as the most dangerous? The most frightening? Which of them would you like to know more about?

7.  One way of looking at Moon Witch, Spider King is to see it as a woman’s struggle for autonomy and power. Do you think that Sogolon could have made different choices to make life easier for herself? Or was her story somehow inevitable?

8. Sogolon’s adversary in this novel is the Aesi, the powerful royal chancellor. What did you think of her confrontations with him?

9. How trustworthy do you think Sogolon is as a character? Do you believe her version of events?

10. Moon Witch, Spider King obviously exists in its own world, but were there parallels to real life that occurred to you as you read?

11.  If you had to describe Sogolon, what three words would you use?

What in Moon Witch, Spider King surprised you the most? And what part of the novel—character, event, or setting―do you think would have been the most fun to write?

When Women Were Dragons

The Daughter of Doctor Moreau

All the Seas of the World

The Space Between Worlds

Captive Prince
Back to Top