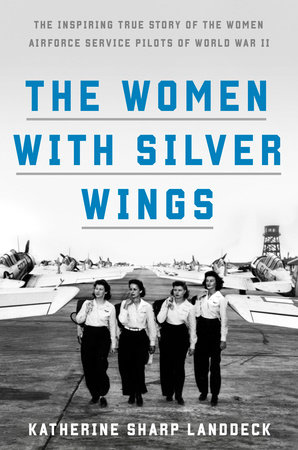 1) Before reading The Women With Silver Wings, what did you know about women’s contributions to World War II? Were you familiar with the WASP?

2) The WASP was the brainchild of two trailblazing pilots, Jacqueline Cochran and Nancy Harkness Love. What did they have in common? What set them apart?

3) Nancy and Jackie had strict standards for WASP applicants, including significant flight time, a high level of educational attainment, and even—at least for Jackie’s program—a conventionally attractive appearance. Why were they so insistent on maintaining these standards, which were higher than those for men?

4) The women of the WASP grew up in a culture obsessed with flight, in which the fastest, most daring pilots—including women like Amelia Earhart—were as famous as film stars. What did flying represent for girls and young women in the 1920s and 1930s? How did it influence them to join the WASP?

5) In order to get the WASP off the ground, Nancy and Jackie needed the support of male allies in positions of power. Chief among them was General Henry “Hap” Arnold. What was his motivation in helping the women? Was he ultimately a reliable ally? What about other prominent men, such as General Tunner, Bruce Arnold, and Barry Goldwater?

6) The WASP came from all over the country and from many different walks of life; they included both rural working-class women like Teresa James and daughters of the military and social elite. How did they form friendships and develop camaraderie? Were there unbridgeable differences? How did they draw on these bonds when fighting for recognition as veterans in the 1970s and beyond?

7) Jackie and Nancy had very different visions of how women might contribute to the war effort. Nancy advocated hiring an elite group of pilots who would be fully integrated into the Army Air Forces, while Jackie wanted a larger group who, while part of the AAF, would be administratively segregated from men. What was their reasoning and how was the conflict ultimately resolved?

8) In the early years of the program, the WASP became a media sensation, with reporters, photographers, and newsreel crews eager to capture stories and images of attractive young women flying military planes. How was it portrayed in early media coverage and how and why did this image shift as the tide of the war turned?

10) While the WASP flew military planes and worked alongside military pilots, they were not officially members of the military themselves. What did this mean for their day-to-day lives in training and on base? How did it affect their lives after the war?

11) The WASP expected to become members of the Army Air Forces, a plan that Nancy Love, Jackie Cochran, and General “Hap” Arnold all supported. However, when the bill to militarize the WASP went before Congress, it failed. Why? Was there anything that might have changed its fate? What role did Nancy, Jackie, and Betty Gilles play and do they share some of the blame for its failure, or was it inevitable given the politics of the time?

12) In the aftermath of the failure of the bill to militarize the WASP in June 1944, the training program was closed immediately—and whole organization shuttered by December. Why were the WASP sent home while the war was still ongoing? Do you agree with this decision?

13) As a member of the last class of WASP trainees, Marty Wyall was only able to serve for a few weeks before disbandment, but she treasured this time and ultimately became instrumental in the effort to attain veteran status. What did this status mean for Marty and her fellow WASP?

14) After the war was over, many women, like Dora and Helen, had trouble finding jobs that would allow them to continue flying. What barriers to working as pilots did they and their classmates encounter after the war? How do these relate to the challenges faced by working women today?

15) The Women With Silver Wings follows the stories of several WASP, some of them famous—including Jackie Cochran and Nancy Love—and others whose stories are less familiar, like Teresa, Dora, and Marty. Was there one you particularly liked, or whose story you found most interesting or relatable? Were there any you disliked?

16) Today, women military pilots serve alongside men—but their numbers are few. Commercial aviation, too, remains a male-dominated field. What does the example of the WASP mean for women in aviation? How might their story be used to encourage more women to fly?

Learn More About The Women with Silver Wings
print

We Band of Angels
Elizabeth Norman and Elizabeth M. Norman

Hero of the Empire
Candice Millard

Flags of Our Fathers
Ron Powers and James Bradley

And If I Perish
Rosemary Neidel-Greenlee and Evelyn Monahan

Confederates in the Attic
Tony Horwitz

The Watermen
James A. Michener

The Dying Grass
William T. Vollmann
Back to Top