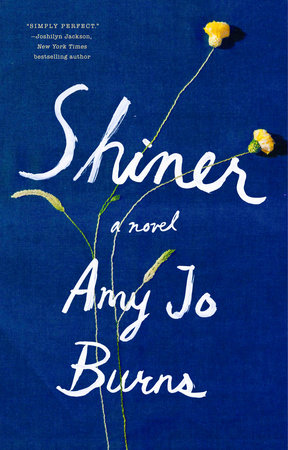 1. Shiner centers on the stories of three women—Wren; her mother, Ruby; and Ruby’s best friend, Ivy—living on an isolated mountain in coal country. The opening line of the novel is: “Making good moonshine isn’t that different from telling a good story, and no one tells a story like a woman.” What is Shiner saying about the power of storytelling, and in particular, about the importance of women’s voices?

2. Early in the novel, Ivy tells Wren, “Weddings are funerals. Don’t you dare dream of them.” In what ways have Ivy’s and Ruby’s lives been hampered by the men they have chosen to marry? Discuss the factors that led them to make those particular choices. How does each of them express regret? How does their regret affect Wren?

3. Shiner is also about the power of female friendship. How do Ivy and Ruby model closeness and mutuality? How does their connection sustain them across decades? In what ways has their friendship changed the course of their lives, for better or worse?

4. When did you begin to suspect that there was more to Briar’s miracles than meets the eye? Discuss how Shiner interrogates the power of belief. How does the legend of Briar’s white eye contribute to his status in the community? Whose belief matters most to Briar, and why?

5. The natural world plays a large part in the novel. Compare and contrast how the town of Trap and the mountain are portrayed. What dangers lurk in each place, and what beauties? Which characters believe the natural world can be tamed? Which are enthralled by its power?

6. How does Wren learn and grow from her relationship with Caleb? What does he teach her about the world beyond her mountain, and what does she teach him about her own culture and way of life?

7. Flynn Sherrod makes moonshine in the dark, keeping his craft a secret from the law. In what ways is his moonshine a metaphor for the secrets he is compelled to keep throughout the book? How do these secrets protect the people he cares for most? What is the cost of keeping these secrets, to the other characters and to Flynn himself?

8. Consider the adult men in Shiner—Flynn, Briar, Hasil, Noble, and Ricky. What accounts for the differences between them and for the ways they relate to women? What about the young men—Caleb, Sonny, and Ivy’s sons?

9. Discuss the fates of the three main women in the novel, Ivy, Ruby, and Wren. How has Wren changed by the end of the story? What do you think about her choice to remain on the mountain? In what ways will her life be different from that of her mother, or of Ivy?

Happy and You Know It

Last Summer at the Golden Hotel
Back to Top