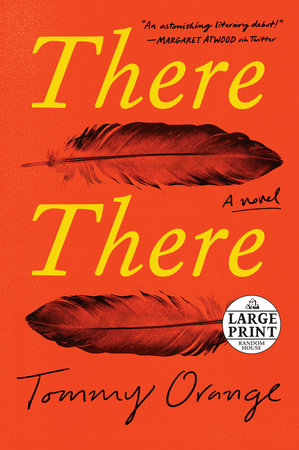 print
There There Reader’s Guide

1. The prologue of There There provides a historical overview of how Native populations were systematically stripped of their identity, their rights, their land, and, in some cases, their very existence by colonialist forces in America. How did reading this section make you feel? How does the prologue set the tone for the reader? Discuss the use of the Indian head as iconography. How does this relate to the erasure of Native identity in American culture?

2. Discuss the development of the “Urban Indian” identity and ownership of that label. How does it relate to the push for assimilation by the United States government? How do the characters in There There navigate this modern form of identity alongside their ancestral roots?

3. Consider the following statement from page 9: “We stayed because the city sounds like a war, and you can’t leave a war once you’ve been, you can only keep it at bay.” In what ways does the historical precedent for violent removal of Native populations filter into the modern era? How does violence—both internal and external—appear throughout the narrative?

4. On page 7, Orange states: “We’ve been defined by everyone else and continue to be slandered despite easy-to-look-up-on-the-internet facts about the realities of our histories and current state as a people.” Discuss this statement in relation to how Native populations have been defined in popular culture. How do the characters in There There resist the simplification and flattening of their cultural identity? Relate the idea of preserving cultural identity to Dene Oxendene’s storytelling mission.

6. When readers are first introduced to Dene Oxendene, we learn of his impulse to tag various spots around the city. How did you interpret this act? How does graffiti culture work to recontextualize public spaces?

7. Discuss the interaction between Opal Viola Victoria Bear Shield and Two Shoes that occurs on pages 50–52. How does Opal view Two Shoes’s “Indianness”? What is the import of the Teddy Roosevelt anecdote that he shares with her? How does this relate to the overall theme of narrative and authenticity that occurs throughout There There?

8. Describe the resettlement efforts at Alcatraz. What are the goals for inhabiting this land? What vision does Opal and Jacquie’s mother have for her family in moving to Alcatraz?

10. On page 77, Edwin Black asserts, “The problem with Indigenous art in general is that it’s stuck in the past.” How does the tension between modernity and tradition emerge throughout the narrative? Which characters seek to find a balance between honoring the past and looking toward the future? When is the attempt to do so successful?

11. Discuss the generational attitudes toward spirituality in the Native community in There There. Which characters embrace their elders’ spiritual practices? Who doubts the efficacy of those efforts? How did you interpret the incident of Orvil and the spider legs?

12. How is the city of Oakland characterized in the novel? How does the city’s gentrification affect the novel’s characters? Their attitudes toward home and stability?

13. How is femininity depicted in There There? What roles do the female characters assume in their community? Within their families?

14. Discuss Orvil’s choice to participate in the powwow. What attracts him to the event? Why does Opal initially reject his interest in “Indianness”? How do his brothers react to it?

15. Discuss the Interlude that occurs on pages 134–41. What is the import of this section? How does it provide key contextual information for the Big Oakland PowWow that occurs at the end of the novel? What is the significance of this event and others like it for the Native community?

16. Examine the structure of There There. Why do you think Orange chose to present his narrative using different voices and different perspectives? How do the interlude and the prologue help to bolster the themes of the narrative? What was the most surprising element of the novel to you? What was its moment of greatest impact?

Learn More About There There
print

The Heart’s Invisible Furies
John Boyne
Back to Top