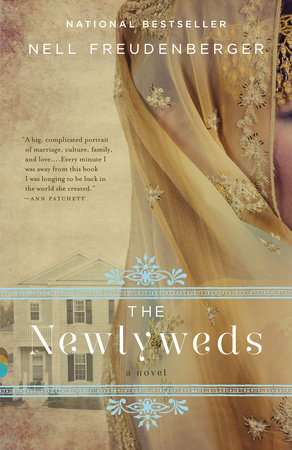 The questions, discussion topics, and suggestions for further reading that follow are designed to enhance your group’s exploration of The Newlyweds, Nell Freudenberger’s powerful, funny, richly observed story of love and marriage, secrets and betrayals, that takes us from the backyards of America to the back alleys and villages of Bangladesh.

In The Newlyweds, we follow the story of Amina Mazid, who at age twenty-four moves from Bangladesh to Rochester, New York, for love. A hundred years ago, Amina would have been called a mail-order bride. But this is an arranged marriage for the twenty-first century: Amina is wooed—and woos—George Stillman online.
For Amina, George offers a chance for a new life and a different kind of happiness than she might find back home. For George, Amina is a woman who doesn’t play games. But each of them is hiding something: someone from the past they thought they could leave behind. It is only when they put an ocean between them—and Amina returns to Bangladesh—that she and George find out if their secrets will tear them apart, or if they can build a future together.

The Newlyweds is a surprising, suspenseful story about the exhilarations—and real-life complications—of getting, and staying, married. It stretches across continents, generations, and plains of emotion. What has always set Nell Freudenberger apart is the sly, gimlet eye she turns on collisions of all kinds—sexual, cultural, familial. With The Newlyweds, she has found her perfect subject for that vision, and characters to match. She reveals Amina’s heart and mind, capturing both her new American reality and the home she cannot forget, with seamless authenticity, empathy, and grace.

Delving into unsettling truths about marriage and identity, The Newlyweds is written with humor and a profound understanding of the choices, the luck, and the risks that shape the major decisions of our lives.

1. Amina thinks, “Their courtship had more in common with her grandparents’—which had been arranged through a professional matchmaker in their village—than with her parents’, who’d had a love marriage” (p. 28). Are there fundamental differences between finding a partner on the Internet and traditional matchmaking methods? What might make a traditional arranged marriage or one made online appealing to men and women in the twenty-first century?

2. What does Amina and George’s online correspondence reveal about their respective personalities and expectations? In what ways are they well suited to each other despite their different backgrounds? What do their decisions to seek a spouse online indicate about their approaches to and ideas about marriage? How do their personal motivations influence the information they offer—and hold back?

3. “In spite of all the preparation, there was something surprising about actually finding herself in Rochester, waiting for a green card in the mail” (pp. 7–8). What aspects of Amina’s new life does she find puzzling, pleasing, or difficult to accept?  Consider, for example, the dinner at George’s mother’s house (p. 18); the wedding preparations and ceremony (pp. 38–40); and her various work experiences. What presents the greatest psychological challenges? What compromises does she make and why?

4. Spurred by “Amina’s anxiety about the Muslim ceremony, without which they wouldn’t really be married” (p. 34), the couple searches for an imam to marry them. Why does Amina decide against getting married at the Islamic Center of Rochester? What does the decision reflect about the role religion plays in her life? What does it convey about her complicated attachment to her past? How does she reconcile her decision with the promises she made to her parents?

5. “She struggled to find some connection between the girl she so often imagined at home in her parents’ apartment and this American wife. . . . The task was made more difficult by the fact that there was no one in Rochester who’d known that past-Munni, and no one back at home who knew the present one” (p. 59). How does this passage capture the isolation and sense of displacement that is often part of the immigrant experience? Are there parallels between Amina’s feelings and the feelings of any young wife (or husband) in the early years of marriage?

6. How would you characterize the friendship between Kim and Amina? What does each of them find appealing in the other? Is their relationship built on genuine affection or on false premises and selfish interests?

7. How do Kim’s experiences in India (pp. 122–26) and her life with Ashok in post-9/11 New York (p. 151–55) relate to the themes of the novel? What do their stories reveal about the effects of cultural and religious prejudices on ordinary people? How do their ordeals compare to Amina’s?

8. “She and George didn’t disagree very often, but when they did it was always because of ‘cultural differences’—a phrase so useful in forestalling arguments that she felt sorry for those couples who couldn’t employ it” (p. 66). To what extent are the problems or misunderstandings in their marriage attributable to “cultural differences”? What role do the emotional differences between them play?

9. Is Amina’s search of Kim’s apartment justifiable (pp. 141–42)? Why doesn’t she confront Kim directly? Are the conclusions Amina draws about George’s family as clear-cut as she assumes (p. 143)? Is her observation, made in a moment of bitterness—“You might cheat, steal, lie, but if you confessed, you could be instantly forgiven” (p. 147)—a valid assessment of American behavior?

10. What impact does Amina’s discovery about George’s past have on the dynamics of their marriage? Does his explanation of his deception (pp. 148–49) and his subsequent behavior (pp. 156–57) change your feelings about him? In light of his confession, are Amina’s demands reasonable, or do they amount to emotional blackmail? Consider her own interpretation: “What a strange thing, she thought, to find out one day that you had built your whole life on a mistake, and the next day to discover that this fact would allow you to have your dearest wish. She wondered if this was a unique predicament, something related to the unusual circumstances of her life, or a more general human condition” (p.156). Discuss your responses to this in terms of the novel and your own experiences.

11. When she arrives in Bangladesh, Amina thinks, “You thought you were the permanent part of your own experience, . . . until you discovered that there were many selves, dissolving into one another” (p. 207). Is Amina’s experience unusual, or is this a common reaction to returning home after a long absence?

12. How does Freudenberger bring the atmosphere and social milieu of Bangladesh to life in the narrative? Which details best evoke the emotional pull Amina feels toward her homeland?

13. During a lighthearted flirtation with Nasir, Amina thinks of the past and realizes, “She had the same feelings, sweeter because they’d been dormant for so long, but her wish from that time had been granted: she was a grown woman, with everything she would need to attract a man like Nasir” (pp. 250–51). Why are she and Nasir so drawn to each other? What part does nostalgia, the comfort of the familiar, and the loneliness they experienced—Nasir in London, Amina in America—have in the awakening of their feelings? What do you think would have happened had she chosen to pursue Nasir instead of returning home to George?

14. How do their families’ examples, opinions, and advice shape Amina and George’s relationship? Compare the influences of various family members (Amina’s parents and extended family in Bangladesh; George’s mother, Eileen Stillman, and his aunt Cathy and cousin Jessica). What does the novel show about the qualities, good and bad, shared by families from every culture or country?

15. Freudenberger often moves from a scene in Rochester to a past event or conversation in Dhaka. How does this affect the flow of the plot? What does it contribute to your understanding of Amina and the forces and feelings that have shaped her?

16. “She had escaped a broken country, and George a broken heart; they had chosen each other in spite of warnings from both sides. . . . Even if neither of their motives had been pure, wasn’t it possible that something pure had come of them now?” (pp. 174–75). Does Amina and George’s commitment to each other ever evolve into genuine love? Cite specific moments in the novel to support your point of view.

17. Freudenberger ends the novel with a twist: Amina’s “Reach for the Stars” essay, which has actually been composed by Kim for a writing competition sponsored by Starbucks. As Mohsin Hamid noted in his front-cover review of The Newlyweds in The New York Times Book Review (April 29, 2012), this essay has a certain parallel to Freudenberger’s own role as author—and it poses a larger question about authenticity and storytelling. What pitfalls might Freudenberger have faced, if any, in writing Amina’s story? Do you agree with Hamid’s statement that, for fiction “the question of authenticity  . . . is a red herring: nationalities, ethnicities, genders and even species do not ‘own’ the right to fictional narratives spoken in what purport to be their voices”? To what extent is Amina in her new American life crafting a persona different from the “authentic” self she knew at home?

Nell Freudenberger is the author of the novel The Dissident and the story collection Lucky Girls, winner of the PEN/Malamud Award and the Sue Kaufman Prize for First Fiction from the American Academy of Arts and Letters; both books were New York Times Book Review Notables. A recipient of a Guggenheim Fellowship, a Whiting Award, and a Dorothy and Lewis B. Cullman Fellowship from the New York Public Library, she was named one of Granta’s Best Young American Novelists and one of The New Yorker’s “20 Under 40.” She lives in Brooklyn with her family.

We’re All in This Together
Amy Jones