How to Stop Time Reader’s Guide 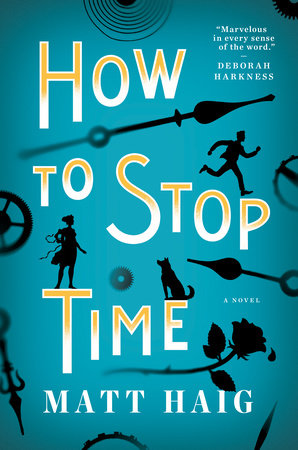 How to Stop Time Reader’s Guide

‘The first rule is that you don’t fall in love,’ he said, wiping a waffle crumb off the table with his finger before lighting a cigar. ‘There are other rules too, but that is the main one. No falling in love. No staying in love. No daydreaming of love. If you stick to this you will just about be okay.’

I stared through the curving smoke of his cigar. ‘I doubt I will ever love again.’ (page 100)

Tom Hazard has just moved back to London, his old home, to settle down and become a high school history teacher. And on his first day at school, he meets a captivating French teacher at his school who seems fascinated by him. But Tom has a dangerous secret. He may look like an ordinary forty-one-year-old, but owing to a rare condition, he’s been alive for centuries. Tom has lived history – performing with Shakespeare, exploring the high seas with Captain Cook, and sharing cocktails with Fitzgerald. Now, after centuries of running from his past and avoiding any lasting connections to anyone around him, he just wants an ordinary life.

Unfortunately for Tom, the Albatross Society, the secretive group which protects people like Tom, has one rule: Never fall in love. After the heartbreak of losing his wife and being separated from his daughter, he managed to lose himself in his travels around the world. But as painful memories of his past and the erratic behavior of the Society’s watchful leader threaten to derail his new life and romance, the one thing he can’t have just happens to be the one thing that might save him. Tom will have to decide once and for all whether to remain stuck in the past or to finally begin living in the present.

How to Stop Time tells a love story across the ages – and for the ages – about a man lost in time, the woman who could save him, and just how many lifetimes it can take to learn how to live. It is a bighearted, wildly original novel about losing and finding yourself, the inevitability of change, and how with enough time to learn, we just might find happiness.

1. The Albatross Society exists ostensibly to protect people like Tom; do you think a society like this should exist? Should people with anageria have a right to keep the condition a secret? And could such a society exist without being so nefarious? Would the public even take such a revelation seriously, or would anyone claiming to be so old wind up like Mary Peters, in a mental institution?

2. Over the course of his life, Tom traveled the world and met some of the most important and adventuresome people in history, but he also faced persecution and hardship because of his condition. Would you want to live for hundreds of years? If you could pick anything to do anywhere in the world, what would you do? Who would you want to meet?

3. Do you think Tom should have left Rose? Should he have come back? How do you think you would feel if after all that time, nearing the end of your life, a figure from your past showed up unexpectedly and completely unchanged?

4. Omai starts to gain public exposure for his condition when videos of him surfing appear on YouTube. In a post-internet world, would it even be possible to keep a condition like anageria a secret? Or would its exposure be inevitable?

5. Camille confronts Tom about who he is when she finds a picture of him in Chile from the 1920s, but he tries to cover his tracks by saying her accusations were science fiction. Do you think he should have been able to tell her the truth?

6. Tom tells his history students that ‘People believed in witches because it made things easier’; ‘People don’t just need an enemy, they need an explanation’; and ‘The first technology to lead to fake news wasn’t the internet, it was the printing press’ (page 56). Do you think that the rise of fake news is as old as news itself? How much of the hardships Tom faced in his life are due to this tendency?

7. Tom and his mother have to flee France when Tom is very young to escape religious persecution. Does Tom’s plight in his childhood and the rest of his life shed any light on the situation of immigrants and refugees today?

8. Matt Haig has said that researching this novel was the most fun he had while writing a book. If you were going to pick the times and places to base a story with a five-hundred-year-old protagonist, where and when would you pick?

Learn More About How to Stop Time
print

The Spirit Keeper
K. B. Laugheed

The Clan of the Cave Bear
Jean M. Auel

When We Were Orphans
Kazuo Ishiguro