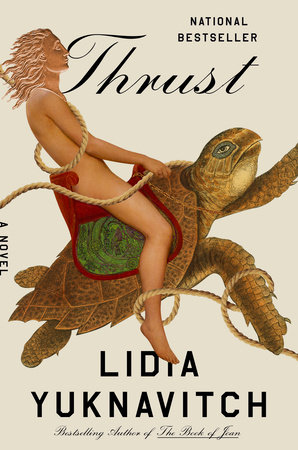 1.     The book begins with the perspective of workers assembling a large statue of a woman that closely resembles the Statue of Liberty. What does this story line suggest to you about the idea of freedom? How did learning about each of the workers’ stories shape your understanding of the statue and its story? What did you think of the contrast between sections told from the perspective of the workers and sections told from that of Frédéric, the sculptor?
2.     Another story line involves letters between Frédéric and Aurora, his cousin. What surprised you about their relationship? How do the letters help unfold Aurora’s views on bodies, and specifically the way female bodies are objectified and commodified? Do you agree with Aurora that Helen Jewett’s use of her body as “a means of resistance . . . to reproduction in favor of capital” is inspiring? What would a better world for women’s bodies look like?
3.     Laisvė can not only travel through time but also communicate with other life forms—be it Bertrand the turtle, Bal the whale, or earthworms. What do nonhumans have to teach her about human life? How do their existence and perspective differ from those of human beings, and how are humans responsible for causing them harm? What might we learn from nonhumans?
4.     In the children’s facility, Mikael meets a violent boy and thinks that “there were boys like William everywhere, their hearts hollowed out by the world around them, willing to join or do anything to disrupt the landscape they’d been handed.” Later, Laisvė visits young Joseph after his father dies, to keep him comfort and carry him, as she says, “through this grief so that you don’t die or become terrible.” What do these events suggest about the destructive power of grief or pain? What questions do they raise about boys and men and their capacity for violence?
5.     In the short sections called “ethnographies,” the book presents the perspectives of people on the margins. Did you recognize familiar stories in each of these? What do they have in common? How are they in conversation with the story of the statue and the other story lines?
6.     Laisvė can travel through time only when she is also in contact with water. She finds herself swimming in oceans, in the belly of a whale, and even in a shower. What role does water play in the book—as a medium for birth and creation, and sometimes for destruction and death?
7.     Before surrendering herself to Aurora, Lilly wonders: Would she like to try stepping into her own dream? Into a space that has haunted her body as long as her body’s memory? . . . Was it possible she could reach her own deepest pain through pleasure? What does the book suggest about the body’s connection to the mind and spirit? How do our physical experiences shape both our bodies and our memories? What do you think of the role of pleasure in the book? Of pain?
8.     “We’re all holding so many stories in here,” Mikael says, pounding his chest. “All of us. I could tell you one of a hundred different stories.” Stories in all forms play an important role in Thrust. How do various characters use stories to shape the world around them or connect with others? How do stories form the basis for identities, for myths, for good or for bad? Did this book change how you think about what we do with our own stories?
9.     In the past, Aurora feels very strongly about taking care of the children in Room 8. In Mikael’s story line, he longs to reunite with Indigo and care for her. When Laisvė is a child, Joseph feels compelled to care for her. At the novel’s end, Mikael and Laisvė care for large groups of children in habitat homes. What role do children play in the story, and what does this emphasis on caretaking suggest to you? What do the children represent to their caretakers, and what do they represent for you? How does the Coda shape your understanding of the place of children?
Learn More About Thrust
print

The Women of Troy
Back to Top